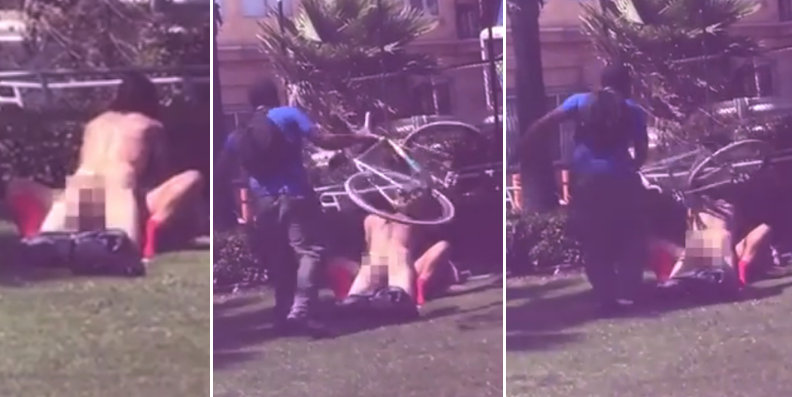 All three clips came out of Britain (you bloody dirty Brits!) but now an American couple have got in on the act with a public romp of their own. There’s a stark difference in the way the bystanders react, however.

In the British videos, the reactions range from shocked to amused (a bloke even rocks up with an goddamn accordion during the pub-shag scene) but in the one from the states, the onlookers are bloody furious. It is a pretty high key location, to be fair…

In this clip, the couple are going for it in a corner of a public park and by the pace of things, the fella appears to be approaching the vinegar stroke. But then, all of a sudden, a bloke with a bicycle emerges and proceeds to whack the guy over the head with it!

His body (and probably dick) goes limp as he takes the full force of the bicycle wheel to the head. The poor chap never even saw it coming. The UK Ryanair flight: look at this lad trying to get a sneaky pic

Weirdly, the bloke that used the bike as a weapon walks away without it and another guy picks it up. It’s unclear if these two know each other but if they don’t, that’s a pretty crazy thing to do with a random person’s wheels!

I get that some people might be extremely disturbed by the sight of a couple of strangers getting it on in public, especially in the middle of the bloody day, but I’m not sure twatting them over the head with a bicycle is the answer… CHECK OUT THIS MADNESS ON THE PLAYER BELOW: