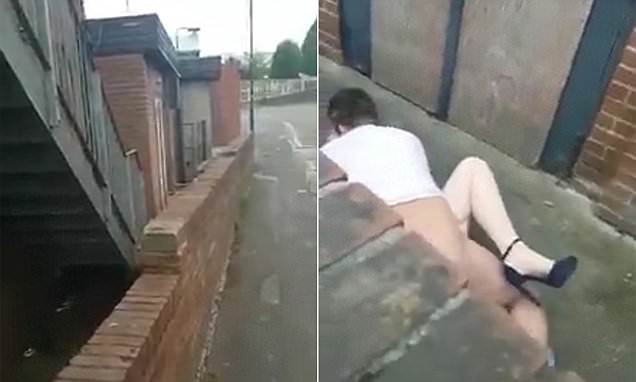 If you get randy in public surely there’s always somewhere nearby where you can have a quickie? I mean surely! A friends house? Go to a hotel or a motel or even to a secluded park? I mean how desperate would you have to be to have sex just off the road, on concrete of all things… near a church…

Well one couple in the UK, in a town halfway between Shafton and Penistone (that’s actually correct look it up!) called Barnsley, were caught having sex in the dodgiest place ever! A man called Denzill Smith spotted the duo and started filming the action. Judging by his reaction, it doesn’t sound like it’s the first time he has spotted this kind of action up close and personal.

Father-of-two Denzill actually sounds like he is a budding documentarian! He starts the filming a little way away from the action, which we all know is a good tactic to build suspense. He then starts doing a pretty spot-on David Attenborough impression. He says ‘Today on planet earth in Barnsley, Wellington Street, we have a rare mating ritual between one hippopotopig and one female rhinoceros.’

The couple were filmed in broad daylight around 6:15am, so they were probably still drunk, having been up all night.

Denzill continued: ‘I’m guessing with how sneaky they were about it they were a real couple who were caught up in the moment. It was funny and I’m glad that lots of people who watched it thought it was hilarious, too. But they should really have found a room to go back, though behind a wall is better than in full view of everyone, I suppose.’

Check out the raunchiness here: