Bloody Maccas. You all know what it is. We do too, and we reckon that anyone who’s not quite sure probably wouldn’t be reading this. With that said, the restaurant under the golden arches holds a kind of magical place in the pop consciousness. So, when people who’ve worked there started sharing the secrets they’d found inside Ronald’s house of fun, we knew we had to share.

As you might imagine, the stories shared were many and varied. Despite that, though, there were more than a few that were recognised by other former employees. Have a read and let us know what you reckon.

“I worked at McDonalds when they first introduced sweet tea and remember that it was brewed in a large bucket mixing hot water with a full bag of granulated sugar. It makes me sick to think about but I still sometimes crave that disgustingly sweet tasty garbage.” – The Gingernational 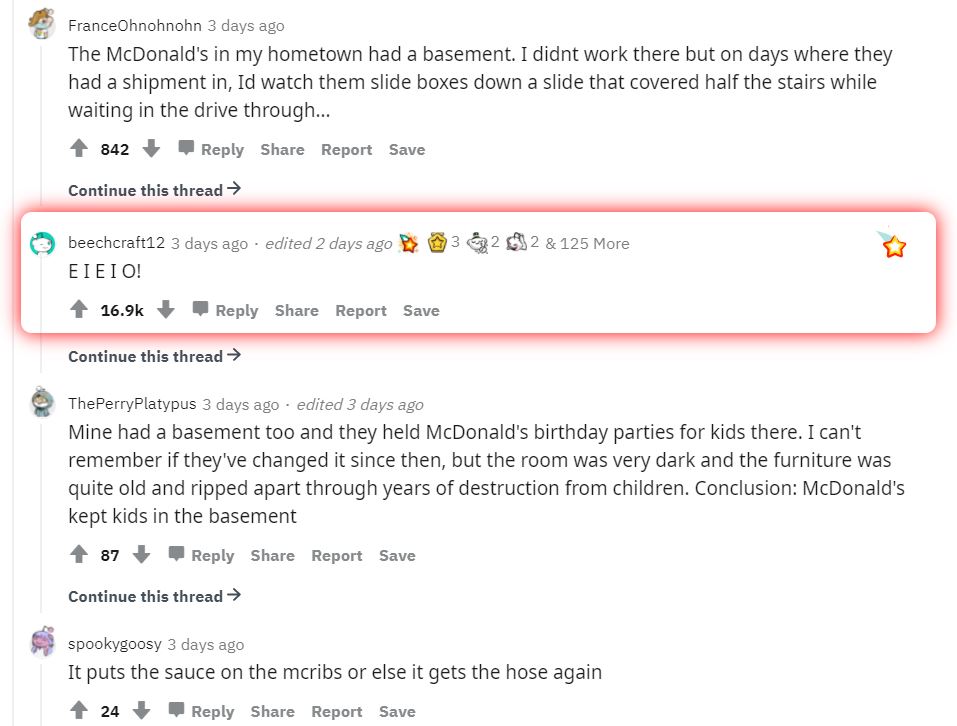 “Mine had a basement too and they held McDonald’s birthday parties for kids there. I can’t remember if they’ve changed it since then, but the room was very dark and the furniture was quite old and ripped apart through years of destruction from children. Conclusion: McDonald’s kept kids in the basement.” – ThePerryPlatypus

As you can see, some former employees claim that Maccas twenty-four hour carpark is the go-to place for some of society’s less savoury characters.

“Depending on which one you work at, the parking lot is basically a meet-up for druggies/drug dealers and (at least where I was in New Mexico) people to meet up and have sex in their cars. As long as they kept their business to the middle of the night and didn’t cause any serious problems, we were told not to call the cops or make a fuss, mostly because they’d come in and buy food after their shenanigans. Soda and mini pies were really popular with heroin addicts. What I later found out is that management was actually told to let it slide by corporate, since everyone higher up was aware of how much money the “night crowd” brought in. I got to see many, many drug deals. I’m convinced I saw at least one arms deal, but I of course have no way of verifying that.” – Weird_Church_Noises

On top of that, there’s also plenty of stuff going on behind the scenes that you might not be aware of. Don’t get us wrong, we all suspect that some of those kids are up to mischief, but seeing it in writing really makes you question your next order.

“Sauces for sandwiches have the craziest dispensers. Ketchup and mustard are in these really rudimentary plastic funnel things that have a paddle in the handle, when you squeeze it gravity pushes just the right amount of sauce through holes. Doesn’t seem like it’d work well but it does if you apply the proper amount of jigglin.

The Mac sauce, mayo, and tartar though, they’re in basically caulk tubes that get loaded into basically caulk guns. You pull the trigger on the handle and a reeeeaally satisfying ratchety clanking delivers a powerfully saucy surprise for the awaiting buns. Problem is, it takes a bit of finesse because if you hit that trigger too hard you’ll blow the bun and the wad of creme right through the condiment station and onto the wall 8 feet away. No joke, the first couple tarter splurts of a fresh tube came out so hot I’d fire a shot or two in the trash to avoid premature splatulation during the lunch rush. The first salvo, properly elevated and adjusted for wind, could clear the whole kitchen and take out the McInfantry on the cash register.” – ThomsomC 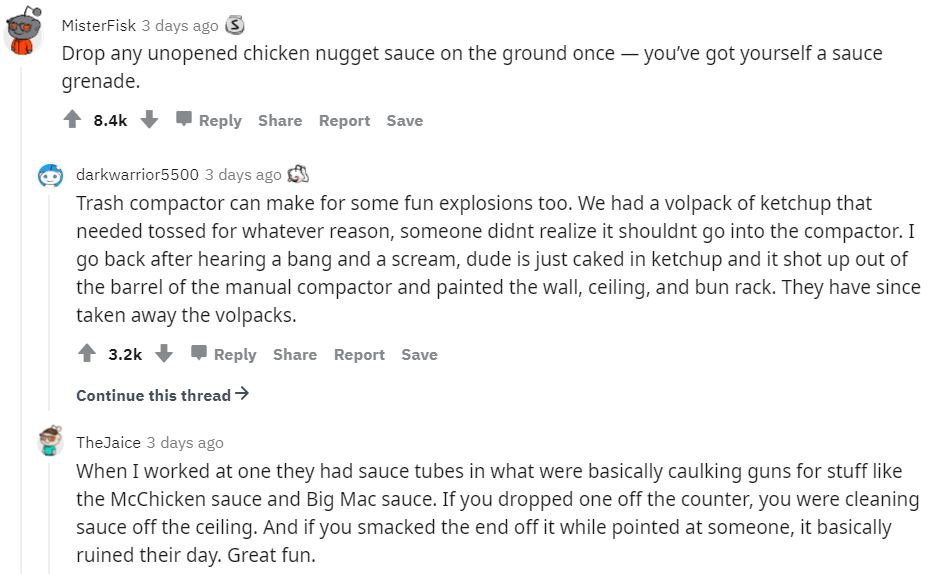 “Worked there in high school. Found out that if you put the middle of a Mac bun in the fryer and then add soft serve and strawberry topping, it tastes just like a funnel cake. Custom creations were the best part of working there. Edit; I have thoroughly enjoyed hearing about all of your own custom creations. You have all made my work day much less boring, so thank you!” – Abbazabba

On top of that, there are a few tales about the kind of people who visit Maccas. Unsurprisingly, the world’s most recognisable ‘restaurant’ attracts more than its fair share of interesting characters.

“This comment made me forcibly remember the time my night shift manager literally conducted a meth deal in the doorway to the restaurant and when she caught me looking she made me clean the oil drain pans with a toothbrush among other things and told me if i ever told anyone she’d make my life a living hell. She ended up showing up on my high school campus for one reason or another and i quit the next day.” – DeagleGoddess

“Mid-night shifts were draining but so much fun, the kitchen staff is cut by half but the people who order are so funny.” – Thesolmesa

Final thought: Yeah, nah, we don’t reckon there’s any doubt that Maccas is an interesting place. It attracts all manner of people. Still, we don’t reckon that’d actually stop anyone going there. Sometimes, you’ve just gotta go where it’s easiest. Don’t you reckon?