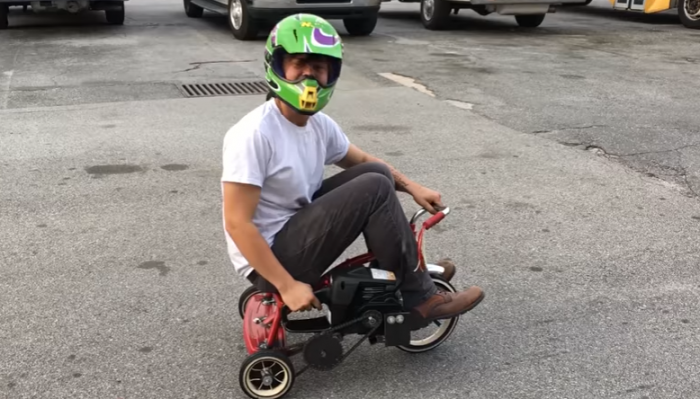 Two Guys Put A F*cken Chainsaw Motor On A Trike!

Two dudes from Georgia Tech have upped the bar for uni hijinks and have created a chainsaw motor powered trike for cruising around campus. Although trikes are normally reserved for kids who haven’t yet learned to sh!t in a toilet, these guys saw something more from trikes.

I too would like to live in a world where trikes can go 30km an hour, except maybe not in the hands of toddlers. Those little pooping b!stards shouldn’t have that much power.

So the Georgia Tech lads did some impressive looking things with some metal bits and some welding and some rods to put the trike together. Also there’s definitely some WD40 there. I don’t know much about building a trike, but I know that once you got WD40 on board, you mean business. Despite their trike mods looking pretty boss, they did in fact neglect to create any brakes for their death machine on wheels.

You can hear one of them describe the lack of brakes on the trike as “f!cking terrifying”. I can see why they couldn’t have brakes though as you’d probably hit the road face first if you had to brake quickly.

The video was posted by ThisDustIn on Youtube, and they’ve done some other top notch videos including ‘Casting an Aluminium Slingshot’, ‘DIY Arc Welder’ and ‘Battlebots at Motorama’. My question though is how these guys still have all ten fingers? Their limb-threatening antics make for some pretty compelling viewing though so you know, good work lads – keep up the good work and maybe invest in some gloves sometime soon. Also just as a fun fact, my cousin Andrew did this once with his BMX back in the mid-90s. It worked pretty good until he was picked up by some of Australia’s finest boys in blue and he was politely yet firmly advised that should he use his modified bike again on the road he would be receiving a fine so large it would rival Greece’s national debt.

Anyway you’ll want to check out the end of the video where they have also modified a fisher price car for getting around campus.