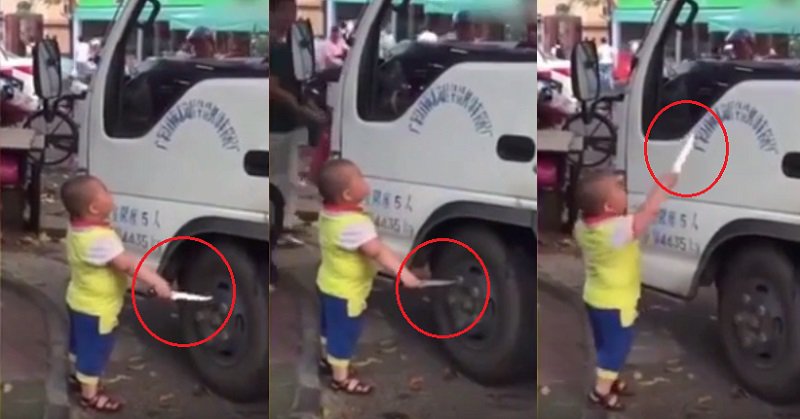 In this clip, a five-year-old kid, nicknamed Xiao Pang, can be seen waving a fruit knife at a truck driver next to his grandma’s street stall in Xinjiang province, an autonomous territory in northwest China.

Xiao Pang, wearing a yellow vest and blue pants, angrily glares at the truck driver and threatens to cut their tire because it was blocking his granma’s stall.

The feisty little fella shouts “You can’t park here! If you park here, I will beat you up!” with his knife pointed at the driver’s side window and one sassy hand on his hip. It isn’t the first time that the brazen young lad has gone viral; Xiao Pang could be seen in a previous video waving a metal pipe at the local police as he defended his grandma’s stall.

On that occasion, one of the cops backed away as the little lad shouted and dipped his head in an attempt to appear threatening. He then he threw his silver pipe down on the ground, puffed out his chest and continued gesturing wildly at the crowd in front of him. With the situation seemingly diffused, another officer approached the kid and sat him down on a couch but Xiao Pang was having none of it and slapped him away in disgust.

This kid may well end up becoming the hero we all need in this world of ever creeping totalitarianism. He may grow up to be a defender of the average person’s civil right and fight corruption for the good of all mankind. Or he may end up being a fucking psycho. Only time will tell.

WATCH XIAO PANG DO HIS THING ON THE PLAYER BELOW: