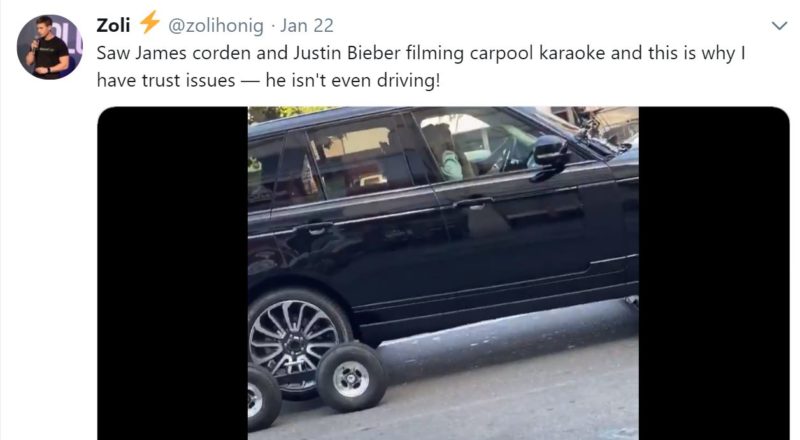 Despite our wealth of knowledge, advanced technology, and certainty that humans are actually pretty friggen smart, we’re occasionally left shaking our heads when something that should be common-sense turns out to be a huge surprise! Take for example, James Corden’s Carpool Karaoke. When you find out that the dude’s not actually driving, most of you would go, “Yeah, durr.” Note that we say ‘most’ of you…

The reason we’re mentioning this now is that some footage definitively proving that the talk show host isn’t doing anything as reckless as driving while singing songs with celebrities has gone viral online. 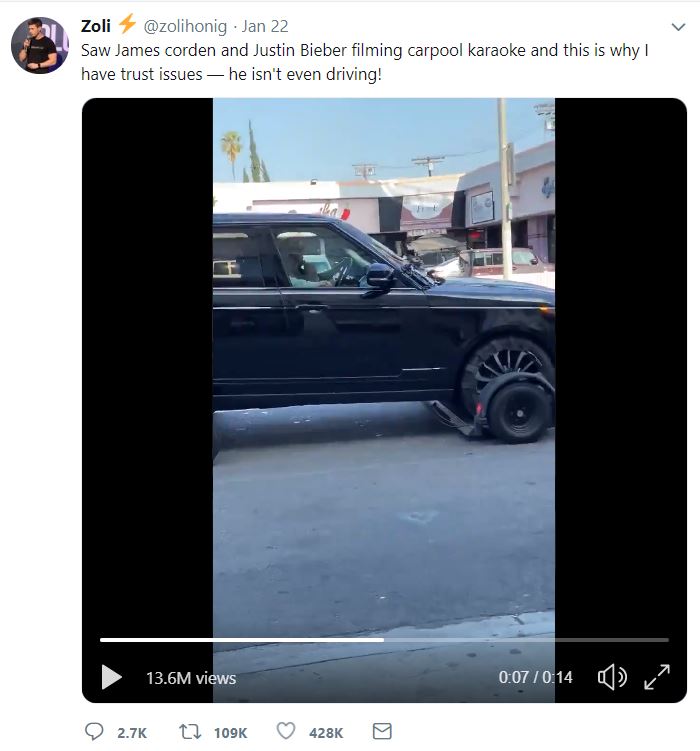 Yeah, nah, a bloke named Zoli Honig sprung Corden and Justin Bieber as they were filming a segment in Los Angeles. In the vid, you can hear someone – presumably Honig – announce, “Yo! It’s the Beebs! Doing Carpool Karaoke!” 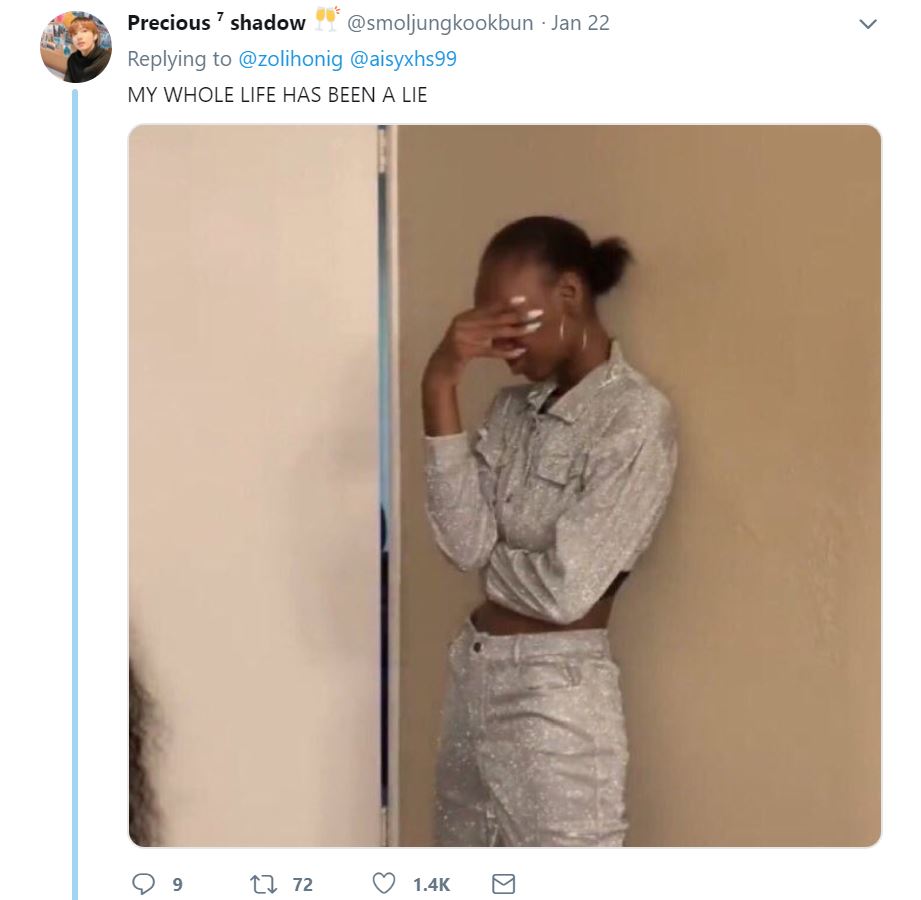 As the camera takes in the whole car, you can see that’s actually chocked up, being towed along. Now, this is obviously a smart move. You need to be paying attention to the road, and it’s not like the program needs to be responsible for an accident.

In fact, we reckon that most people had figured out this was a bit of movie-magic long ago. Of course, the internet never disappoints. While we’re happy enough to give old mate Zoli a pass – seeing as he filmed the video – some of the reactions are gold.

When he posted it online, he wrote, “Saw James corden and Justin Bieber filming carpool karaoke and this is why I have trust issues — he isn’t even driving! Next thing you know they gonna tell us that his friends don’t *actually* need a ride.” 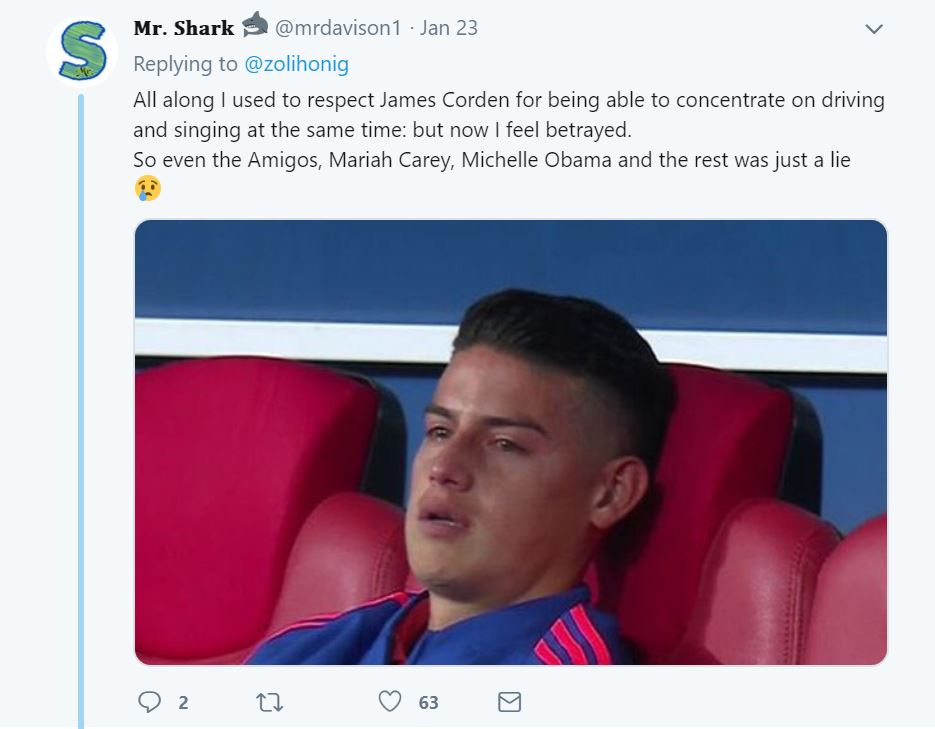 From there, the responses were somewhat predictable, and a little disheartening. Naturally, there were plenty of people who were able to make light of the situation with some gentle sarcasm, but you can’t tell us that some of these responses aren’t legit.

According to the producer on these accusations:

“Not true!” he said to fans claiming the video proved Corden never drove the car. “We only use a rig when we are doing a ‘stunt’ as part of the Carpool – when it would be impossible for James to drive! This has occurred only maybe 4 times in 50 or so carpools… Safety is key!”

Final thought: We always wondered who those people who needed to be told that satire was, well, satire were. Now we know. Just remember, folks. Question everything. If it’s a filmed segment of a television program, it’s probably filmed under pretty tight conditions. So, time to own up…who thought it was real and Corden was actually driving? Let us know in the comments.

Saw James corden and Justin Bieber filming carpool karaoke and this is why I have trust issues — he isn't even driving! pic.twitter.com/bkP9moGJmu

guys, we don't even use a real car pic.twitter.com/O0sxMwNFtP

Back when Shrek first hit the screens, it blew minds with its clever-as-f**k fracturing of everyone’s favourite fairy tales, spot-on humour and kick-ass story. Deadset, this one pretty much broke the mould for CGI mov...