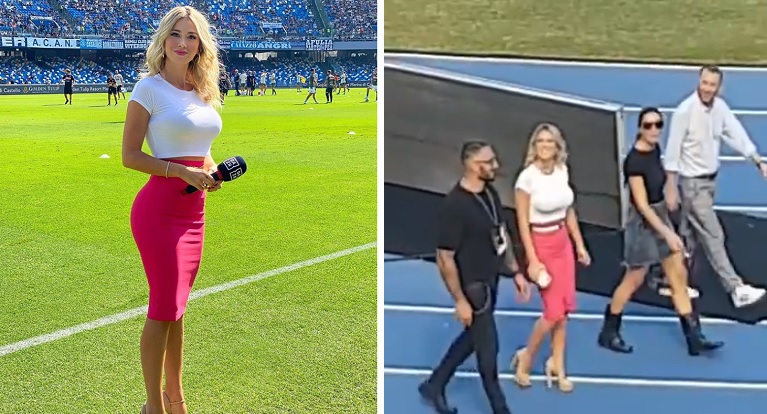 Today’s yarn comes all the way from Italy, the land of wine, pasta and crazed Soccer fans. Among many other beautiful things like the Vatican and the Colosseum, Italy is home to a young sheila named Diletta Leotta.

Diletta has close to 5 million followers on Instagram, she’s a Broadcaster for DAZN Italia, and graduated with a law degree in 2015. She’s doing beaut career wise no doubt about it, and a national treasure as far as Italy’s concerned.

But Diletta has been thrust into the global spotlight recently; she was at the Stadium of San Paulo reporting on a soccer match when a bunch of Napoli fans got a bit rowdy and inappropriate.

Now I reckon Diletta would be used to creepy AF “dudebros” trying to slide into her DM’s. She’s probably got a s**t tonne of verbal smack-downs ready to go at any given time, so when some tossers started shouting out, and chanting unsavoury requests at her, she barely batted an eyelid.

On the clip, I can’t understand a bloody word the blokes are yelling out, but I believe the translation goes a bit like this:

“Kindly remove your shirt and bra and put your chest on display. Please and thank you.” – Or words to that affect ay.

Now I don’t wanna start a bloody racket about double standards and sexism and all that politically correct BS, but these blokes acted like absolute f**ken pigs. There, I said it.

And I’d be saying the same bloody thing if a bunch of sheila’s were chanting out loud to the male commentator “take your d**k and balls out champ!” Promise ya.

Diletta handled this situation with a s**tload of class, teamed with a high level or professionalism. After she made the “thumbs down” gesture, the chanting hooligans shut up pretty quick… I’m tipping they don’t wanna be blocked from her Insta account for obvious reasons.

Check out the clip and let’s us know what ya reckon in then comments.