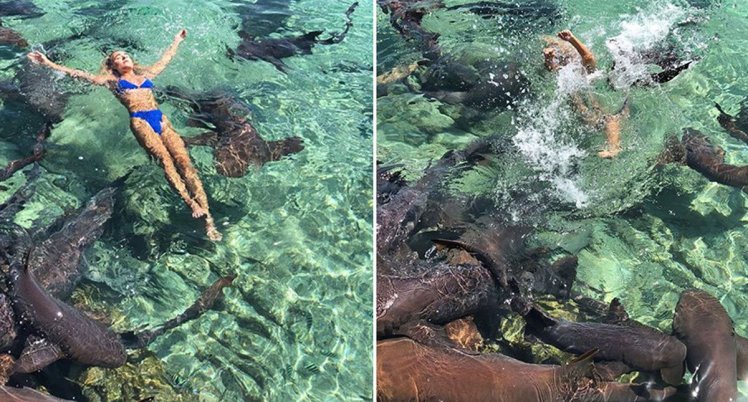 Instagram model bitten by sharks while trying to take pictures

Bloody hell, sometimes you’ve gotta shake head when you see these stories, you really do. Have a look at this… if I said to you, ‘hey mate, those sharks are having a feed right now. Pop in there, have a bit of a dip and we’ll get some great photos,’ you’d rightly tell me to play in traffic. Not everyone’s like you though. Just ask Instagram model Katarina Zarutskie…

Nineteen-year-old Katarina Zarutskie, an apparently fearless Instagram model, was in the Bahamas when she decided she needed to get some photos of herself swimming with a pack of nurse sharks. 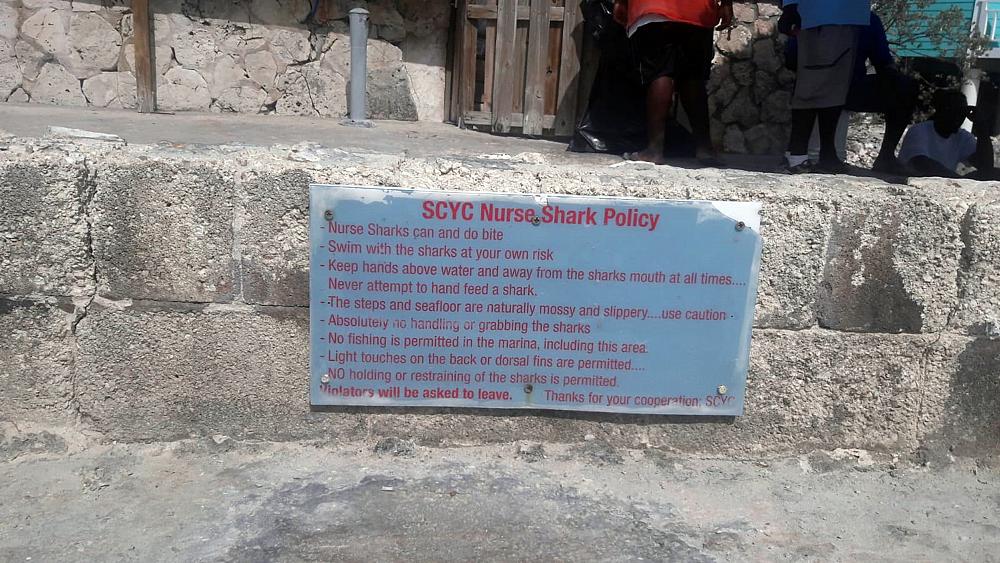 Nurse sharks are usually pretty docile animals and the young lass grew up in a surfing community so she wasn’t at all perturbed by the prospect of jumping in the drink with the predators. 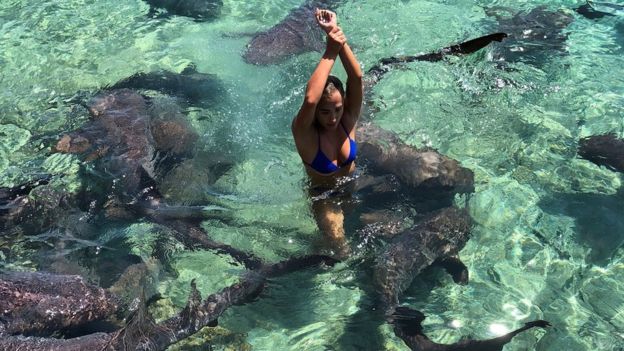 See! Nothing to worry about. Credit: Katarina Zarutskie

But perhaps she should have been. You see, there are signs at the marina to warn people that the nurse sharks, like any wild animal would, do occasionally have a nibble. Well, Zarutskie, saw that sign and thought, yah, nah, they’re full of sh*t. Oh, and it was feeding time. So she jumped in the water with a bunch of hungry sharks grabbing at whatever they could fit in their gob. 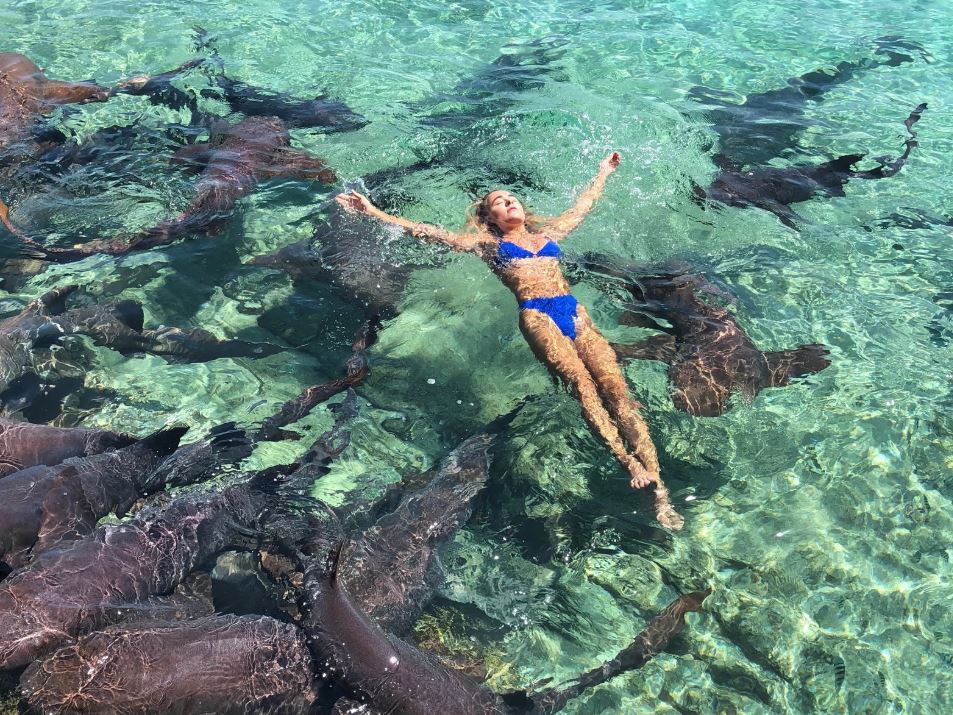 Needless to say, she got f**ken bitten. Again, it’s the old line here that we like to give everyone a fair go, but the sharks were eating when you jumped in the water. The. Sharks. Were. Eating. You don’t go near a dog you don’t know when it’s eating, let alone a bazillion f**ken sharks. Seriously. 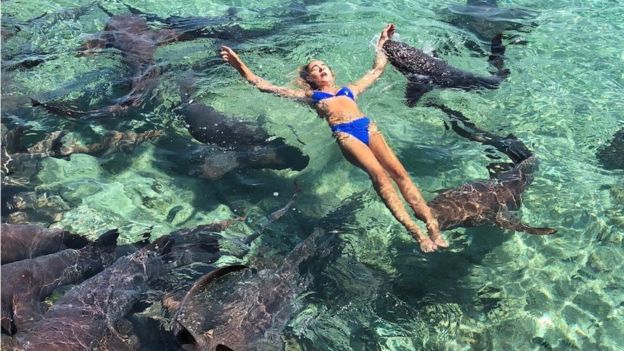 Anyway, Zarutskie’s boyfriend’s old man was taking photos for her Instagram page when the shark struck. It grabbed her by the wrist and pulled her under the water. Who knows, maybe the shark wasn’t trying to eat her and maybe it just needed a hand with something.

Anyway, it must have thought she tasted like sh*t because it let her get away pretty easily. She was able to yank her wrist out of its mouth, but she has been left with a bite-mark that ought to scar nicely and give her a good story for the grandkids. 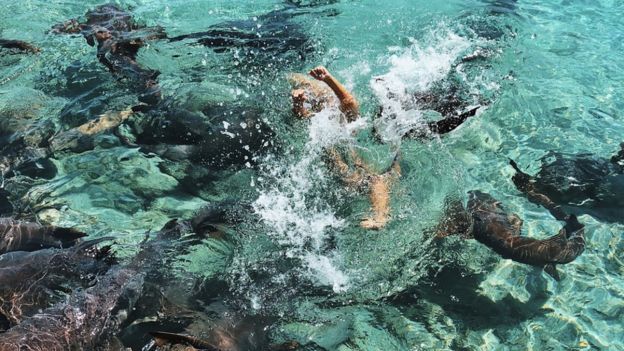 Her boyfriend, who had apparently warned her about going in the water, now has a lifetime of ‘I told you so’ to use on the silly bugger. 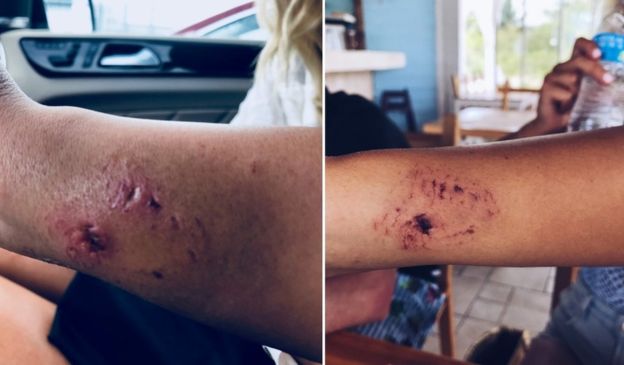 Yeah, all right. It’s hardly life threatening. More like a tap on the wrist for being so reckless. Credit: Katarina Zarutskie

Final thought: Look people, unless you really want to put the ‘feed’ into ‘Instagram feed’, use your common sense and don’t go in the water where bloody sharks are having their dinner. Also, let’s be realistic. Some sharks are bloody frightening, but to say this one was life-threatening isn’t really fair to the sharks. We all know a shark attack should only count if it results in severed limbs!

For you, Katarina, there is a Good Onya award in this. Bloody Good Onya, ya silly duck.