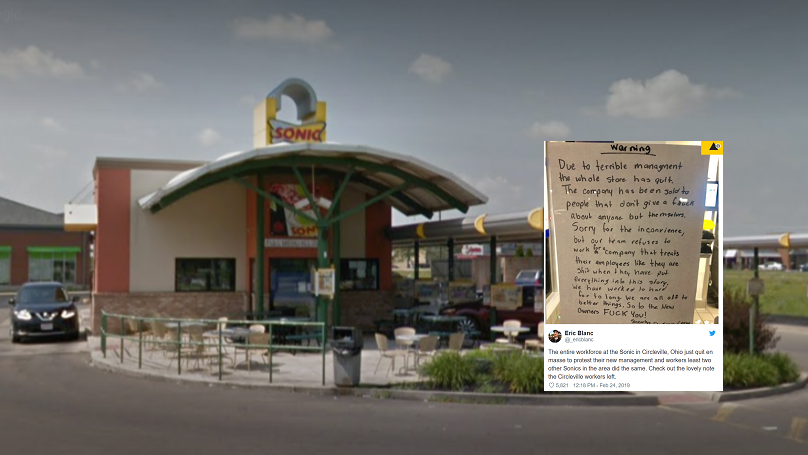 There would be nothing more epic than to really give ya boss a piece of ya mind when you’ve had enough. Imagine givin’ your s**tty boss the finger, storming out, throwin’ stuff as ya go, yelling “I quit!”. Sadly most of us have bills to pay and mouths to feed, so it’s not always an option. But the crew at Sonic Drive-In in Ohio U.S, gave zero f**ks as they told their bosses where to stick it.

The staff at Sonic, Circleville had their knickers in a knot due to new management and changing conditions.

A spokesperson from Sonic explained:

Under new management, guests and the community can look forward to improved service and the famous food, beverages and treats for which Sonic is known. 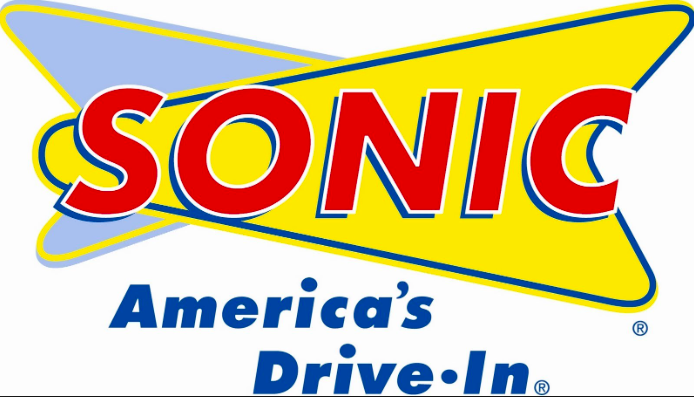 Despite this being said, it seems the staff are being treated like crap, and they were havin’ none of it! There was also talk that their pay had been cut to below minimum wage, but the big bosses at Sonic said that’s bulls**t.

No wage rates at any level have been decreased in this transition.

In a show of solidarity, the entire crew that day walked out in protest. But not before leaving an expressive note that clearly articulated all their concerns taped to the drive-thru window:

Warning, due to terrible management the whole store has quit.

The company has been sold to people that don’t give a fuck about anyone but themselves.

We are sorry for the inconvenience but our team refuses to work for a company that treats their employees like they are shit when they have put everything into this store.

We have worked too hard for too long. We are all off to better things.

So to the new owners, FUCK YOU! Sincerely, Ex Sonic Crew.

How’s this taped to the window! haha!

The entire workforce at the Sonic in Circleville, Ohio just quit en masse to protest their new management and workers least two other Sonics in the area did the same. Check out the lovely note the Circleville workers left. pic.twitter.com/onSNUMImMb 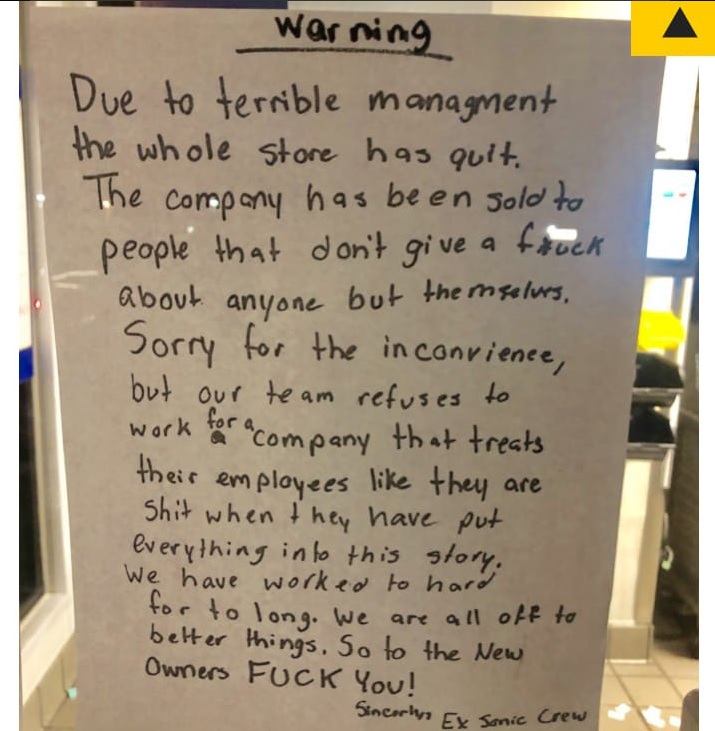 And it seems the crew at Circleville are not the only one’s cracking’ it!

Final Thought: I’ve got no time for “the man” and how some of these corporate bastards treat their employees like crap. A lot of the staff are probably just kids, going to college and tryna make a few bucks to buy a box of goon for the next frat party. And if it’s true they are trying to get away with less than minimum wage, that’s s**thouse and completely unacceptable.