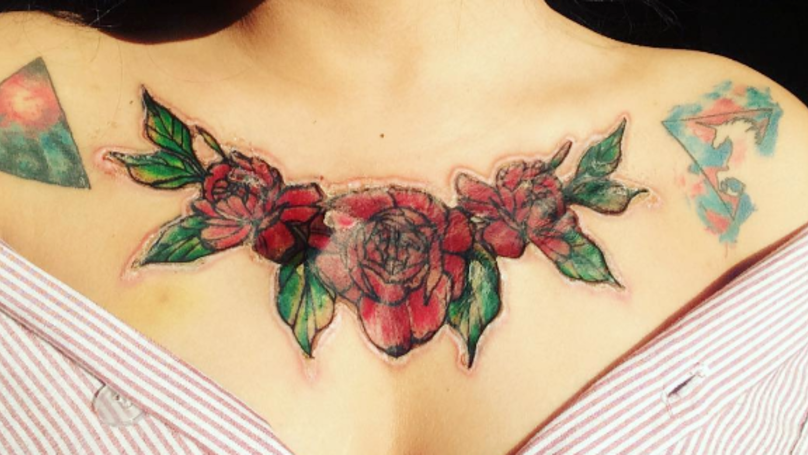 GRAPHIC: Woman Has The Most Horrific Injury After Getting Tattoo Removal!

I don’t have a tattoo and I don’t plan on getting one but the internet that says 1 in 4 people under the age of 30 have at least one tattoo. They have been on the rise in the past decade and it seems every man and his dog has one now. Well, one in every 4 men and probably not the dog, but you get my drift.

The problem that arises with the amount of tattoos in the world is that the number of really shitty tattoos (by virtue of mathematics) is also going up. Got a tattoo on your face? You’ll need to get rid of that to get an office job (most of the time). Got a tramp stamp, and you are a guy? Well, I don’t need to say but I’m sure you are comfortable enough with your sexual orientation. Got a tattoo of your lady friend before she slept with your best mate? Well, that’s just f*cked.

My point is that all of these tattoos need to go and as a result tattoo laser removal places now a huge business. But why go there when you can just use a tattoo removal cream? At least thats what the advertisers of such products might say…

One woman, Pasuda Reaw decided that rather than go down the traditional laser removal route, she would use a tattoo removal cream to get rid of the ink on her collarbones and chest.

Things seemed to start out OK…

But then f*ck me, things went south quickly…

Eventually the skin hosting the tattoo ‘peeled off’…

This is the scar, months down the track

Biobiochile.cl reported that Pasuda shared her photos to warn others about the dangers tattoo removal can carry. F*ck me, message received loud and clear, thanks for the heads up Pasuda.