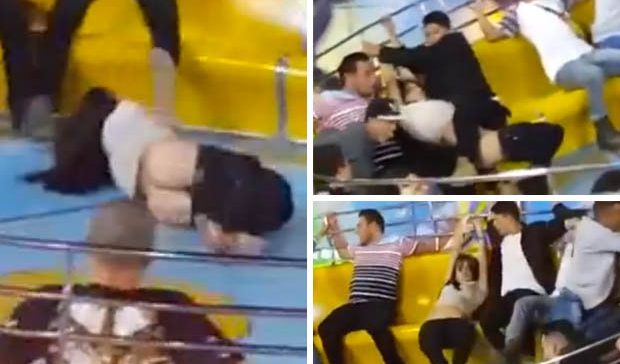 Are you planning a fun and semi-romantic date to a carnival or local fair? Have you considered telling your significant other to ensure they wear underwear, or are you planning for some easy-access fun? Apparently if you don’t want the rest of the crowd to see more than they’re supposed to you should probably choose to wear some; if this video can teach you anything it’s that, but in the funniest way imaginable. One young Costa Rican couple decided to hit up a carnival together for a night out. They grabbed some finger foods, toured the grounds and eventually came across a few rides they wanted to try out. They decided to ride the La Tagada, a circular ride where you sit and hold on while being spun and tossed around a little bit. Well, when the ride began moving it became apparent that the woman’s pants were rubbing against the seat the wrong way and were slowly but surely being pulled off! Noticing the plight of his girlfriend the man attempts to use his legs to cover her lower half and keep the pants from falling down further. What does he get for his troubles? He accidentally pushes her on top of another rider right as the Tagada begins bouncing them up and down! Talk about some bad luck. Then, as though that weren’t enough to secure the most embarrassing story of the night award – his legs in combination with the ride wound up kicking her off the seat, bare ass displayed for the rest of the world in full view as she wasn’t wearing anything underneath. You can hear the exact moment it happens because the crowd absolutely loses their collective sh*t.

Check out the footage on the player below:

Yeah, nah, there’s nothing cooler than someone doing calming and serene s**t in the midst of a chaotic background. When you see it in movies, you’re just like ‘f**k yeah’, so it stands to reason that when it happens i...