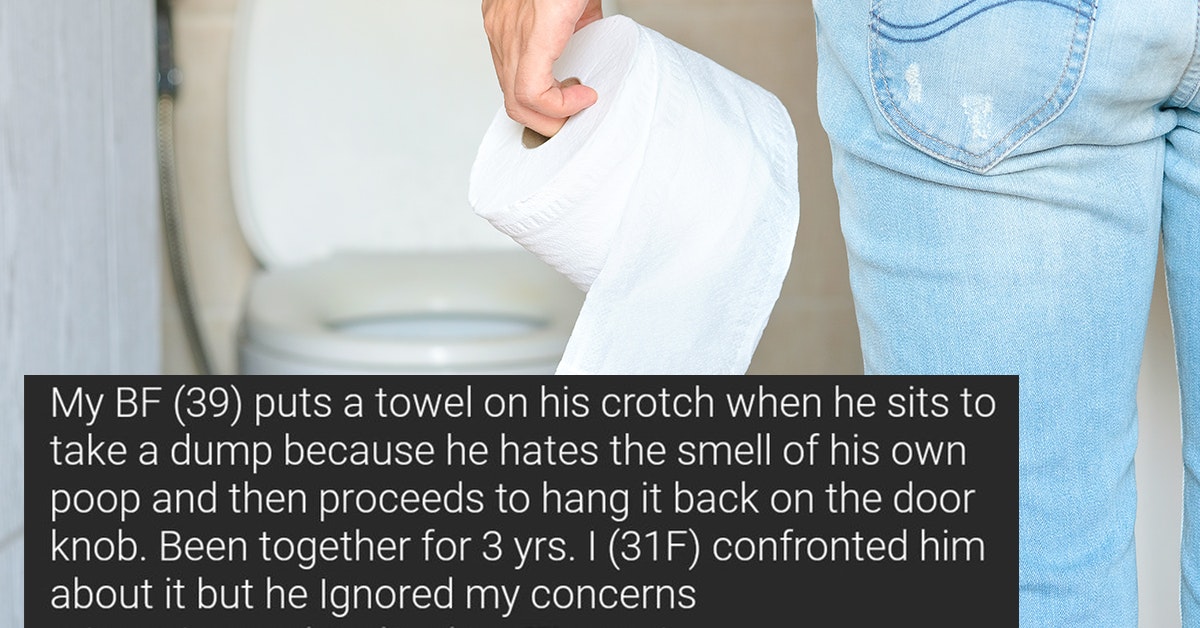 We know this is always a bit of a contentious statement, but we reckon there are some things in a relationship that should remain private. Yeah, nah, there’s no way that everyone needs to hear your dirty laundry. Still, despite that s**t, some people really need to vent, and that’s where the internet comes in. For today’s story, one sheila needed to vent so bad that she got her man’s dirty, dirty laundry out for everyone on the internet to see. Check it out…

All right, rest assured, this isn’t one of those ones that we’re just gonna re-tell for you. Nah, there’s no need. We’ve got all the quotes you can need right here. A sheila going by the handle of pndita_ took to Reddit to share the following:

“My BF (39) puts a towel on his crotch when he sits to take a dump because he hates the smell of his own poop and then proceeds to hang it back on the door knob. Been together for 3 yrs. I (31F) confronted him about it but he Ignored my concerns.”

This is gonna take some creative problem solving, but fortunately reddit is her eith the assist. pic.twitter.com/LiKORoMVgk

OK, so the first thought we’ve got here is that it’s a bit weird, but whatever, if it works for him that’s fine. Still, we’ve gotta say that hanging that thing up on the doorknob everyone has to touch is a bit bloody cheeky, Anyway, let’s allow pndita_ to continue.

…on the DOOR KNOB??? The DOOR KNOB??? Why can’t they just put up a little command hook specifically for it if he has to have this towel? Or get some poopourri or something instead? I am absolutely baffled by this post. pic.twitter.com/OQaotKc20Z

“I found out one day ‘cause I accidentally opened the door and I saw the traumatizing image in front of me. After he was done, because I do respect the pooping time, I approached him and told him what the heck did I just watch? Then he explained me the reason and I mean I get it but still told him that it’s disgusting that he hangs it back on the door knob because I’m sure the towel keeps some of the disgusting smell of his own number 2. He agreed and told me he was not going to do ever do that again because yes it’s gross.”

Look, we can see where this is going and so can you, but some things don’t need to be shared. Do you really need to see your partner while they’re laying cable? We don’t know about you, but we’d be mortified if our sheilas walked into the low while we were pumping an after-grog-bog.

“Today I opened the door by accident (I thought he was in the kitchen) and saw the traumatizing image again. I confronted him about it and now he completely changed his words and claims that it’s his towel and he can do whatever the heck he wants with his towel. Idk what to do, we only have one bathroom and idk how to approach this…”

As you can imagine, people had ideas about how she should approach it, but we’re gonna throw it across to you lot. We wanna know what you would do.

Final thought: Yeah, nah, you know what we’re gonna do now. Jump into the Facebook comments and tell us what you’d do if this is what your other half was doing. And, f**k, let’s face it, maybe they are. If that is the case, you may as well tag ‘em and shame ‘em out. Go for it!

My BF (39) puts a towel on his crotch when he sits to take a dump because he hates the smell of his own poop and then proceeds to hang it back on the door knob. Been together for 3 yrs. I (31F) confronted him about it but he Ignored my concerns https://t.co/gkdzsjBAzL pic.twitter.com/ra0u6R5VCw