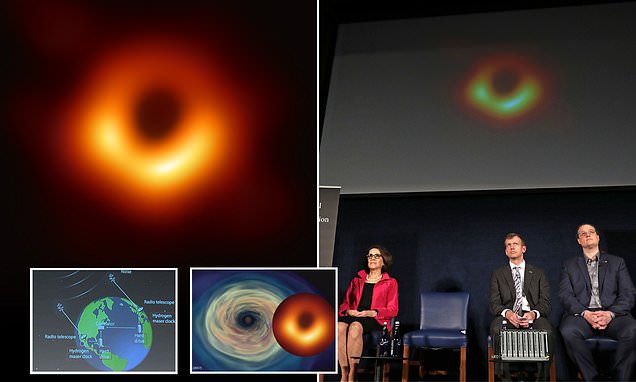 Some crazy s**t happened in the science world yesterday ay! Black holes have always been an ominous mystery of space, supposedly invisible and vacuuming up everything that passes by it, sucked into its murky depths never to be seen again. Black holes have been immortalised as silent and invisible pits of hell in outer space by sci-fi flicks, and they have always been shrouded in mystery for the science community.

But some super smart science blokes and blokettes have made a good start at finding out the secrets of the illusive black hole and debunking the myth that black holes are entirely invisible. With the use of eight telescopes, scientists have been able to record the very first images the Event Horizon and share them with the world.

From Brussels: "Finally! No more simulations. You are looking for the very first time, at a real black hole." #EHTblackhole #realblackhole #blackholecam pic.twitter.com/HH3m4v3fHH

The Event Horizon is basically the edge or the boundary around the opening of the black hole, where light or any radiation can’t escape. It’s the super hot material you see in the images. Any stuff that get’s too close to the Event Horizon, it’s Destination F**ked, all the atoms are shredded and ripped a part and sucked into the black hole. 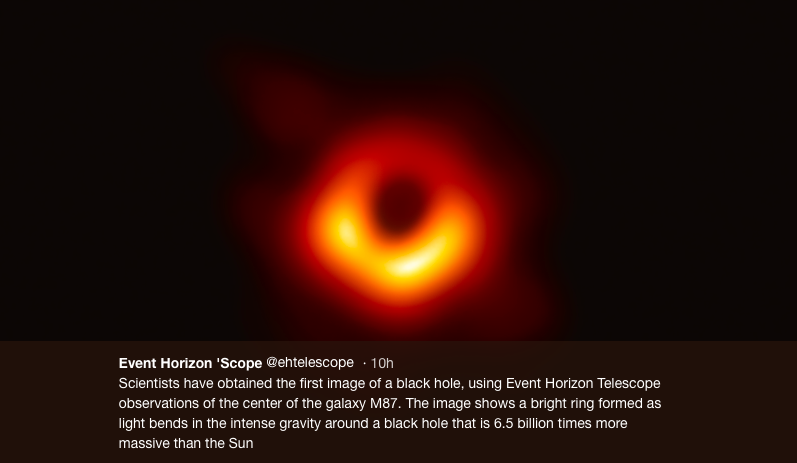 Avery Broderick, Associate Professor in the Department of Physics & Astronomy at the University of Waterloo said:

Sheperd Doeleman who is the EHT Director said:

‘Nature has conspired to let us see something that we thought was invisible… This is a long sought goal for us, and we hope that you’ll be inspired by it too.’

This is one massive task and a bloody huge achievement. Put it this way, the technology to “see” the Event Horizon didn’t exist. Scientist essentially had to create the tech to be able to record the images you see here cause no telescope is powerful enough, or sophisticated enough to record the images. The Event Horizon Telescope (EHT) comprises of eight radio observatories located in the South Pole, Europe, South America, Africa, North America, and Australia. It’s required years of work behind the scenes and the co-operation of scientists all over the globe.

Of the 11 observatories planned for the Event Horizon Telescope array, 8 participated in #EHTblackhole observations in 2017. Here is a collage (with older photos!) from the #NSFfunded animation made at @saoastro, to be found on our Youtube channel — https://t.co/U37EF3IlTI. pic.twitter.com/9UUrynnmvD

This enormous black hole they recorded is located at the heart of the Milky Way known as Sagittarius A, as well as another target area they refer to as M87.

To give you an idea of just how mental this all is, the eight telescopes recorded 5 petabytes of data…. That’s half a ton of bloody hard drives! It’s the equivalent of 5000 years worth of mp3 files, or 40,000 people takin’ a lifetime of selfies. F**k, don’t think Telstra has a plan to cover that amount of data! It’s pretty hard to get ya noggin’ around just how big this bloody thing is, this simple graphic helps a bit for us non-science-y people.

“We now have visual evidence for a black hole, we now know that a black hole exists at the center of M87. Material moving around the black hole is moving at light speeds.

We now have an entirely new way of discovering black holes that we’ve never had before, and like all new discoveries this is just the beginning”

This is obviously global news and even Google is celebrating with an EHT doodle:

Final thought:  A lot of this science stuff goes over my head that’s for sure, but blind Freddie can see this is probably one of the coolest scientific breakthroughs of the century. Its also a good reminder of the stuff that can be achieved when people from all of the world work together for a common goal.

If you wanna read more details about this ground breaking discovery, check out the official website of the Event Horizon Telescope.