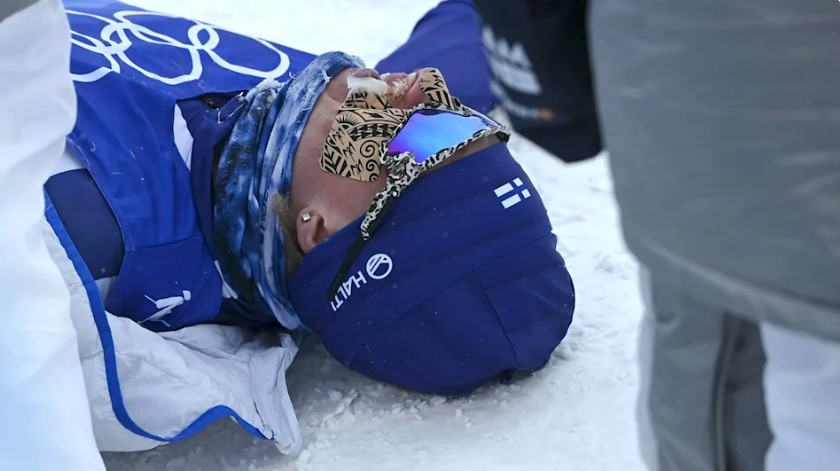 If there was one thing we’d never want to experience here at Ozzy Man Reviews, it’s a frozen d*ck. Yeah, nah, that just sounds f**ken horrible. If you agree, spare a thought for cross-country skier Remi Lindholm. In a 50km race at the winter Olympics he was afflicted with a frozen penis, an iced-up custard chucker, a frosted flesh trumpet. And, get this, it’s not even the first time!

So yeah, before we go on, let’s get one thing clear. We live in a warm climate and we f**ken love living in a warm climate because our love gun is never gonna freeze. Yeah, nah, even the thought of it is f**ken gross. Don’t get us wrong, we know we could google whether or not it looks all frostbitten, but we’re not going to. No one needs to see that.

Still, Remi Lindholm loves cross-country skiing so much that the first time his schlong froze solid, he didn’t f**ken quit the sport. Nah, yeah, he went out there and did it again. And, as you know, it happened again.

⚠️ This information may offend the sensibilities of some people.

🧊 Finnish skier's penis froze in the middle of the competition: "Pretty unbearable pain"@RemiLindholm put a heat bag on his penis after the race.

We don’t know whether that’s a testament to his enduring love of the sport or whether it’s something else, but we wouldn’t be doing that s**t. Still, we digress. This time, the Finn spent just under an hour and sixteen minutes in the freezing cold and howling wind before the painful incident occurred.

Olympic skier Remi Lindholm says it was so cold during a race in Beijing, his penis actually froze. https://t.co/xXa75PPpLi

“You can guess which body part was a little bit frozen when I finished, he told Finnish news outlets. “It was one of the worst competitions I’ve been in. It was just about battling through.”

Once the race was over, he got his love muscle functioning again by applying a heat pack. He said, “When the body parts started to warm up after the finish, the pain was unbearable.”

Final thought: Yeah, f**k, this bloke really loves cross-country skiing. And that raises a simple question: what do you love so much you would endure a frozen penis for it? Let us know in the comments section.