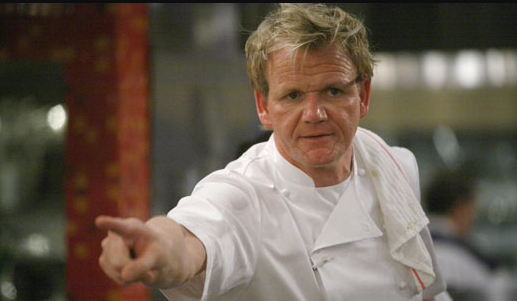 Gordon Ramsay: Why He Makes His Kids Sit Back In Economy While He Flies First Class

Whilst Gordon Ramsay might be well known for swearing, a lot, on TV, he’s never had his parenting style called into question until now. The father of four recently “defended” his decision to get his kids to fly in economy class whilst him and his wife, Tana Ramsay, flew first class.

Why some people are so obsessed with the way celebrities decide to raise their kids, I’ll never understand, but what’s for certain is that Ramsay doesn’t want his kids growing up in the ‘famous for being famous’ category of useless celebrities like, you know, Paris Hilton, or the Kardashian’s.

But it’s not all about instilling a sense of work ethic in the kids, or “keeping it real”. As Ramsay puts it, “I think getting kids at the age of five, six and seven, used to first class and those big seats, they do not need the space, they get entertainment on their iPads.” Granted, it would be handy to be only 4 foot tall on a long haul flight.

Ramsay has also been quoted as saying that his kids won’t be inheriting his fortune. Worth an estimated USD$54 Million, split between his restaurant businesses (including 6 Michelin stars), television production company, books and media licensing, Ramsay is joining a long list of famous wealthy people who aren’t leaving their kids enormous inheritances, including Bill Gates, Warren Buffet, George Lucas, and Jackie Chan.

However, it seems near impossible for some of that celebrity to not rub off on your kids, with Ramsay’s spawn having over 500,000 Instagram followers between them. That’s a free marketing audience many people would dream of. Matilda Ramsay, at only 15, also has her own cooking show, a cook book, and seems to have made an attempt at a YouTube channel. Talk about taking advantage of a great situation. Ramsay doesn’t need to defend shit. His kids are doing alright.