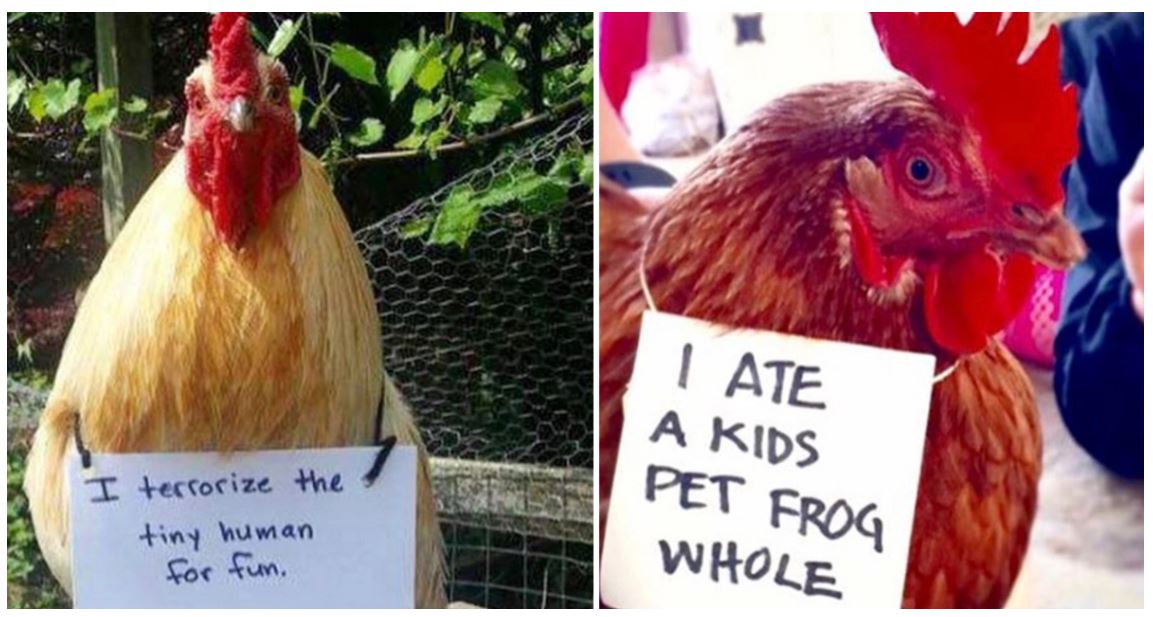 An eggcellent collection of photos from farmers “cock-shaming” their chickens

We’re all familiar with the concept of dog-shaming. It’s usually a pretty amusing way to spend a bit of time looking at guilty dogs and laughing at their shenanigans. But they’re not the only ones who get to have a bit of fun. Check out these cheeky chickens… 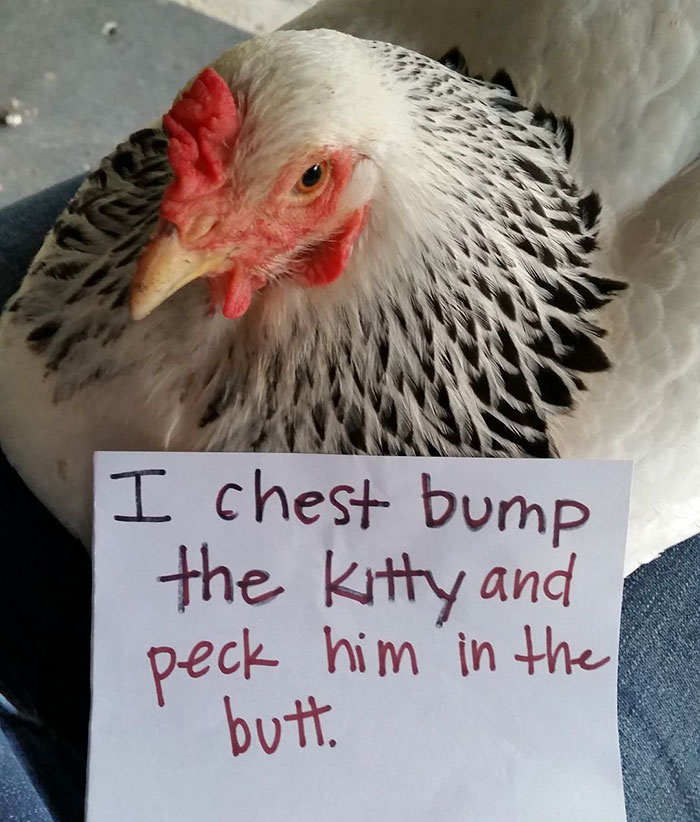 This is a great place to start. Any chicken who shirtfronts the cat like Tony Abbott reckons he’d shirtfront Putin is worth keeping around. What a bloody legend. 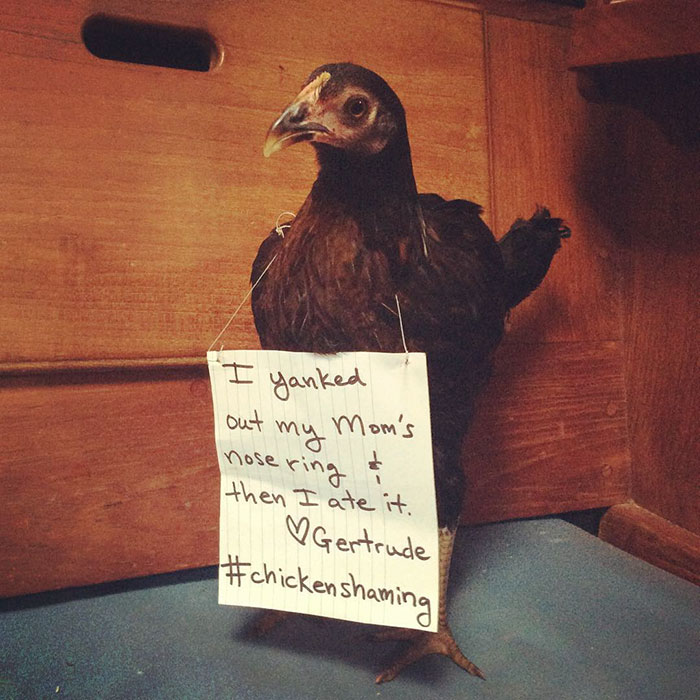 I do have some questions about this. First of all, why is your chicken so close to your face? You do know you’re supposed to cook it before you take a bite, right? Secondly, when it says ‘yanked out my mom’s nose ring’ does that mean there’s a sheila in the house who refers to themselves as the chicken’s mum? Did it draw blood? I dunno, but something is all messed up with this one! I can think of a very quick way to rectify this situation. All it would require is one bottle of Nandos hot sauce, one or two bread rolls and a packet of frozen chips. Pretty soon the house would be down one freeloading slacker. I’m sure of it! 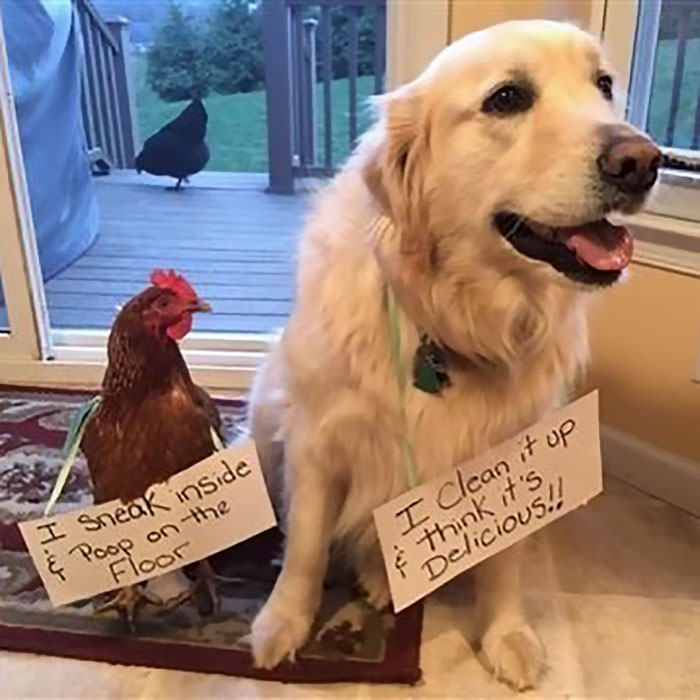 F**K YES!!! Dog-shaming and cock-shaming in one photo. And how’s the teamwork on this pair? It’s like a classic buddy comedy. There’s a pixar movie in it. 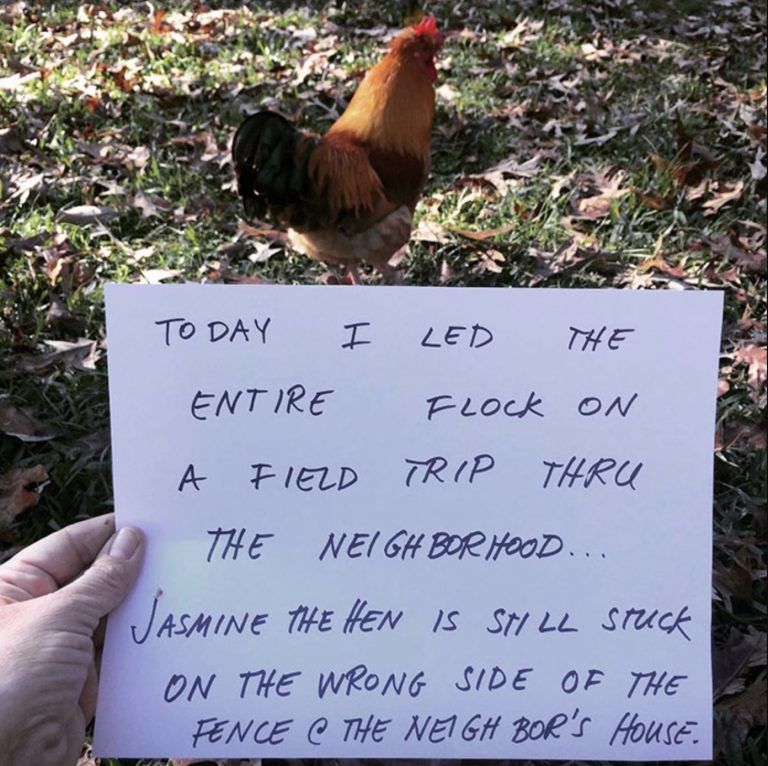 I’m pretty sure they already made a movie or two about this. 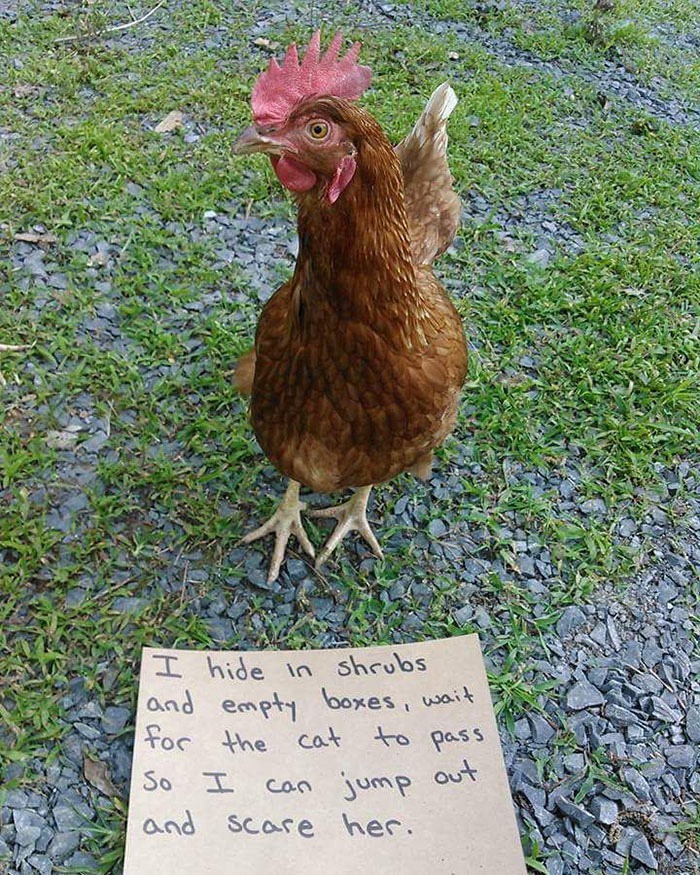 We’re really starting to get a picture at the secret war between cats and chickens. We already know from the sh**-eating dog up ahead that the mutts and the chooks have formed an alliance – and with the cats as their common enemy, who could blame them. I have to say, I’m with the chickens. Cats are pretty shady characters. F**k ’em. 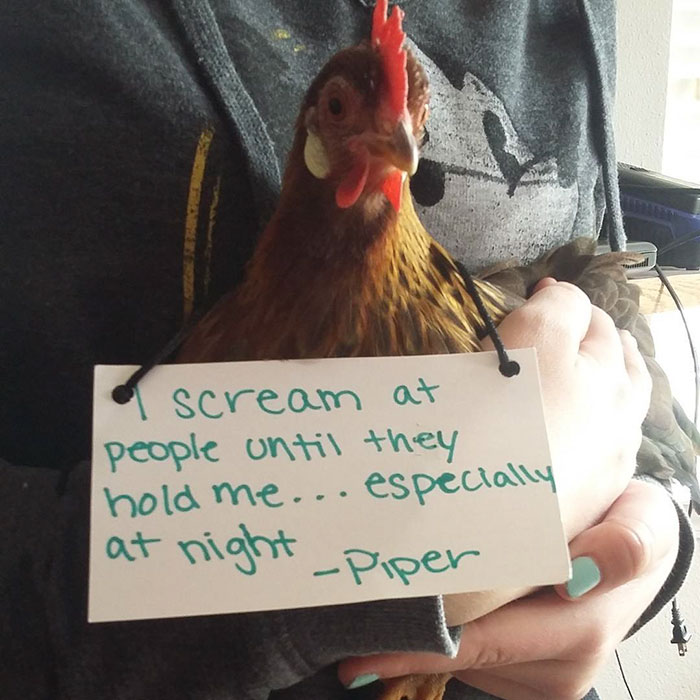 Here’s a chicken with mental issues. Probably something to do with abandonment. She was left alone too long as an egg and developed a really traumatising fear of being boiled. It seems to me that the only way to fix this problem is to cook the chook. I know, it’s probably not nice, but her life is a waking nightmare and chickens do, in fact, taste delicious! 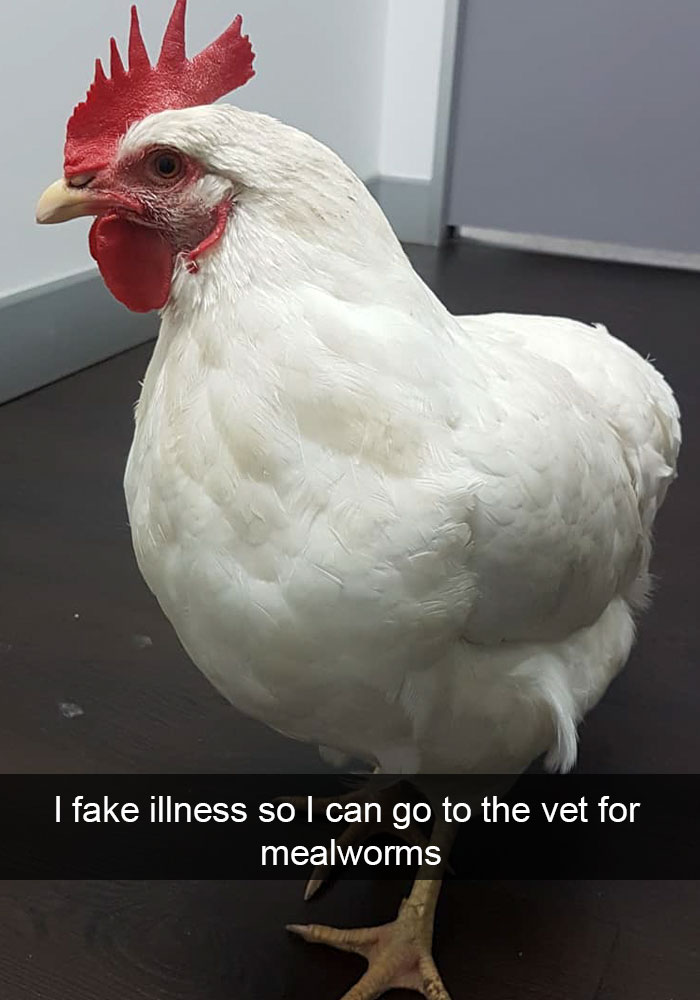 I’m not really sure how a chicken feigns illness. Perhaps it’s been watching too much soccer. 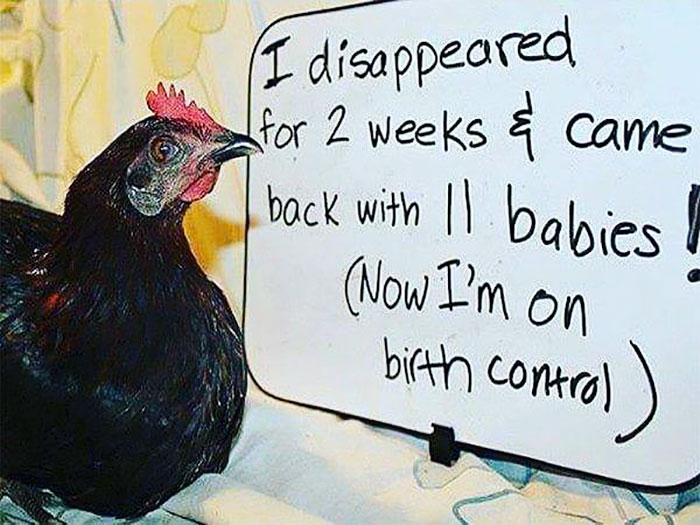 When I first read this I thought the chicken came home and laid eleven eggs. As for birth control for a chicken…I’m not sure how that works exactly. Perhaps you should stop letting your cock near it and it might stop happening. 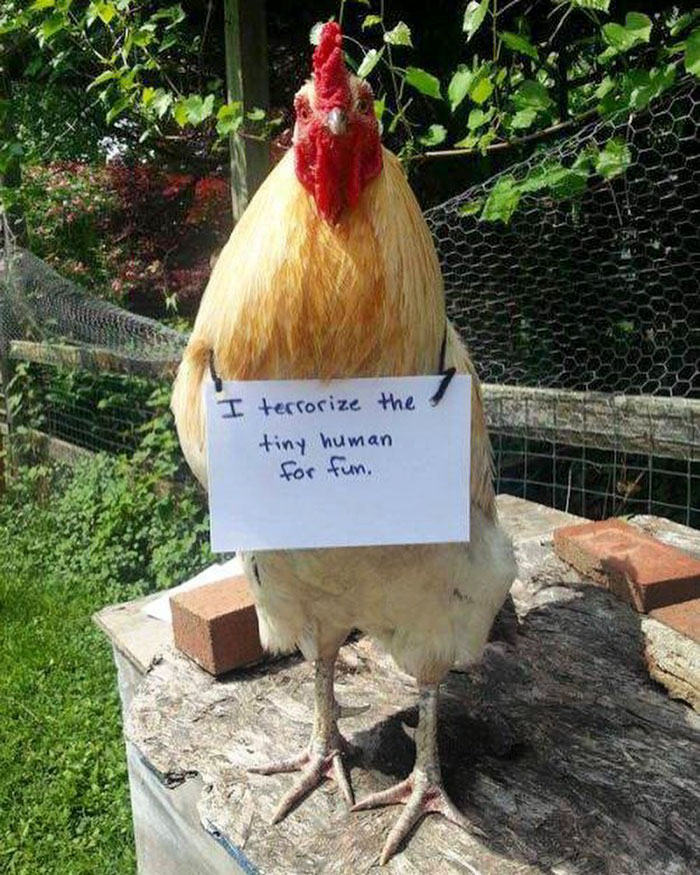 Yeah, roosters are actually b**tards. They will chase children and they do bite. In fact, the only effective way of stopping them is Nandos hot sauce, a couple of bread rolls and a packet of frozen chips…

Until next time, groovers.