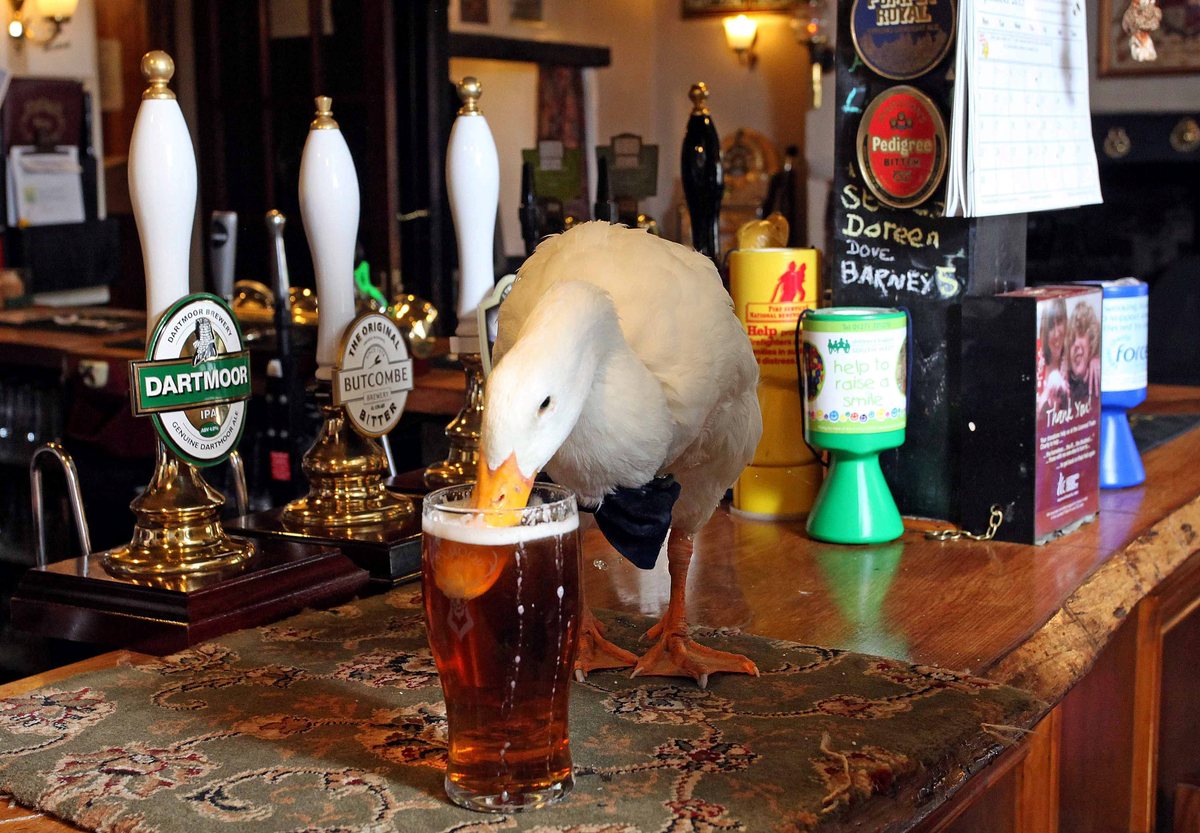 This Duck Is A Regular At The Pub, He Drinks Pints & Picks Fights

Fight fans rejoice! We’ve got a f*****g bewdy for you on tonight’s bill. It’s the heavily anticipated battle of fur vs feathers, it’s Star the bow-tie wearing drunkard duck vs his one-time mate Meggie the dog.

Avid fight fans, casual observers and lucky passers-by are on hand in The Old Courthouse Inn in Devon’s little town of Chulmleigh.

Star is a bit of a fan favourite around here. He’s grown up in the pub, spending time as a little duckling in the pocket of his – and Meggie’s – owner Barrie Hayman.

In that time he’s become something of a well-known lager-lout and he’s notorious for his willingness to throw down at the slightest provocation. 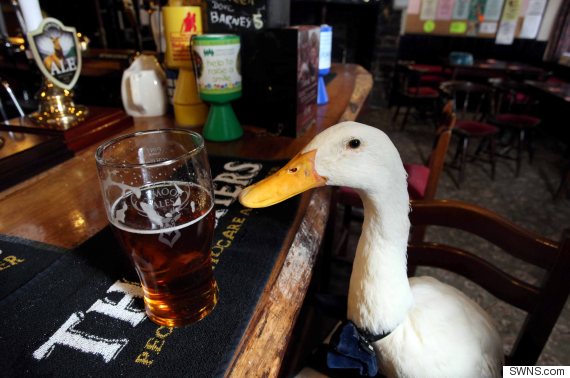 Star wondering whether he could glass Meggie with this particular glass. Credit: SWNS

Of course, this has left Meggie the dog, man’s supposed best friend somewhat on the outer. Like all dog’s she’s known to become jealous. She’s known to think that Star is something of a f***wit.

So when Star steps too close to Meggie’s bone, the dog finally snaps, lets out the inner Cujo, and lets the duck know once and for all who’s on top of the bloody food chain.

It kicks off when Star waddles by Meggie, flaunts her tail-feathers and makes a couple of wisequacks.  Full of liquid courage, Star the duck gives Meggie a cold avian glare and says, ‘f*** you, Meggie.’ 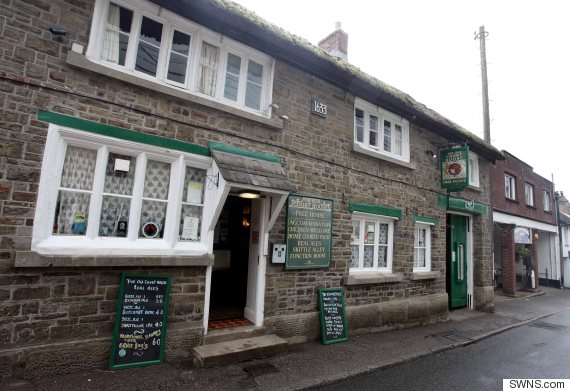 The Old Courthouse Inn in Chulmleigh, North Devon, where the brewhaha went down. Credit: SWNS

And it’s f***ing on. Star’s flaps his wings, jumps on the dog’s back, gives him the old one-two web-foot stomp and says once again, ‘nah yeah, f*** you, Meggie!’

The dog’s having none of that. She loses the f***ing plot, throws Star to the ground, gives her a shake. She intends to bury the duck like a mouldy old bone, splits poor Star’s lower beak clean in half and says, ‘that’ll learn ya, you little wanker.  And by the way, f*** you!’

The fight’s over, there’s pandemonium in the Old Court Inn, some of the spectators rush around frantically, desperate to help the brutalised duck, others wonder if this mean’s tonight’s menu’s just got a new special on the bill.

Fortunately for Star that’s not to be. He’s off to the Vet’s. He’s going under surgery. Thankfully, as Barrie Hayman says, ‘Our Star is a tough cookie.’ The duck’s coming out of it fine. There’s no word from Meggie who’s slinked to the corner to sulk. 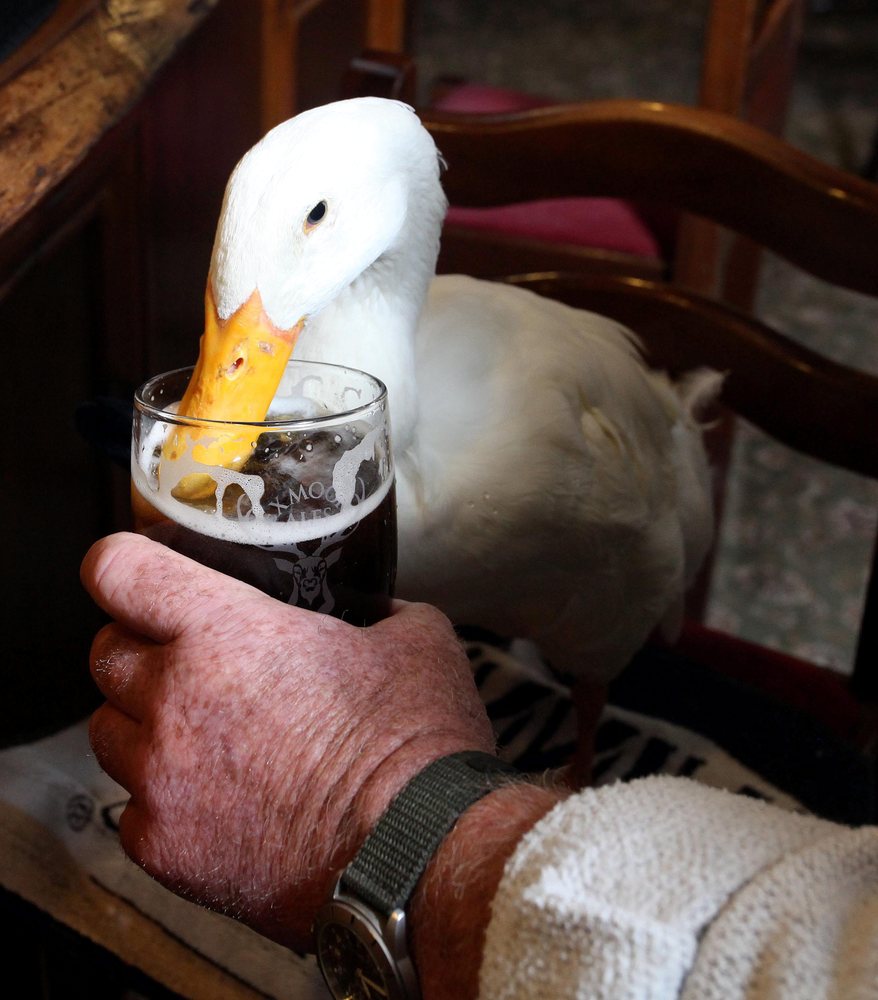 He’ll be back on the beers in no time. Stiff upper lip and all that. Credit: SWNS

He’ll be drinking beer with his mates again in no time.

This what the duck’s Handler had to say about the ‘fight’:

“He gave her a stare, then promptly stood on her back. It was not pretty and not nice. We were so scared we would lose Star.

“He had to be rushed to the vets and go under anaesthetic, which is always risky and could go either way with ducks and other small animals.

What a battle. What an epic. What a tale of fur v feathers. Unfortunately the scrap wasn’t caught on camera, but old mate entering the pub and drinking a beer was! Check it out: