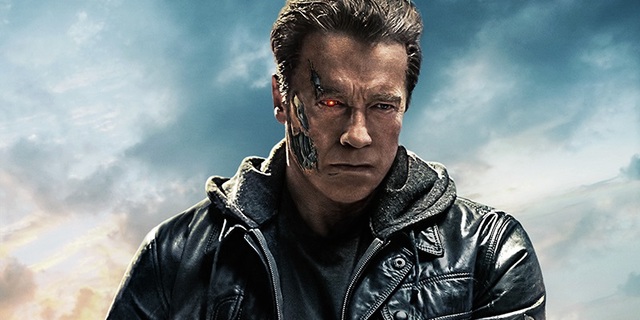 All right, all right, we all know Terminator Genisys was essentially a steaming pile of shit, but if you’re anything like me, you still harbour faint hope the Terminator Movies can once again become as awesome as they were when you were growing up. My hopes have gone the way of his youth… (Credit: NBC)

As a teenager, I just about wore out the VHS tape that Terminator 2 was recorded onto. Every weekend saw that on high rotation with The Crow, Die Hard and a really dodgy movie called Death Promise (check that out here).

Anyway, I’m getting off the bloody track. James Cameron, the man behind the original Terminator Movies still has hope in the franchise – and like most people – he’s smart enough to know it should revolve around Arnie, not just use him as a gimmick or a cameo.

So what’s he gone and done. He’s asked himself an important bloody question. Check this out:

““Yeah, you got to ask yourself, ‘Why did they make these characters look and sound like Arnold?… There has to have been a guy who’s DNA was harvested from – that they grew the organic outer layer that they grew the Terminator from…and that presumably was a real person at some point.”

And it seems, he’s planning on rebooting the franchise with a prequel story revolved around that.

“Now, the question is, did that person have some sort of meaning to Skynet on WHY they chose that one (Arnold)? Or was it like a whole rack of Terminators and the one that happened to be the Arnold model just happened to be closest to the door going out to the time displacement center and all the others looked different? I’ve asked myself these questions but it’s never been resolved…so stay tuned!”

Yeah, nah, I don’t know about you, but to me that seems a bit shit. Let’s face it. Terminator was always at its best when it was a pseudo horror-film. The Terminator was an almost unkillable machine hunting down one human protagonist in the first one. The second one featured that terminator helping a human protagonist against an even scarier terminator. As an added bonus, he said things like, “hasta la vista, dickwad.” Whack some Guns n f***ing Roses over the top of that and you’ve got yourself a movie scene! (Credit: Business Insider)

If Cameron can remember that and bring the movie back to basics instead of all this in the future, war against humanity shit, he might be able to revive it.