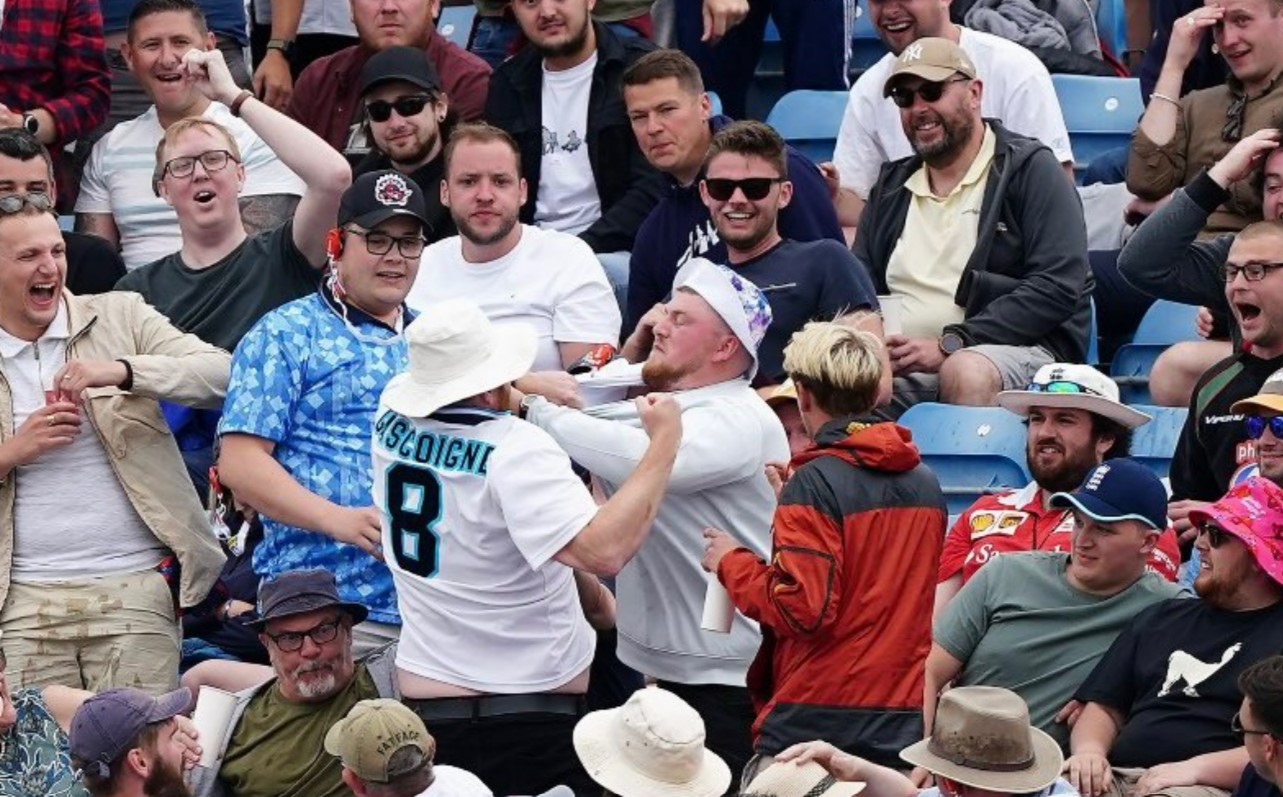 Everyone knows that going to watch the cricket is all about the beers, the costumes, the beers, the fun, and then the cricket. One thing it’s definitely not about is a bloody punch-on. Yeah, nah, some sports are all about bringing back the biff. Cricket, though? Yeah, nah…cricket’s supposed to be a place you can relax. That’s why people are branding scenes at the recent Poms V Kiwis match in Leeds a f**ken disgrace.

All right, for a bit of context, it all kicked off at the third and final test match between England and New Zealand. Before events got a bit spicy in the stands, it was a great day for the Poms. Spinner Jack Leach took ten f**ken wickets and that was just the start.

Violence at the cricket is the Brexit your Dad voted for. pic.twitter.com/EyGAzHwnNZ

Once Ollie Pope and Jack Root hit the pitch, they f**ken clobbered the ball around, taking 81 not out and 55 not out respectively. By the end of the day, they were at 2-183 and only needed 113 more runs to take the series against the current world champs.

Not good behaviour afterwards though…big fight and police having to step in. Whatever happened to just "watching the cricket"…?!

But that’s not why we’re here. Nah, of course not. We’re here about the biff. Deadset, a few of the blokes turned the stands into a battleground when they started brawling. You can watch the events down below, but it’s easy to see why they’ve been branded ‘plonkers’. Others said the fight just ‘wasn’t cricket’.

Just NOT cricket! Brawl breaks out in crowd at third and final test between England and New … https://t.co/O2RXBb6ZrM via @MailOnline

We’re not sure how it started, but giving it a squiz, it seems like a fair bit of handbags. You’ve got the bloke in the Gascoigne shirt, you’ve got another fella, and you’ve got a whole bunch of people who look like they’re enjoying the chaos.

Headingley test match, beer snakes, tuneless singing to a pillock with a trumpet, mass brawl on Western Terrace.
Safely tucked away top tier of new stand. I know I'm a grumpy sod but what a bunch of arseholes!
Note to Barmy Army. Don't care whoooo you are or where you come from.

So, really, it begs the question of whether or not it was actually that bad. We’d be interested to know your thoughts.

Final thought: Obviously, we’ll agree with the sentiment that anyone starting a biff in a public place is a bit of a plonker, but it’s not like the cricket isn’t known for a bit of shenanigans in the stands. Why don’t you share your favourite stories from watching the cricket in the comments section to give us all a better perspective. See you there!

Gazza getting rowdy at headingley pic.twitter.com/ClxT7zkTRn

We’ve gotta be honest, we bloody love a story like this one. Yeah, nah, at first glance it seems so simple, but when you burrow down into it, you can see there’s a legitimate f**ktonne of issues to unpack. There’s the...