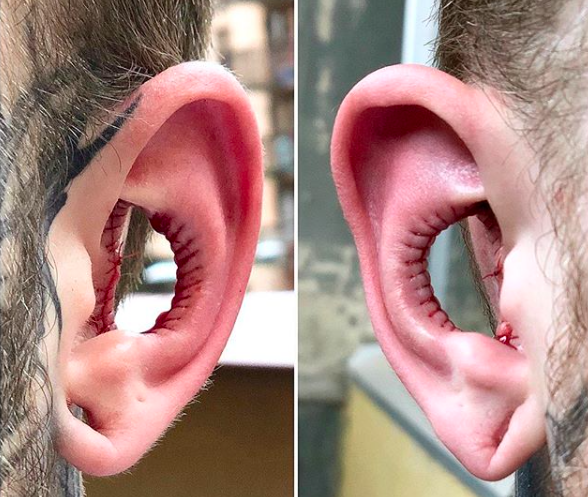 People are taking body piercing up a notch in 2019

Remember when gettin’ ya nosed pierced was a big f**ken deal? Ya parents would be spewing, convinced it meant you’d end up running a prison gang in Silverwater… And ya boss at your weekend KFC job would be like, you’re not workin’ the drive thru with that ring in ya snoz!

I reckon the parents of this bloke, would be dreamin’ their biggest problem was a bloody nose ring.

Charlie from Melbourne, @charlesvbentley flew all the way to Sweden to have half his bloody ears cut out in the name of body modification.

Can ya imagine the repercussions if someone grabbed a hold of his ear in brawl? Jesus.

The bloke that performed the procedure said in his caption:

To get some facts straight note that this procedure doesn’t make you deaf. It might impair your ability to hear the direction of sound for the first week or two until your mind has adjusted to your new ears. Hearing from behind will in fact improve. Our ears doesn’t “catch” sound as it did eons of years ago when our ears were bigger hence why we have to create a bigger “ear” by cupping our hand around our ear to hear better.

I’m not the most educated person round here, but I find it hard to believe that havin’ a gaping f**ken hole in your ear won’t effect ya bloody hearing… Some Insta commenters were thinkin’ the same thing.

F**kin expert over here.. guys a doctor, archaeologist and an anthrpologist. But settled on being a body-mod dude.. Jeeez.. Whats ur long term study results on ur ‘patients’ professor?

As a person who was born deaf without ear drums and ear canals and had to have 15+ surgeries since I was 2.5 years old, this is the dumbest and most misleading information ever posted on the internet. The only way to truly amplify your hearing from behind your ear, which is called BONE CONDUCTION, is through SURGERY, by implanting a screw that is literally drilled into your bone and then attaching a hearing device through it. How stupid are people?!

This is how you go deaf. Yes, the conch is there for a reason. I love body mods, but this ain’t it, chief.

Turns out that slicin’ and dicin’ a dudes wing nuts is not the only thing you can have done at Calm Body Modifications, they do all kind of piercings, ear gauges and dermal implants.

But seems the real speciality of this joint is the tongue splitting procedure.

Most of us Ozzy’s are avoiding anything with a forked tongue outta fear of f**ken death, these blokes are embracing the snake life. Yeah, nah. F**k that.

Final Thought: This kinda extreme body modification is not for me, I mean, I got a couple tramp stamps and wanted to be like Britney in the 90’s with me navel pierced and all that s**t. But bloody hell, this is full on. I think I gotta draw the line when “modification” starts to f**k with the how the body part functions naturally. In sayin’ that, ya know, each to their own. If I ever visit Sweden i’ll be stickin’ to the Finnish vodka, and those grouse meatballs.

By Chuck Steinway 44 mins ago