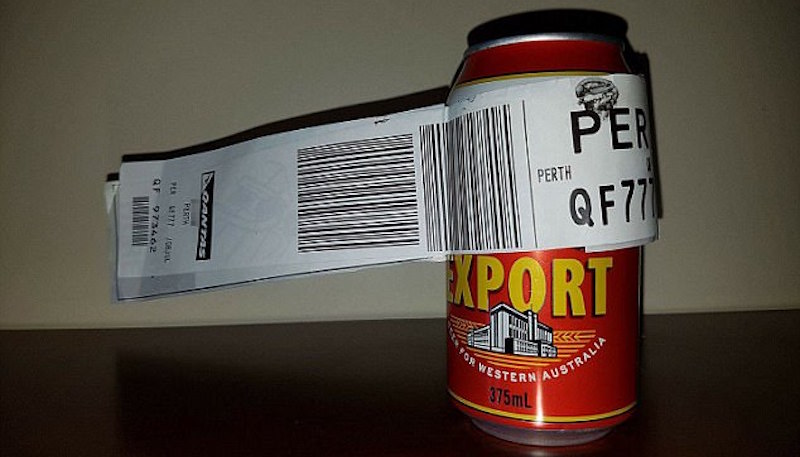 Beer: it’s the best fu*king drink in the world and while all beers are delicious (yes, even you, Fosters) every beer drinker has their favourite brand.

What lengths would you go to in order to enjoy your preferred drop though? I’m willing to bet it’s not as far as this Melbourne man who recently handed over one solitary can of Emu Export as his sole check in luggage for a flight to Perth.

Ground staff in Melbourne airport had a good ole chuckle as the solitary tinny made its way along the conveyor belt and they were quick to take photos of the unusual check-in item.

But being the consummate professionals that they are, the staff did, however, load the lone can onto the plane and to the passenger’s surprise, his beer arrived at baggage reclaim ahead of all the other luggage on the flight. Look at the little fella go…

The passenger, who asked to remain anonymous, told Daily Mail Australia that he was doubtful as to whether his precious cargo would arrive at all after he and a friend came up with the idea.

“My mate works at the airport and we hatched the plan as a laugh,” the Emu Export fan said. “I half didn’t expect it to come out the other end but when it did it was sent out well in front of all the other luggage, so the baggage handlers obviously appreciated it.” Airport employees sent the pics to Peter Ellis of travel site FlightMood who told the Daily Mail Australia that check-ins involving Emu Export were actually a quite common occurrence.

“Export being checked in as baggage is not an uncommon site so I wasn’t even surprised,” he said. “I’ve seen Export being flown as far as Greece – now that’s dedication!” A case of the stuff, heading to Tasmania