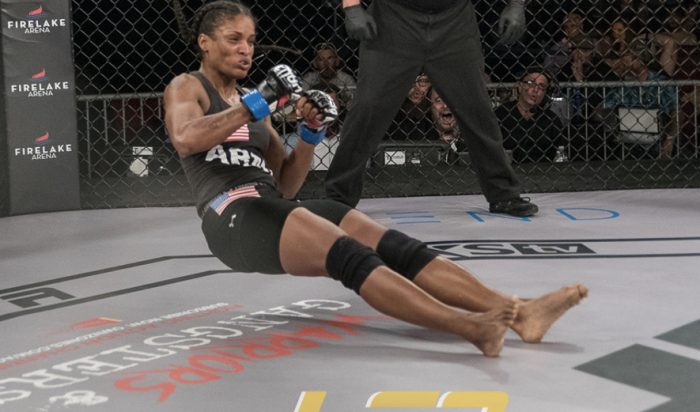 Legacy Fighting Alliance is mixed martial arts promotion fast getting a name for themselves, partnering up with AXS TV Fights means we get to see more KOs in 1080p clarity all over the globe.

In fact, Sabina Mazo scored a ridiculous knockout of Jamie Thorton late in the first round of their bout at the Firelake Casino, one that will surely be in consideration for KO of the Year for 2017.

On the video below, you’ll see Mazo land a perfectly timed head kick that stiffens Thorton, and sends her straight back to end the bout.

Thorton suffered what is called a “fencing response” in response to the kick. According to Wikipedia the fencing response is a peculiar position of the arms following a concussion. Immediately after moderate forces have been applied to the brainstem, the forearms are held flexed or extended (typically into the air) for a period lasting up to several seconds after the impact

There is always immediate sense of worry after a KO such as this, but reports have emerged that Thorton walked from the arena on his her volition.

WATCH THE KO OF THE YEAR CONTENDER ON THE PLAYER BELOW

By Leigh Roberts On