When it comes to culinary delights, we know there are more than a fair few of you out there in the comments section who love a bit of sausage. Deadset, from what we hear some of you aren’t picky at all. Kabana, knackwurst, bratwurst, chipolatas, chorizo and even kielbasa; whatever you’re served up, you’ll f**ken smash it. Still, if there’s one kind of sausage most people don’t want to see when they’re making their dinner, it’s a bloody meat snorkel. Still, it turns out that a set of chopping boards from Amazon are serving up the pantswurst. Check it out…

Yeah, nah, don’t get us wrong, we’re not trying to be crude, but we’ve gotta report the news. If that news happens to contain a healthy dose of cock, what are we to do? So, with that out of the way, let’s get to the meat of this story.

my friend ordered these cutting boards and this is what she got💀 pic.twitter.com/tHHCVIkvJL

According to some sheila on Twitter, @tbcstan, her mate ordered some chopping boards from Amazon. And, to be fair, it’d be a pretty mundane and s**t story if it wasn’t for the giant schlong.

I just ordered this per your suggestion 😂 pic.twitter.com/Tym3ap6TcJ

Yeah, nah, the boards were advertised as having a ‘marble finish’ but at no point did anyone suggest that would entail a big ol’ sex-salami plastered on her chopping board. Still, that’s exactly what was delivered. 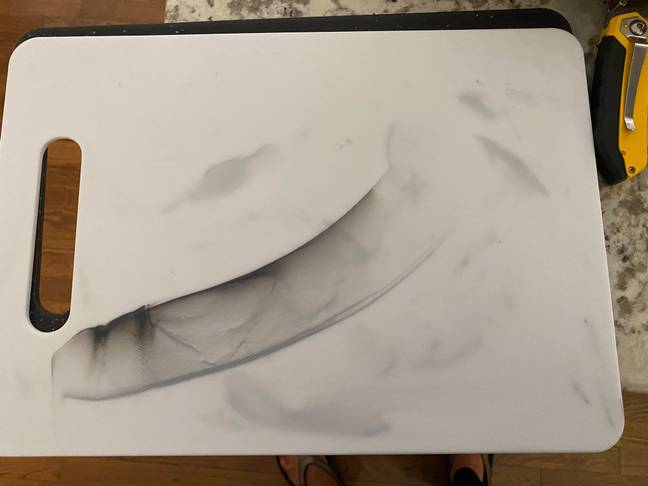 Not everyone thought it was a bad thing, though. Yeah, nah, as you know, there are some real sausage-fiends out there, and another Twitter user decided she needed to snap one of these bad boys up.

Gotta be honest – very disappointed 😂 I see some shaft and sack but not a lot of vein detail pic.twitter.com/yH1IbgPwLr

Unfortunately for her, though, her board didn’t come with the full package. Yeah, nah, she definitely got shafted.

Final thought: There’s really not too much we can say about this, except that someone out there in the chopping board factory is having a bloody good laugh about it. After all, it’s not like whoever packed it wouldn’t have known what it was. Anyway, go to the comments section and tag someone you reckon would love a bit of dick with their dinner. It’s the mature thing to do.