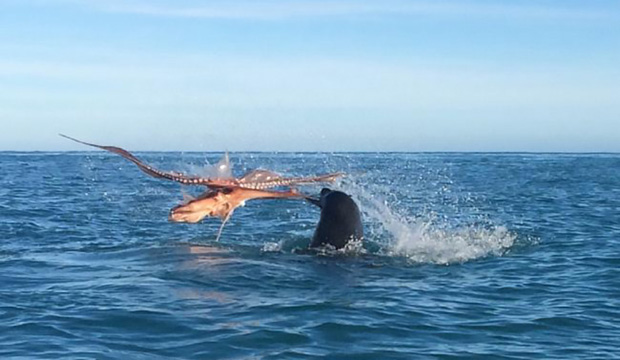 WATCH: Octopus vs Seal Fight To The Death

Plus 1 for the mammals! I’ve always wondered why calamari was so expensive, and now I know why. It’s because these annoying sea puppers keep eating them before we can catch them.

This footage from comes out of Kaikoura, New Zealand, from a kayaker who spotted a large flock of birds gathered around like kids at an after-school fight. On closer inspection, the kayakers found a seal and octopus embroiled in a fight. This was no Pokémon battle, but a fight to the death.

Connor Stapley captured the footage from his iPhone, saying it was quite rare to see a seal feeding at that time of day, as they normally feed during the evening. “It went on for about 20 minutes,” stated Stapley “it was definitely one of the biggest octopuses I have ever seen.” The thrashing motion of the seal is intended to rip the legs off the octopus for consumption, according to Stapley, “they have to rip the tentacles off before they eat them, otherwise they stick to their throat and they have to throw it up again. They are literally dismembered.” One of the legs can be seen being torn free in the footage. Ouch. New Zealand Fur seals can eat up to 7 kg of octopus a day, according to Stapley, who operates in Kaikoura as a kayaking guide for Kaikoura Kayaks. “We always promise kayakers they will see seals, but every day is different. Everyone was interested and no one got hit by any flying bits of octopus.” Stapley believes that the seal most probably would’ve dragged the octopus up from the bottom of the sea floor before ripping into it. Seems us humans aren’t the only ones who can’t enjoy a feed of seafood without freeloading seagulls looking for a share of the meal.