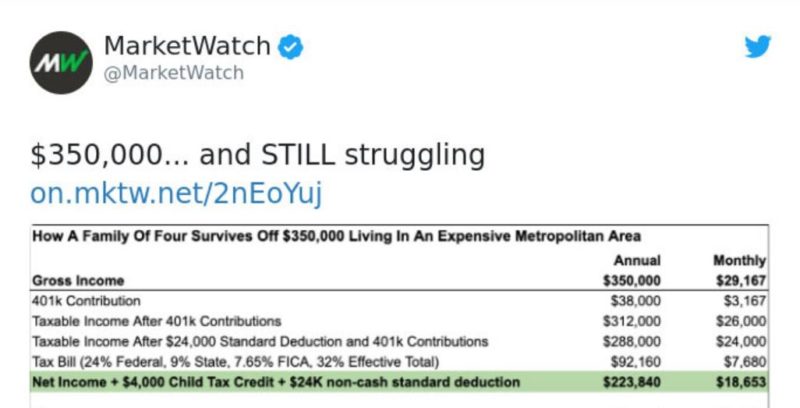 Finances are a pretty funny thing. Obviously, in plenty of places, it’s a bit of a social no-no to talk about exactly how much money is flowing through your household, but understanding those figures can also lead to some pretty important insights about the way people live. By the same token, people of different backgrounds look at financial figures in completely different ways. So when someone who might not think $350k per year is much tries to explain the struggle, the rest of the world has some interesting things to say…

This one all started when MarketWatch, a website that provides stock market, financial and business news took some data collected by Sam Dogen on his Financial Samurai blog and presented it as proof that families on $350k per year we’re struggling to make ends meet. 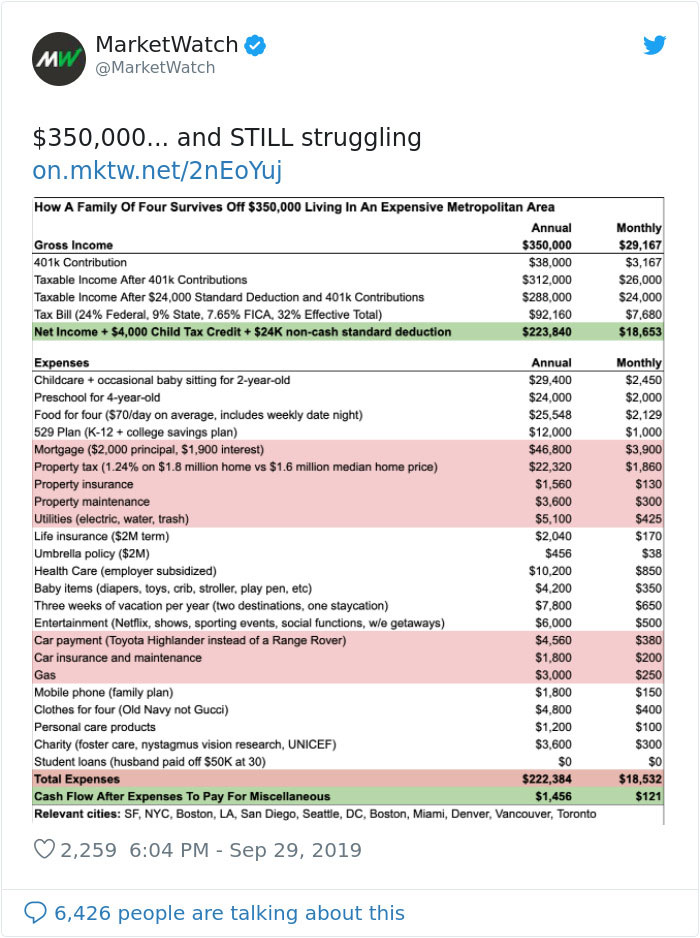 The problem with their data is that it wasn’t exactly indicative of frugality. Yeah, nah, even some of the admittedly tongue-in-cheek comments showed that the hypothetical family’s financial decisions were only laughably economic at best.

And that’s half the reason that Twitter-users – led by Alexandria Ocasio-Cortez – went to town on the post. “Struggling with what?” she asks. “Math?” Another user was quick to point out, “If you’re spending $70 per day on food, taking two destination vacations per year, saving for retirement and college, $500 per month on “entertainment” and 100 per month per child on clothing, you’re not struggling at all. Not even a little.” 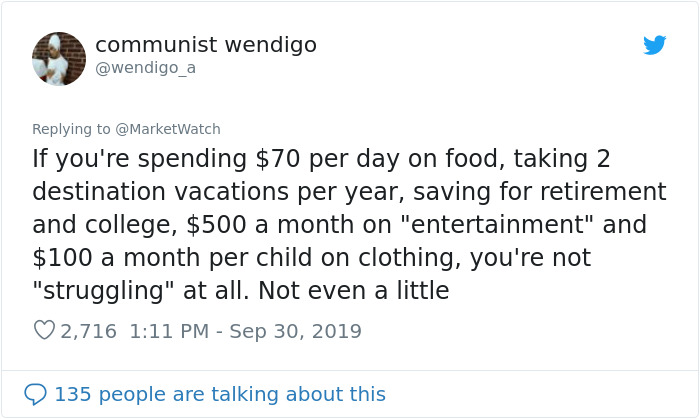 And it’s pretty hard to disagree with those comments. Anyone who knows the struggle will understand pretty quickly that stretching a few measly bucks into a family meal, wearing their sibling’s hand-me-down clothes and walking to school because the bus is expensive will know that’s where the real struggle is. Naturally, they’ll look at this as a big joke.

For what it’s worth, though, Dogen, who wrote the original article for his Financial Samurai website, reckons, “Based on my original article on CNBC, which MarketWatch riffed off, I really tried to be thorough and analyze all the costs and see where this household could save and could not save. I didn’t say this hypothetical couple was “struggling,” MarketWatch did.”

He continued by adding, “I think the reactions by readers on Twitter are very eye-opening and fair. I tried to make the budget a little humorous and poke fun at U.S. consumerism with lines such as “Toyota Highlander instead of a Range Rover” and “Old Navy instead of Gucci.” Final thought: Once again, it’s one of those things that really highlights just how privilege can change how you see the world. We reckon this is the kind of thing that everyone should have a look at, but it’d be interesting to see just how a real low-income family’s budget would look in comparison. Then we’d see what ‘the struggle’ really looks like.