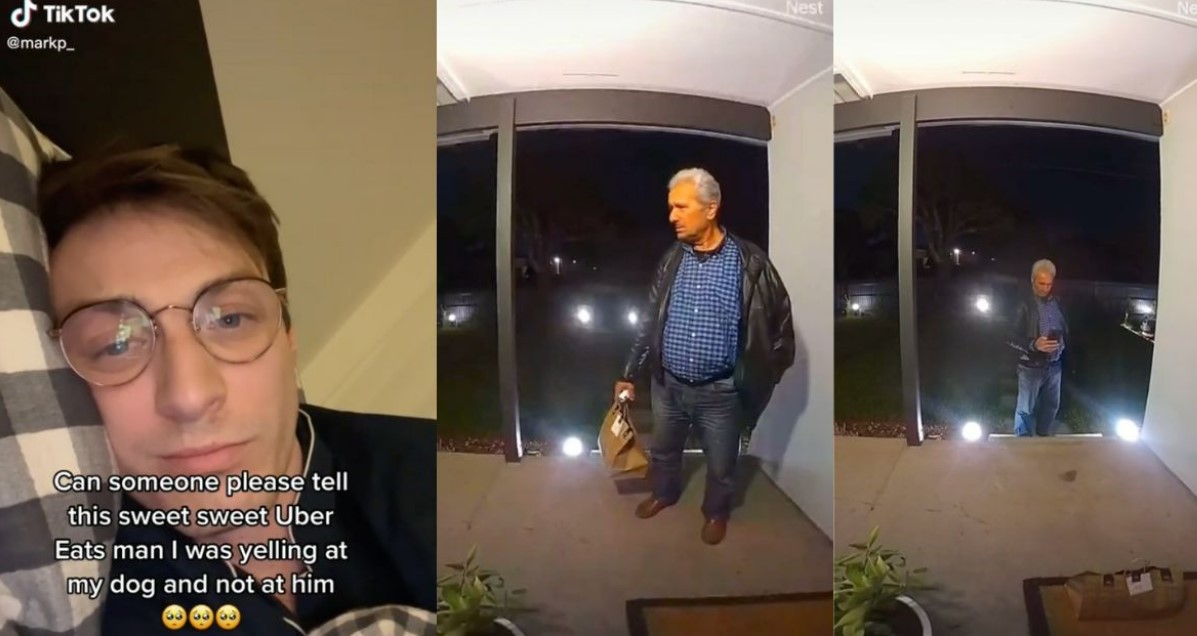 Life’s full of tricky moments and misunderstandings. Yeah, nah, it really is. Just ask Mark Polchleb what we mean. This poor f**ker was yelling at his dog when a DoorDash delivery driver turned up with his grub. Unfortunately, this yelling was misunderstood. Fortunately, however, Mark’s a reflective guy. Check out the story below…

All right, while we’ve given you the gist of things, we’ve gotta elaborate a bit. As you can see in the video below, Mark’s delivery driver – whose name is Sami – was delivering the meal like a true f**ken pro, even with Mark’s dog cutting sick at him.

After a few moments, Mark, decided to give his dog a spray: “Get away from the door, mate!” he yelled. Poor bloody Sami, though, he thought he was in the s**t.

We won’t unpack all the confusion, but you can see it unfold. Mark, being a reflective f**ker watched this s**t back and realized he needed to make it up to Sami. He shared the footage to TikTok, hoping it could get him in touch with the driver. He even wrote, “I’m genuinely losing sleep over this.”

Loving the story, commenters on the video, gave mark the idea of trying to find Sami using the app. He gave it a shot and posted a few updates. Eventually, though, Mark got a stroke of luck. Sami’s daughter was scrolling through TikTok when she saw the video!

Like a f**ken legend, she reached out, and Mark and Sami were able to meet up, allowing Mark to apologise and explain how s**t went down. You can watch that video below too.

Deadset, this is the heartwarming content we love. F**ken get in! These top bloke and sheila trophies go to everyone involved!

Final thought: Mate, we love s**t like this and that’s got us thinking we should all pay it forward. If there’s someone out there you might have wronged and you reckon you owe ‘em an apology, f**ken reach out in the comments section and let ‘em know! Cheers, ya legends!

Just in case you missed it, here’s one of Ozzy’s latest commentary videos…When animals fight back Part 10