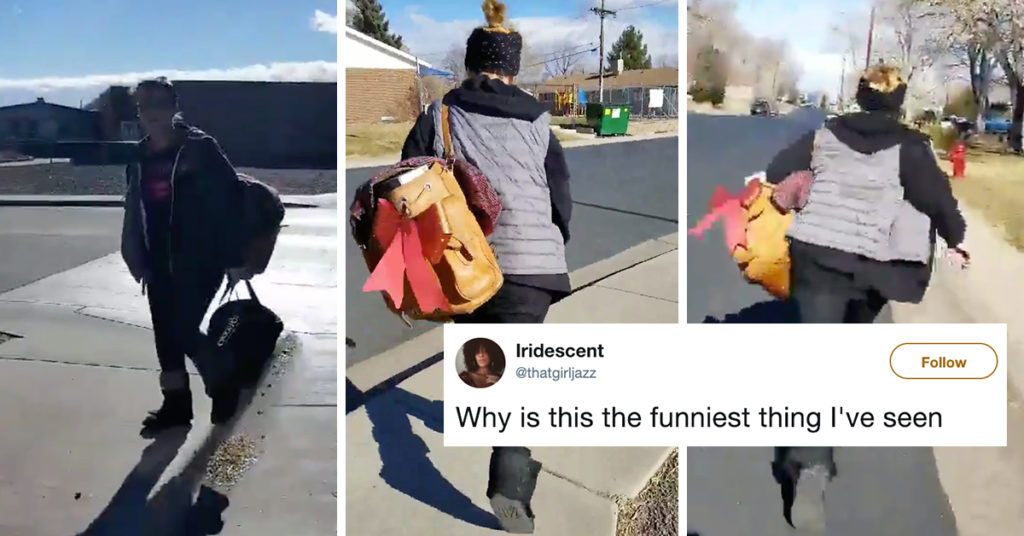 If there’s one thing that you should always remember, it’s that you don’t f**k with Mum. Whether it’s your mum, your mate’s mum or someone else’s mum entirely, they are not to be messed with. They brought life into this world and they’ll happily take some out of it. The karmic balance gives them that right. Every mum gets one free murder for every kid they’ve birthed; it’s like a rule or something. Watch this video to see a thief run afoul of a pissed-off mum.

Yeah, look, mums are arbiters of good behaviour here on planet earth. It’s part of their job to let you know you f**ked up and to ensure you don’t get away with your bullshit. So when the mum who filmed this video spies a chick stealing from her front porch, she gives chase – and lets the chick know.

Yeah, look, stealing’s pretty f**ked. Stealing from everyday working-class people is probably up there in top five worst things you can do. Fortunately, this mum is not gonna tolerate it. On top of the fact she tracks this chick down like a f**ken terminator, she also delivers some quality lines of sass.

The video starts off with the mum saying, “a girl stole a package off my front porch and I’m gonna corner her.” Inevitably, she confronts the girl.

The girl, for her part, tries to ignore her, but her efforts are doomed to fail. When she realises this, she f**ken legs it. Unfortunately for her, running is not her strong point. As she tires herself out in what must be the slowest chase scene ever filmed, she’s forced to endure a barrage of barbed comments from Mum.

“I’ve got you on camera, bitch! Give me the f**king thing,” and, “You’re on tape and you’re in trouble! Now, give it to me!” are practically works of art, but the next exchange is pure gold. “Why are you stealing stuff?”

There’s plenty more, but you can watch the video to see it. We’ll leave you with Mum’s final words, though. “You f**ked with the wrong person, bitch. What’s wrong with you? Asshole!”

Final thought: Mums. You’ve gotta love ‘em. The only way this could have been better is if she asked the girl for her own matron’s number and called her up to report the bad behaviour. It’s gotta be said, though, that this mum’s take-no-sh*t attitude is f**ken brilliant. Good stuff, Mum. This Top Sheila award is all yours. We’re pretty sure you won’t let anyone take it from you!