Gymnast has a bloody brutal fall straight into Destination F#@*ed

Look, it’s no secret we bloody love some of that awesome flippy-spinny s**t gymnasts all over the world do. The way they bounce around the mat like f**ken frogs or fleas or even bloody rabbits is pretty impressive stuff and we reckon it takes hard work, guts and a bit of luck to make yourself look like a human tiddlywink as you hurtle through the air. On a completely unrelated note, we also love Destination F**ked… when someone deserving visits it. We’re not really fans when an unwarranted trip to the land of DF is made, but them’s the breaks. Sometimes you just can’t help the news.

So, yeah, you may have seen this already, but a pretty bloody unfortunate gymnast by the name of Samantha Cerio has just visited Destination F**ked in brutal fashion. We’ve gotta be straight up with this one. It’s not pleasant and we wish it had have happened to some dips**t and not a hardworking young sheila with her life ahead of her. 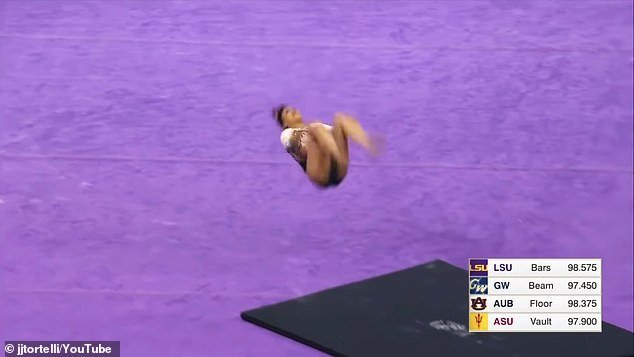 Before we get to today’s story, here’s what she usually does:

Anyway, Cerio f**ken powers up and activates her magic gymnast powers, before launching into her routine. She gets a bit of a run-up – and that’s all part of the suspense – before she takes off. We’re not sure how many flips there actually are in that handspring double front, but it’s safe to say there are f**ken heaps!

Here’s where it gets ugly, though. We presume that she meant to land, do a booty-bounce and a spready-slam, and then do some twirly s**t, but it wasn’t to be. Nah. Yeah, nah, she really f**ked the landing. The footage is not even a little bit pleasant. If someone tells you it is, they’re lying. They’re lying through their teeth.

Shortly after the event, Cerio announced it was the last time she’d ever perform gymnastics. She’s got some recovering to do. She dislocated both her knees and broke both her legs in the incident. She later took to Instagram and posted the following:

“After 18 years I am hanging up my grips and leaving the chalk behind. I couldn’t be prouder of the person that gymnastics has made me to become. It’s taught me hard work, humility, integrity, and dedication, just to name a few. It’s given me challenges and road blocks that I would have never imagined that has tested who I am as a person. It may not have ended the way I had planned, but nothing ever goes as planned.”

Final thought: This is not nice. Samantha seems like a lovely young sheila. She’s got her life all figured out. She’s graduating with a degree in aeronautical engineering and she’s about to get married. One f**ked landing won’t send this lass to Destination F**ked. What a top sheila!