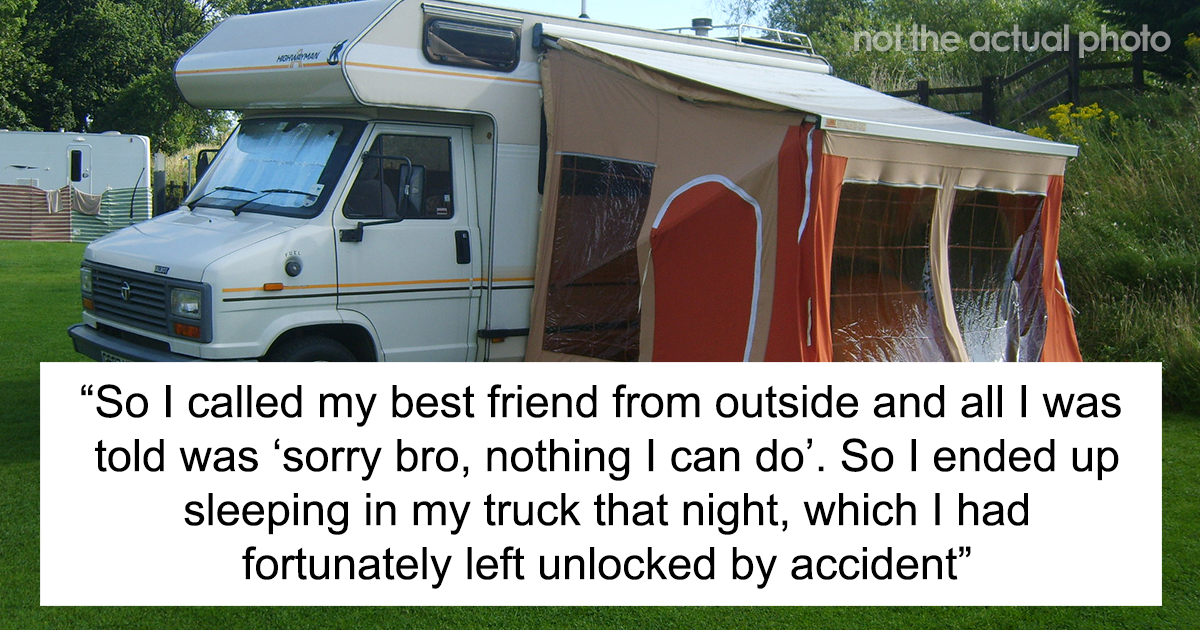 Am I The Asshole posts are some of the best on the internet. Yeah, nah, fair dinkum, they’re usually pretty entertaining, and they’ve got the one thing that makes any good story worth telling – a little bit of internal conflict. It’s true! That’s why we love ‘em. The person telling the story is usually a little bit torn up inside about their actions and they’re seeking validation. It doesn’t always come, but sometimes, when it does, the story they spin has you really loving them. Like this one. Check it out…

OK, for this one, we’re heading on a camping trip with a bloke who uses the Reddit handle of u/cameronjames222. His story is one of betrayal and revenge, and we dunno about you, but we reckon he handled things pretty f**ken well.

So for background, my best friend has gotten into going to these Spartan races. He and a small group of his friends have started going to local ones but recently heard about one in another state they wanted to go to and compete in, but they didn’t have anywhere to stay. So they asked me if they could borrow my truck and trailer (I have a tow behind camper) for the weekend. I said no, I wasn’t comfortable with them taking my truck and trailer but that I’d drive them and the camper to their event. We made the three hour trip and set everything up in the area where the race was taking place the next day.

As you can see, his ‘best mate’ hit him up for a lend of his camper trailer so he could attend a Spartan race with a different friend circle. Uncomfortable with fully lending it out, he offered to drive them there. And, you know what, that already makes him a top f**ken bloke.

I have a habit of leaving my keys on a hook next to the door to my bedroom in my camper. Remember this. Come nightfall, I went to take a phone call outside and ended up wandering around the grounds for over an hour. When I got back to the camper, the door was locked, and I was told by my best friend’s older friend through the window that there wasn’t enough room for me in MY trailer. So I reached for my keys to unlock the door, but realized I had left them inside the camper on the hook in my room. So I called my best friend from outside and all I was told was “sorry bro, nothing I can do”. So I ended up sleeping in my truck that night, which I had fortunately left unlocked by accident.

What happens next, though, is totally uncalled for. The cheeky f**kers locked him out of his own camper trailer – and if he hadn’t accidentally left the truck unlocked, they’d have left him to freeze outside. So, yeah, fair dinkum dick move on their part.

Their race began at 8 am, and at 7, they came meandering out of the trailer and woke me up. No apology, by the way. So while they were in their race, I hooked my truck back up to the trailer, closed and locked everything, and waited until just after they finished and had started walking back to the trailer (think really wide open field). When I saw them coming, I started the truck and drove off the property. With them chasing behind. I made the three hour trip back home declining call after call. When I finally got home, I finally took my best friend’s call. He started yelling at me saying “why would you do this? We have no way home now”. I just said sorry, you shouldn’t have made me sleep in my truck after I did you this solid.

And then comes the revenge. The next day, after these lads had taken part in their Spartan race, he waited for them to get close to the trailer before leaving them behind and driving home without them. 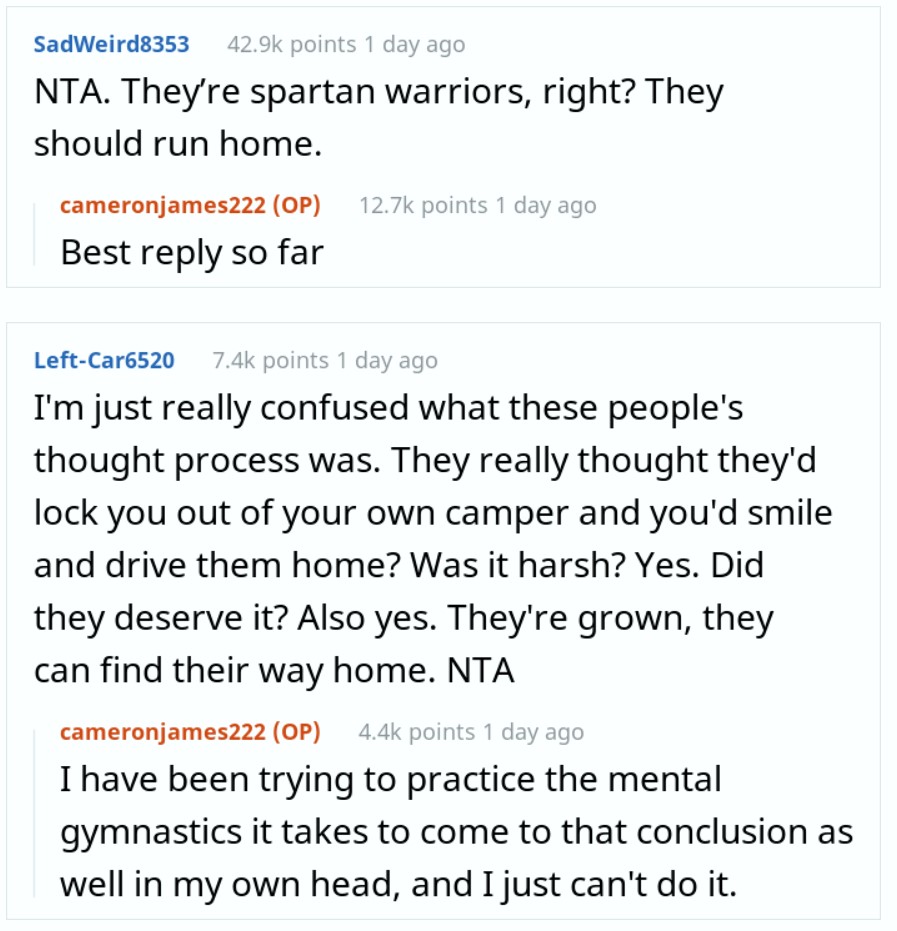 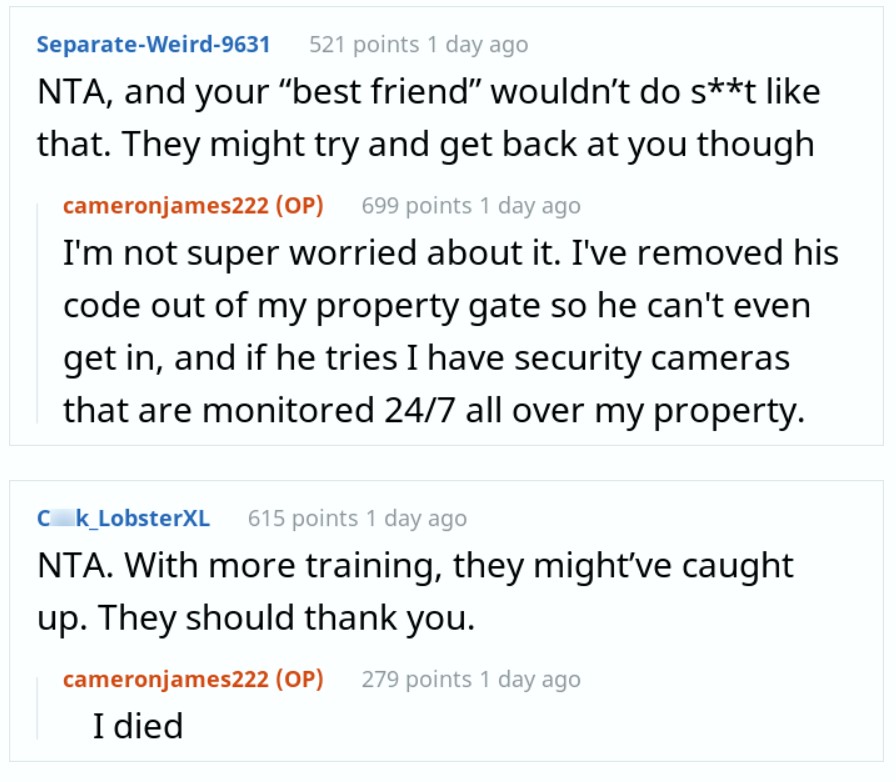 He told me that there were better ways to handle this than by leaving them in an unfamiliar city with no way home. I think he ended up calling his dad to come and get them. Is he right? Was there a better way to handle this? I felt justified until he said that. I am kinda doubting my decision now. Am I the asshole?

Final thought: Yeah, nah, it’s cold-blooded, but it’s f**ken fair and it was fully deserved. Most of the AITA forum seems to agree that the Spartan lads bloody deserved it. What do you reckon? Is he still a top bloke, or was this a bit of sour grapes he shouldn’t have followed through with? Let us know.