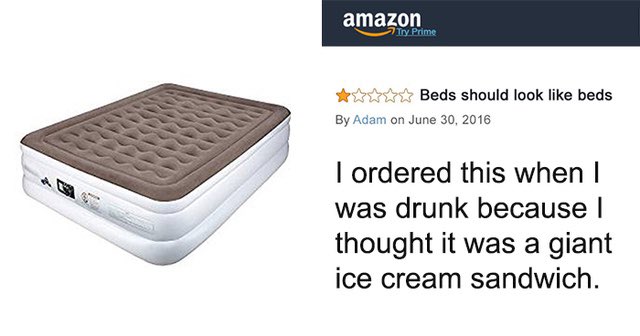 We’re often singing the internet’s praises, but if you’re a regular here, you’ll know that. Still, we just can’t help ourselves. Whenever we think we’ve just about covered it, some other f**ker comes along and shows us something awesome. This time, it’s a Twitter account called Weird Online Reviews, and it’s f**ken mintox. Building on the simple premise of collating weird online reviews in one easy-to-find place, it delivers the goods with style!

Yeah, look, as you know, bloody reviews are one of the internet’s most interesting things. They’ve simultaneously turned everyone into an expert – whether or not they have any knowledge whatsoever – but they’ve also created this bizarre open forum for people to deliver unexpected comedy.

Deadset, it’s a pretty frequent occurrence to come across an odd review online, but they still have that kinda novel vibe, especially when you come across one that may or may not be serious.

Part of this is probably because the world’s full of different opinions. Some people have solid opinions, some have s**t ones, and some people don’t even have opinions, they just want to talk s**t or weird people out.

That’s where a lot of these come in. Some of them come with photos, some are just f**ken funny. No matter the reason for them, though, there’s something here for you to enjoy.

To give you a prime example, the account’s pinned tweet is a simple one-star review of a mattress someone ordered because they thought it looked like an ice-cream sandwich. The headlined their review with, “Beds should look like beds,” and commented that, “I ordered this when I was drunk because I thought it was a giant ice-cream sandwich.”

And that’s either genius or insanity. We’re not sure which.

Final thought: Yeah, for a site called Ozzy Man Reviews, we like to think we know a thing or two about this stuff. Still, let us know how we’re doing. Use the comments section to review us! Go for it!