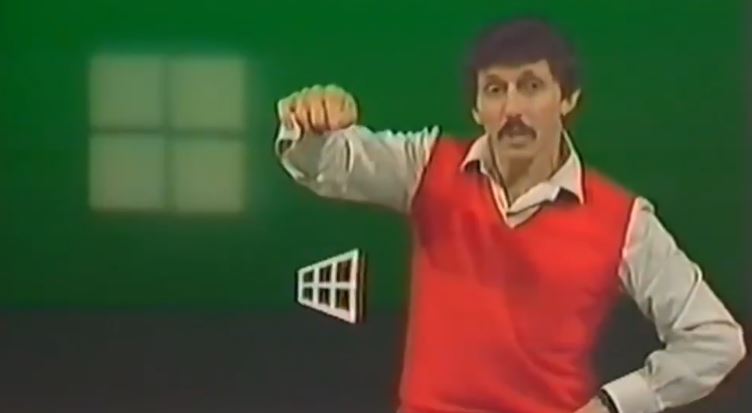 You might not know this, but Australia is a pretty f**ken clever place. Deadset, not only are we the home of the Hills Hoist washing line, box wine, and spray-on skin, but we’ve also got a bit of a tricky hand when it comes to optical illusions. We’ve been doing the s**t for ages too. Seriously, check out this Aussie video from the early 70s and see why it’s recently got people talking about the Ames window optical illusion again…

All right, basically, this one came roaring back into public attention a few days ago. Don’t get us wrong, it never really disappeared, but the internet can sometimes make things seem like they are brand new all over again, and that’s the case here.

right? I've watched it 3 times trying to force my brain to see it "correctly" . With my limited knowledge of 3d would this be something that you could duplicate in blender or something?

When one bloke on Twitter re-shared the video (and we don’t know if he was the first), the video quickly went viral and has since been shared nearly twenty-two-thousand times. It features Deane Hutton on a segment from the old Aussie program called The Curiosity Show.

In it, he’s explaining the Ames window and the fact it just baffles your brain by looking like it’s oscillating when in fact it’s rotating. Old mate then takes it a step further when he shows what happens when you put a pen in the Ames window.

Give it a bloody squiz, and we’ll be blown if you don’t end up wondering just what the f**k is happening. Fair dinkum, the pen literally looks like it’s passing through the solid cardboard.

Classic Ames Window illusion beautifully demonstrated. Of course, it’s enhanced by looking at it in 2D on a screen, as stereo cues are missing, although it also works well in 3D in the flesh as well 👍

Of course, The Curiosity Show doesn’t claim to invent this s**t, and if you want to find out more about it, you can check out the second video we’ve linked below. That one makes a massive experiment that sees Derek Muller pass himself through the Ames window.

Give ‘em both a squiz below.

Final thought: Yeah, we bloody love optical illusions, and we reckon a fair chunk of you lot do as well. Even if they’re oldies but goodies, share some of your faves in the Facebook comments and we’ll all trip balls while we spin out over ‘em.

this illusion broke my brain 🤯 pic.twitter.com/BvgO2TcwFE