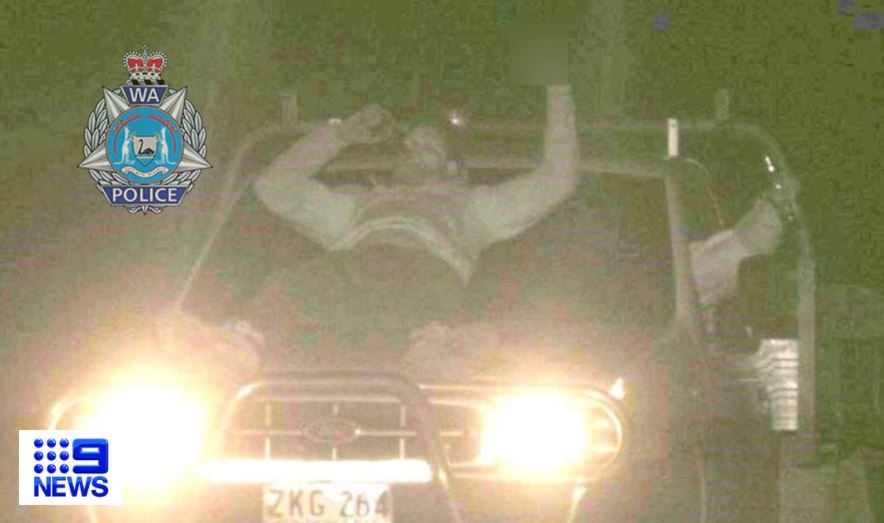 By this stage, we reckon the phrase ‘play stupid games win stupid prizes’ is known everywhere. Yeah, nah, deadset, it is. Still, that doesn’t mean everyone takes it to heart. Take young blokes hanging out with their mates for example. Those guys LOVE stupid games. That, their poorly developed capacity to recognise risk, and their love of beer can be a pretty heady mix, and even when they’re not actually injured, they can still get themselves in trouble.

Before we go on, we say all this because a news story coming out of Western Australia has revealed that a speed camera has captured a pretty f**ken hectic image: a bloody ute travelling at 119 kilometres per hour while one young bloke lies on the bonnet and drinks a beer.

A speed camera has captured a Ford Ute traveling at 119km/h with a person riding on the bonnet of the vehicle.

The cars registration plates are 'ZKG 264', if you see it call police on 131 444 #9News pic.twitter.com/jHXqEHoKqc

As you can see from the pics, he’s having a f**ken blast. You can tell, because, he’s knocking back that bevvy and pumping his middle finger at the speed camera. Yep, fair dinkum, they’ve decided this photograph is worth the fine.

Could be a drunk pedestrian who got hit at a x-walk….

Anyway, the WA cops are pretty keen on finding the lads and giving ‘em a bit of a talking-to, and they’ve shared photos of the incident on Twitter. Unfortunately, they’ve not had much luck getting hold of them.

That’s how Mum used to take me to school.

The vehicle’s fitted with fake rego plates. Paul Papalla, the state’s Minister for Road Safety reckons, “The guy’s lucky to be alive!” He also says, “They may think they’ve gotten away with it, but eventually, they are very likely to be caught and face the full force of the law.”

Apparently, the consequences could total 12,000 Ozzy dollarydoos in fines, a year in prison, and no licence for the rest of their lives. Fark!

Final thought: Now, without wanting to be big wet blankets, you’ve gotta say this is pretty dumb. One wrong move and they’re f**ked – and not because of the fines. If you are a young bloke and you’re thinking something like this is a good idea, just don’t. Yeah, nah, just don’t.