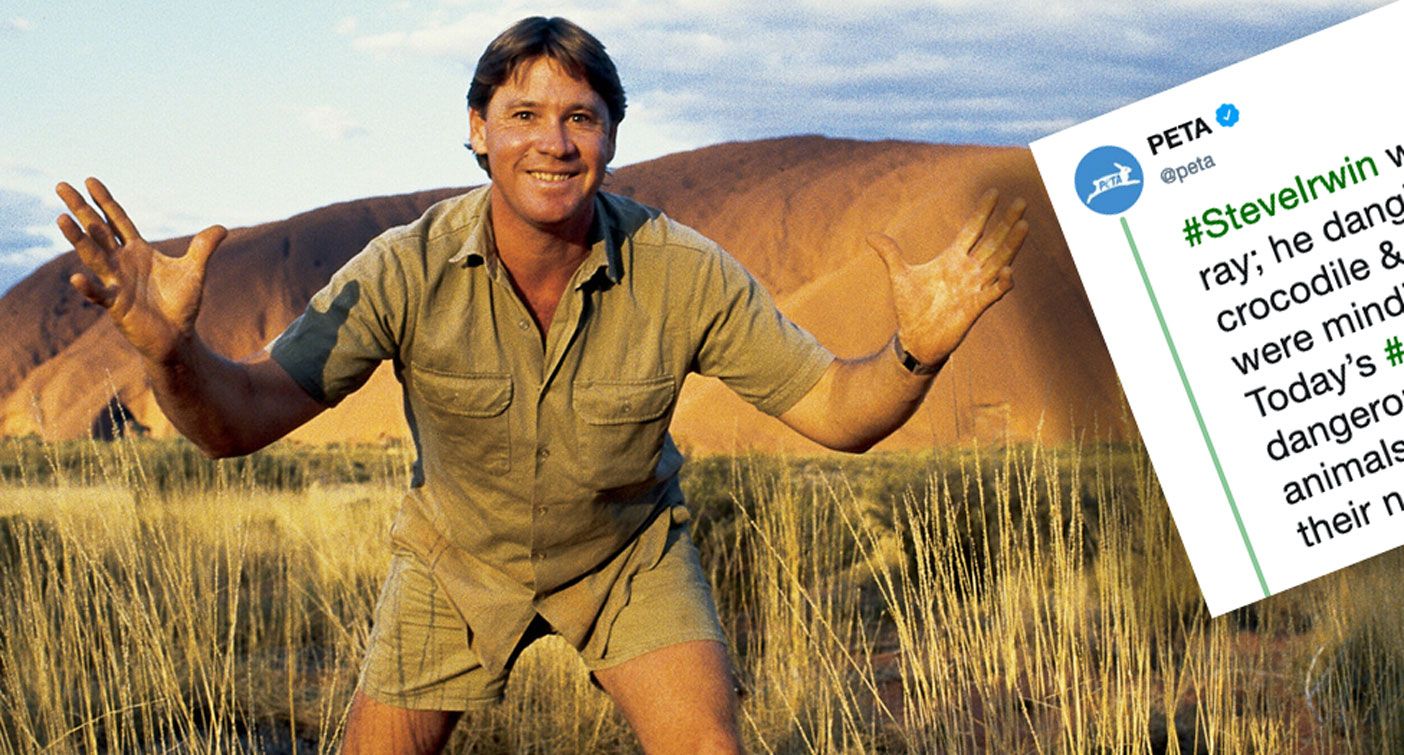 Look, first of all, we get it PETA. We know what you’re trying to do – you wanted free publicity – and to a large extent, the fact we’re even talking about your bulls**t post about Steve ‘the bloody legend’ Irwin means you won. F**ken kudos to you, on that. Having said that, for an organisation that professes to love animals and be about conservation, you really missed the mark on this one and showed yourself as the cheap, nasty, tin pot outfit you are. 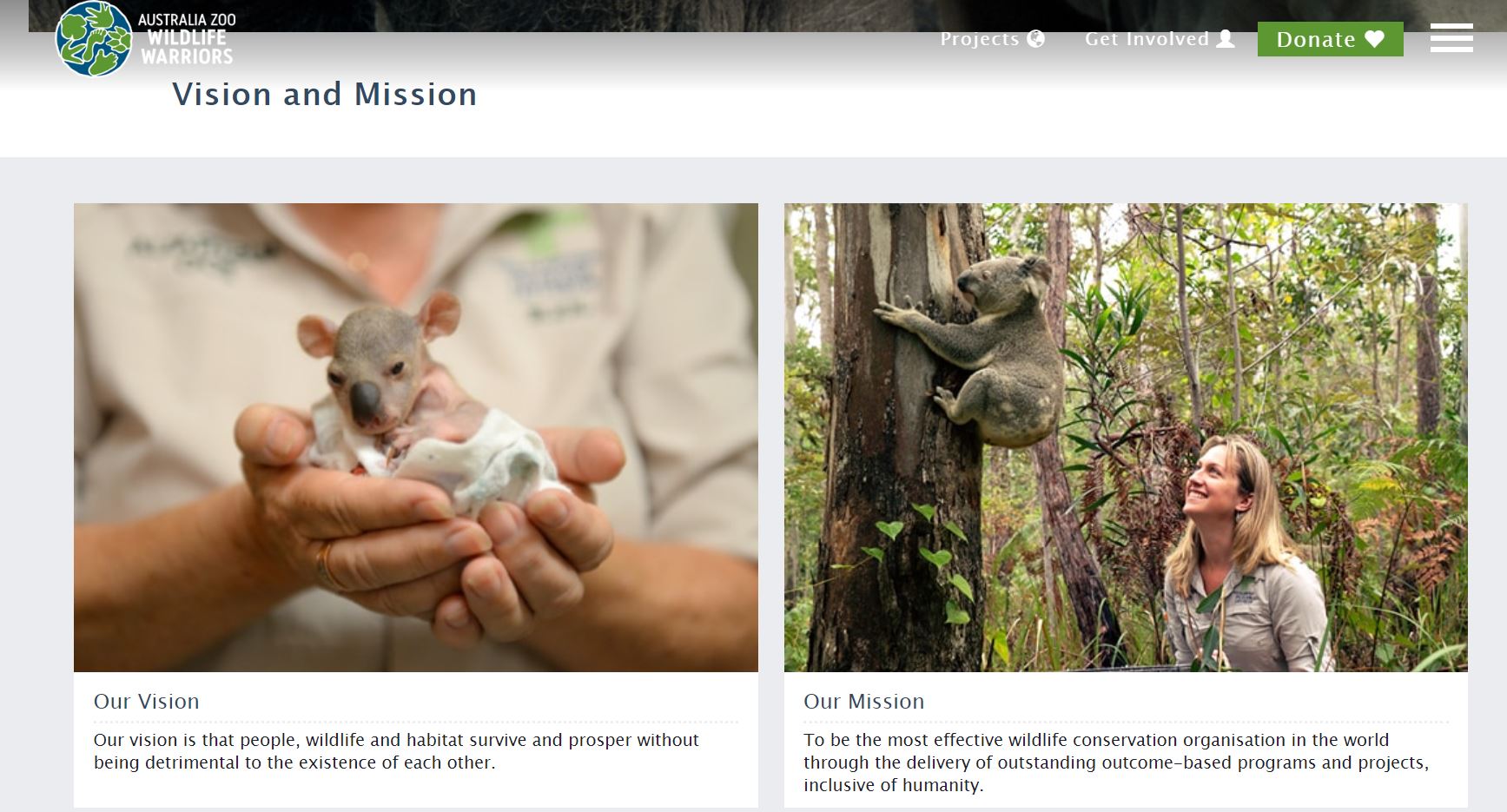 Yeah, we’re gonna come out and say it straight up. Like anyone with a decent set of morals, even a smidgen of a f**k to give about the environment, and a brain in their head, we bloody love the Crocodile Hunter and know that your inane tweet couldn’t have been more wrong. 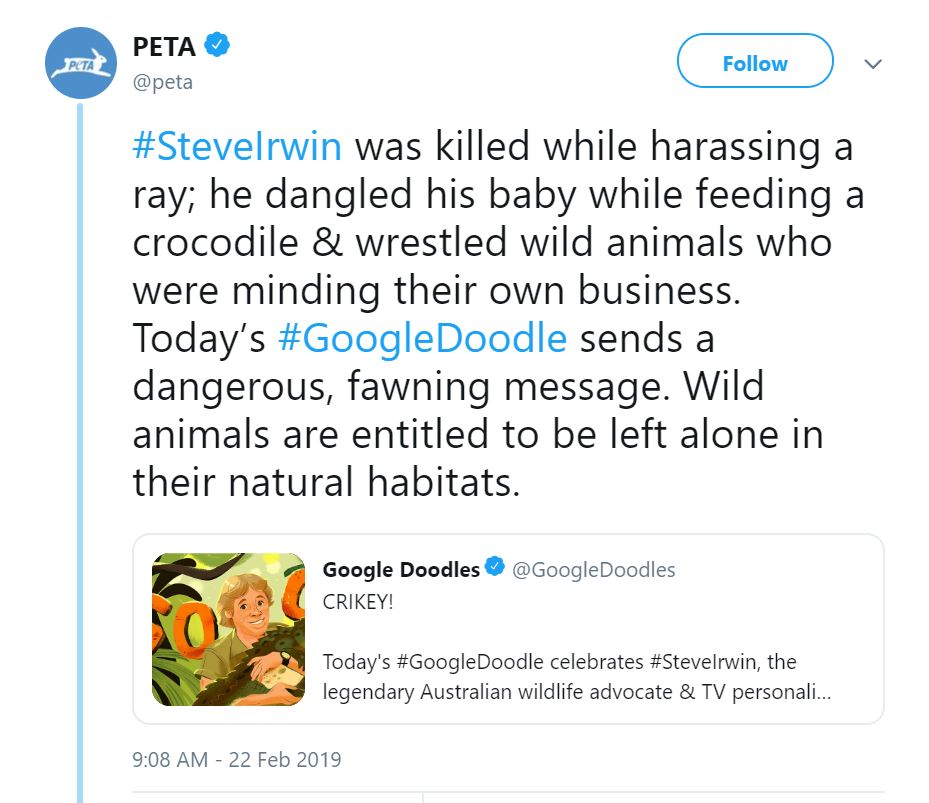 This is some bulls**t. Credit: Twitter/PETA

This message goes out to YOU.
Thank you so much for your extraordinary kindness, strength and support, helping us to continue Dad’s legacy.
He dedicated his life to conservation.
To the world, he will always be known as the greatest Wildlife Warrior.
To us, the best Dad. ❤️ pic.twitter.com/UtAFyndX5r

To really go on a rant about his, we could talk about the fact you’ve euthanized more than 35,000 animals in the last twenty years – including a little girl’s Chihuahua, which you stole from their mobile home and killed before the five day grace period was up, but these are the kinds of things people already know about you. 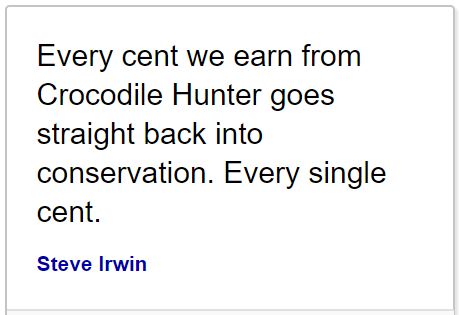 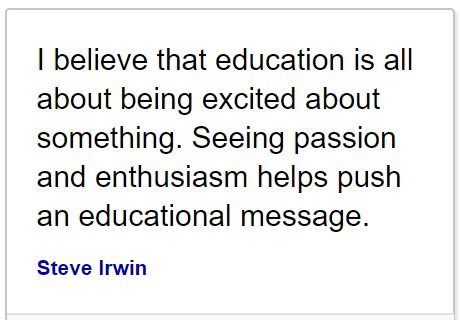 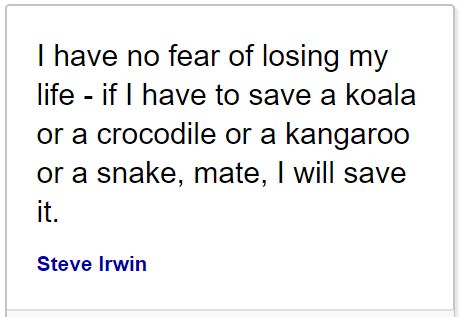 Nah, what we’re gonna talk about is how bloody awesome Steve actually was and how much conservation work that bloody legend was involved in – and which his bloody awesome family still continue to this day. We’re also gonna mention one simple thing: Steve’s passion for animals was what inspired him to do everything he did. The Beerwah reptile park was originally designed to save and rehome ‘problem’ crocodiles that would have been killed without his help. Even once it was bloody huge, he steered people away from crocodile leather and products. His entire life’s work was about conservation. 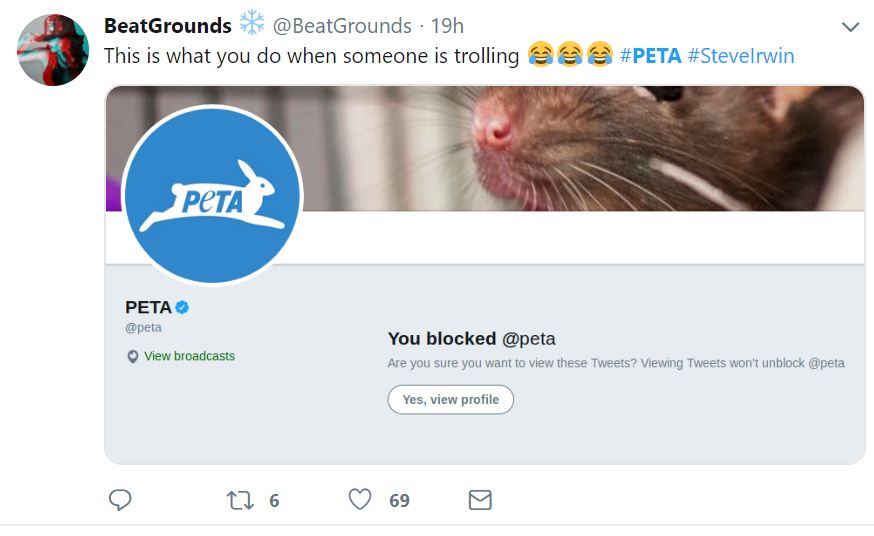 We could talk about his television show. There was an entertainment factor about it that saw him capturing animals and displaying them for the camera. There are multiple examples of him cooing to those creatures, even kissing them, but we reckon you’ll be hard-pressed to find him harassing them. And why do you think he used to go to great lengths to show people those animals were little ‘bewdies’? He wanted others to be as passionate about saving them as he was, ya bloody numpties. 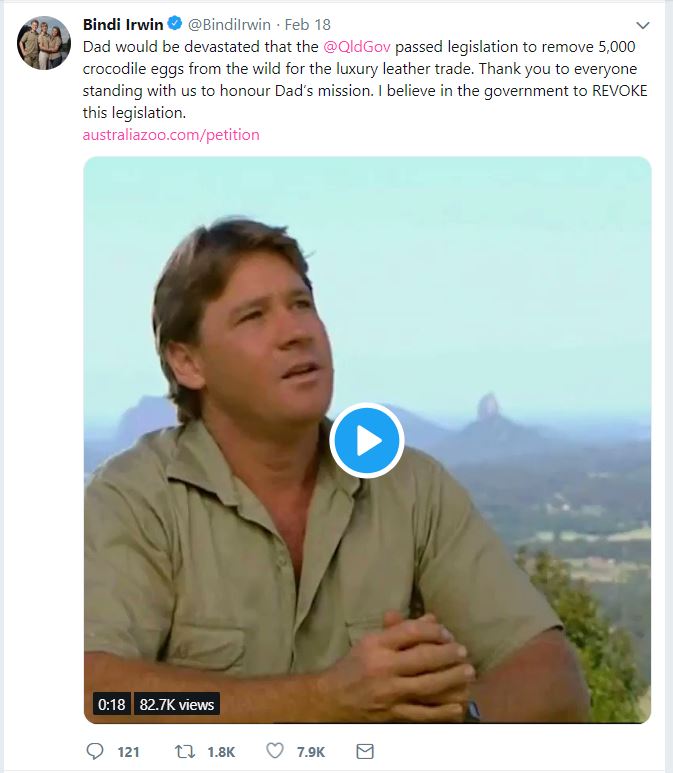 By all means, PETA, don’t eat f**ken meat. Protest against animal cruelty. These ideas are bonza ones that most people in their right mind support even if they don’t practice them. Believe it or not, we actually reckon the goal of your work comes from a good place, but when you’re so insensitive you actually reckon it’s okay to speak s**t about someone who probably agreed with many of your goals – and would no doubt have hated your methods – you need to have a good hard look at yourselves.

S**t, the dude’s family is still out there and would probably like to be able to remember their Dad’s birthday like most normal people. And we can actually tell you as a fact that Steve was an everyday normal guy. He wasn’t a bloody celebrity lunatic. He was the awesome – if slightly kooky – bogan bloke from up the road who wrestled crocodiles and snakes in his spare time. 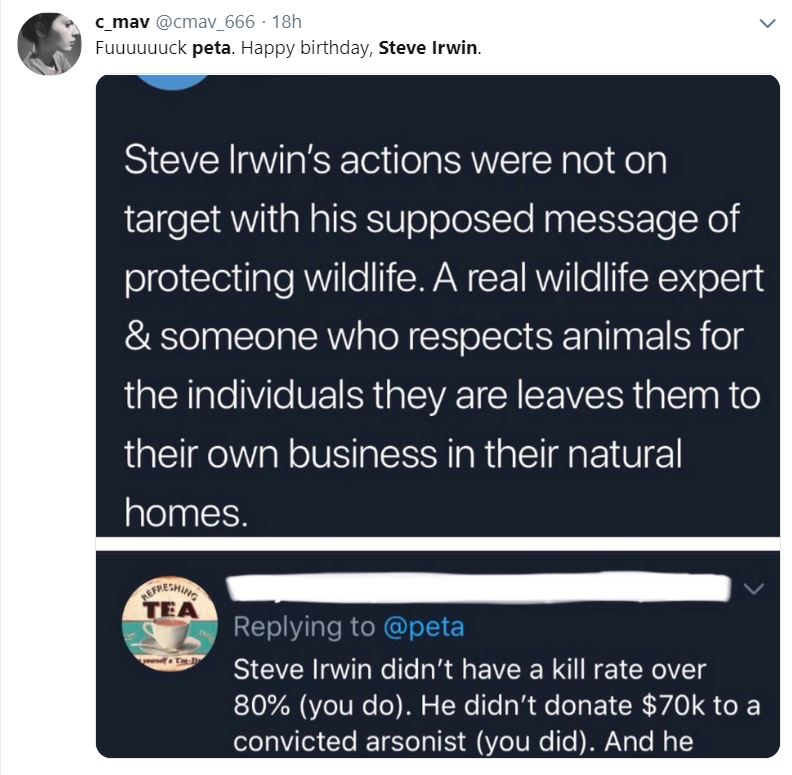 But yet, despite all that, you chose to score points through ‘rage marketing’. F**ken good onya, PETA. If people didn’t know you cared more about controversy than you did actually saving wildlife, putting s**t on someone who’s purchased half a million acres of land solely for the conservation of native species and whose legacy is the education of millions about the need to conserve wildlife, has showed ‘em that. F**ken jog on and go back to doing what you do best: killing pets you’ve promised to rehome. 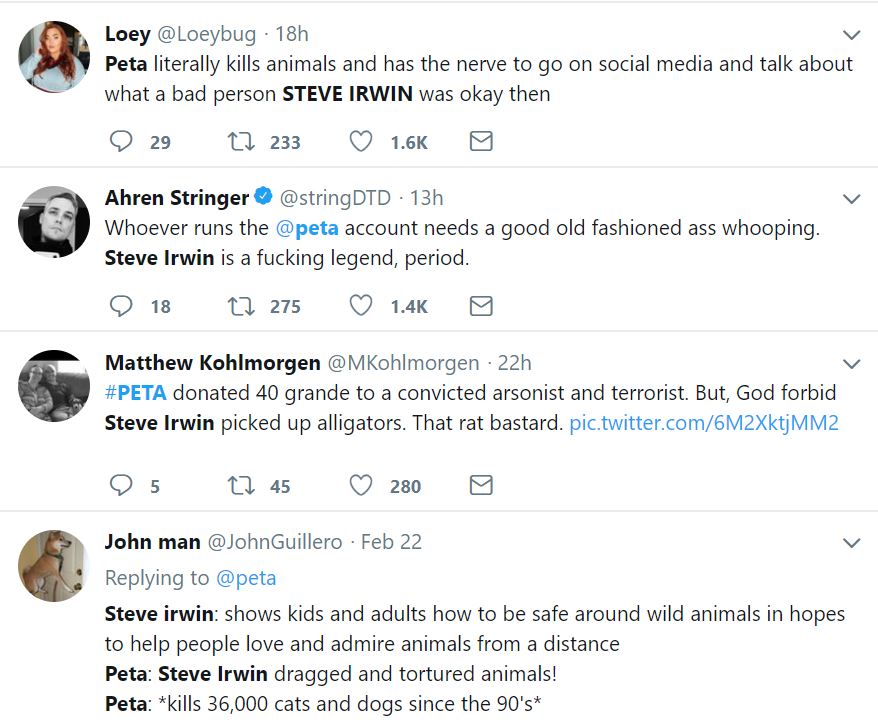 Final thought: We’ve said it before and we’ll no doubt say it again: we love Steve. We reckon that the best way to respond to PETA’s ridiculous controversial marketing method is simply this. Share the awesome facts about Steve’s work on Twitter, on Facebook and on Instagram. Don’t mention f**ken PETA. Don’t give ‘em what they want. Remember Steve as the wildlife warrior and local hero he was.

If you really want to do something for wildlife conservation, get involved with Steve’s legacy here.