We all know that the s**t the Mexican cartels get up to is pretty f**ken monstrous. Yeah, those guys are fair dinkum not here to f**k spiders. Now, footage has been released showing a cartel drone dropping bombs on a rival camp before crashing, possibly after being shot out of the sky. Check it out below…

OK, this footage came to light a couple of days ago, and allegedly, it reveals an attack orchestrated by the Jalisco New Generation, a drug cartel that has rapidly become one of the country’s most feared cartels thanks to its penchant for ripping out victim’s hearts, targeting pregnant sheilas, and dissolving bodies in acid. 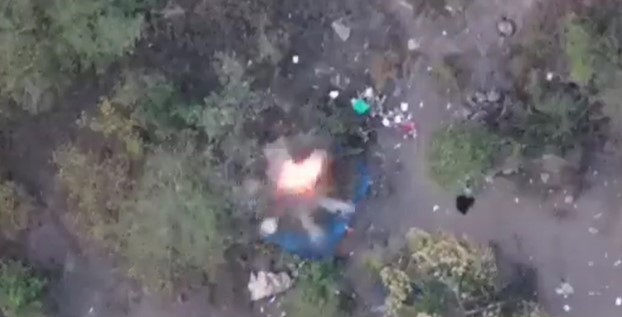 Clearly, they’re heavily armed, and according to local reports, they’ve now bombed two towns in the city of Tepalcatepec, El Bejuco and La Romera, with the aim of taking control of the city.

The footage shows four bombs being dropped on an encampment while people run for their lives. A second video shows the drone crashing to the ground, and reports suggest it might have been shot out of the sky.

Now, we don’t know about you guys, but we reckon this s**t is f**ken hectic. Deadset, the potential damage this kind of attack could cause – not to mention the indiscriminate death – is pretty f**ken full-on.

The New York Post says, “The Jalisco New Generation Cartel is now considered the most dangerous and powerful cartel in Mexico,” with an empire that reaches around the globe.

In line with that, the US Drug Enforcement Agency has placed a $10,000,000 reward for info that leads to the capture of the cartel’s leader, Nemesio ‘El Mencho’ Oseguera Cervantes.

Final thought: Yeah, give this one a squiz and let us know what you reckon in the comments section. Scary stuff.

In the second half of the video, the drone crashes, possibly after being shot down pic.twitter.com/I4gF7zcII4