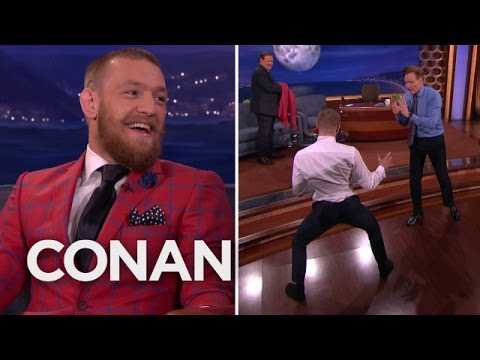 It has ticked over to Fight Day folks.

McGregor made an appearance on Conan on TBS last night to chat about the upcoming fight against Nate Diaz.

He mentioned a kick he’s been refining called the “Capoeira Kick” and how he might ping it across Diaz’s head.

McGregor also gave a demonstration of the kick.

It’s fast as lightening and would be pretty amazing if he actually uses it tomorrow.

You can see Conan shit himself in the replay after the demo. Video below:

What do ya reckon?

Was “Mystic Mac” just joking around with this prediction or will he be confident enough to give that fancy move a go?

Lookin’ forward to reviewing the fight!