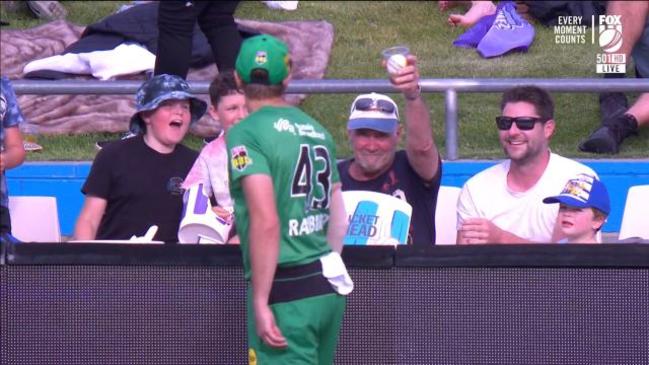 Life is full of rules. Deadset, it seems like everywhere you go there’s some arbitrary bulls**t you need to follow. We’re not here to talk about the boring rules today, though. Yeah, nah, sometimes rules are fun. Sometimes, you realise that the rules were made to ensure everyone has a good time and they may well have been made by your mates. Here in Australia, we have a similar rule to the one the yanks have at baseball games: if the ball goes in your cup, you have to skol your beer – with the ball inside. And that’s what you’re gonna see right now…

Beer and cricket are just two of the greatest things about this time of year in Oz, and during a match between the Hobart Hurricanes and the Melbourne Stars, Dawid Malan, one of Hobart’s batsmen f**ken smashed the ball for six.

This one didn’t only clear the boundary, though. Yeah, nah, it went straight into the crowd where one bloke fumbled the catch before it landed in another dude’s beer. From there, the story tells itself, but now that it’s hit the internet, people are calling it one of the most Aussie catches they’ve seen.

The ball landed in his cup after a fumbled crowd catch.

The commentary team bloody loved it too. Have a go at ‘em pretending they don’t know what’s happening. Mark Waugh was the first to notice that it was in the cup, but it was Brendan Julian who asked “What about the COVID? He doesn’t want to touch it. You can’t give it back without the beer.”

Still, all the credit goes to Uncle Granddad who made the catch. Even with the ball wedged firmly in the cup, he does a stellar job of trying to drink it all.

Good on ya, mate.

Final thought: Yeah, this is definitely the kinda rule we can get behind. If the ball goes in your drink, you’ve gotta drink it. Just keep Brendo’s thoughts in mind and hope that the alcohol kills the virus. Yeah, nah, she’ll be right, mate. She’ll be right.