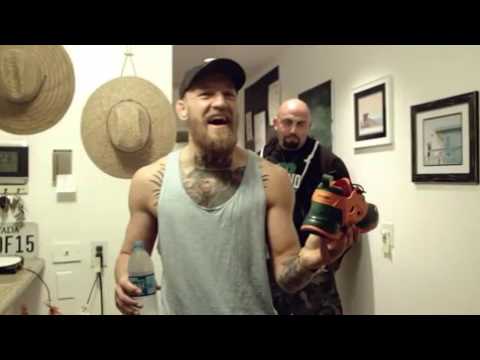 McGregor Crashes The Apartment Of A Super Fan

We’re getting closer and closer to the McGregor vs Diaz fight day on Saturdee, so naturally Conor is being followed around more than usual by camera crews.

In the latest pre-fight adventures of McGregor he decides to visit the house of a fan.

Every morning on his drive to the gym he spots a cardboard cutout of himself on a blokes balcony.

The fan balcony is also nicely decorated in Irish flags.

Yesterday morning McGregor decided it was time to investigate the abode of the bloody super duper mega fan.

Check out the vid below:

That was a fair dinkum top bloke move by McGregor. He absolutely made that fellas day. Week. Month. Year.

No matter how arrogant McGregor gets before and after fights ya gotta remember it’s all contrast by how down to Earth he is as well. It’s funny how he has an ego that I can respect. Probs because it’s deserved and he’s worked hard (opposed to wankers who have an ego and do fuck all).

Yeah nah that’s my feel good story for the morning. The cynic and critic in me hopes it wasn’t stealthily an advert for Reebok as there was a sly mention of shoes in there. The shoes happen to nicely be within reach of McGregor– ok, I’ll stop.