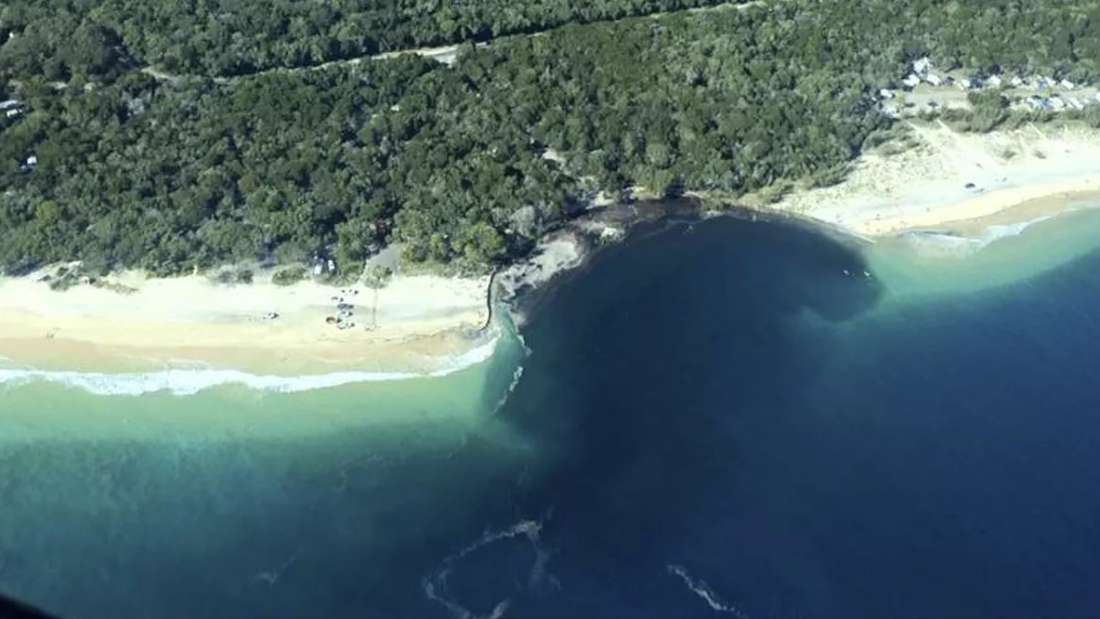 A huge sinkhole just swallowed up a beach in Australia

No matter where you are in the world, there are a couple of universal truths that most of you either know or would at least have heard about the place we come from, Ozzy Land. First of all, we have awesome wildlife – and most of it’s capable of killing you – and second, we have bewdiful f**ken beaches. The first one is pretty much true although I reckon the dangerous nature of some of our critters is a bit overstated – usually by us in the hopes of scaring the tourists! Sure, we’ve got some doozies, but stay away from them and you’ll be right. As for the beaches, well, how can you argue? Just don’t mention this story to the tourists and that one is about spot on!

So, the ‘this’ we’re talking about here is a big bloody sinkhole that just keeps opening up on the Queensland coast. Now, Queensland’s a pretty f**ken rad place. It’s got the Barrier Reef; it’s got the Capricorn Coast, the Gold Coast, and the Sunshine Coast. 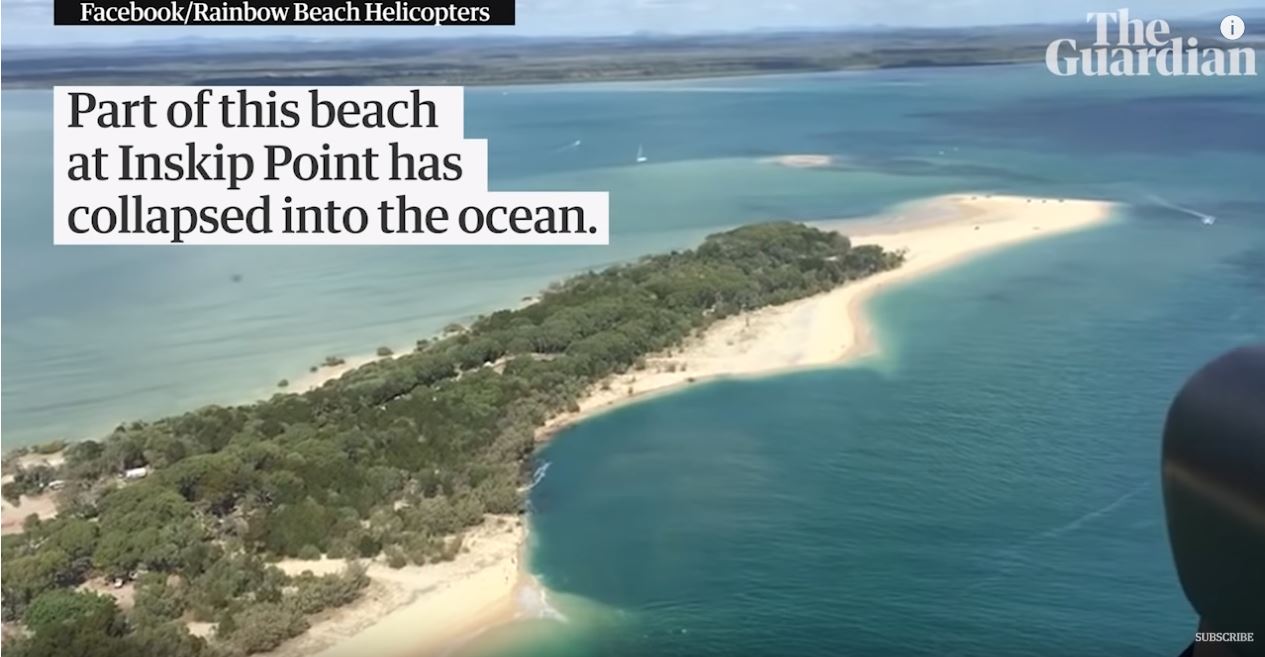 And of course, with all these great beaches to choose from, the sinkhole has only decided to go and swallow up a large portion of one of our cooler beaches. You might have heard of Rainbow Beach. It’s the place famous for its rainbow coloured sands and its collection of backpackers.

Anyway, it’s school holiday time here in Ozzy Land, and in Queensland the weather is just about to start warming up – while still maintaining a pretty relaxed average temperature, making it perfect for camping. Guess what there heaps of at Rainbow Beach? F**ken campsites. Deadset. 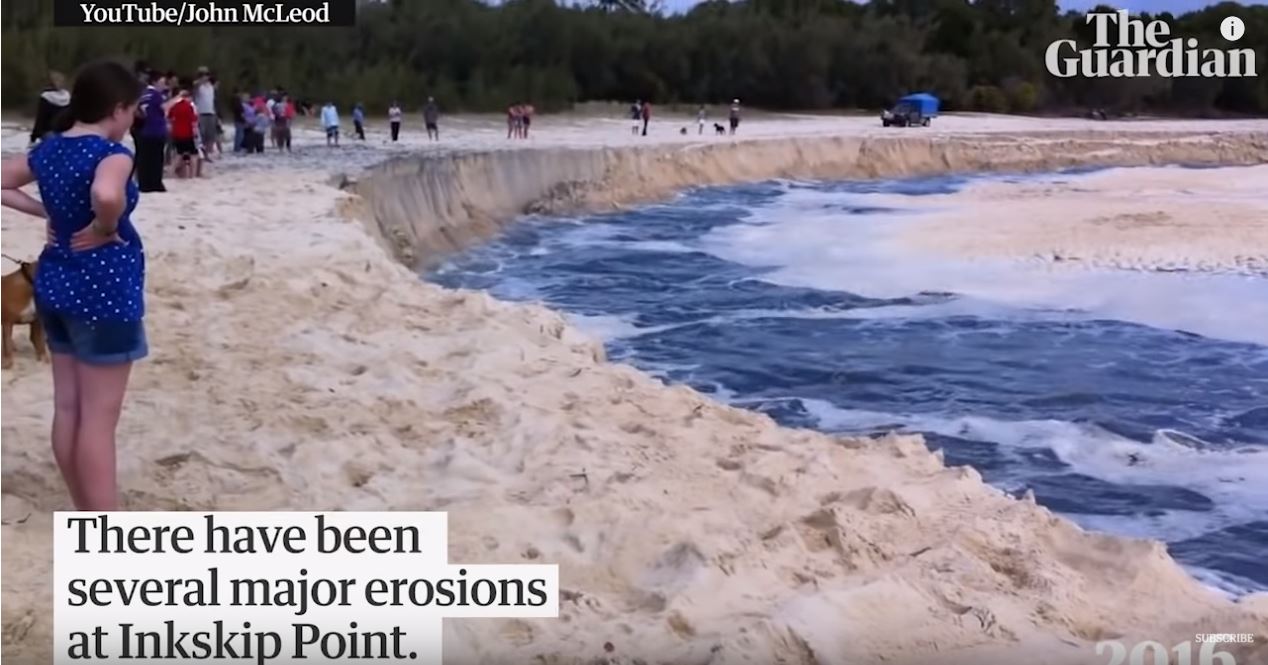 The 2016 sinkhole at Inskip (You’ll have to excuse their typo.) Credit: YouTube/John McLeod

Fortunately, the sinkhole hasn’t repeated its last effort and opened up in a location that could swallow vehicles and tents – which it bloody well did in 2016!

The Queensland Department of Environment and Science has come out to say, “It’s likely this erosion has been caused by the undermining of part of the shoreline by tidal flow, waves and currents. When this occurs below the waterline, the shoreline loses support and a section slides seaward leaving a hole, the edges of which retrogress back towards the shore.” ” In fairness, that’s a relief. We thought it might have been a concerted attack by sharks.

Nah, just shitting ya. Sharks just wait for you get in the water. 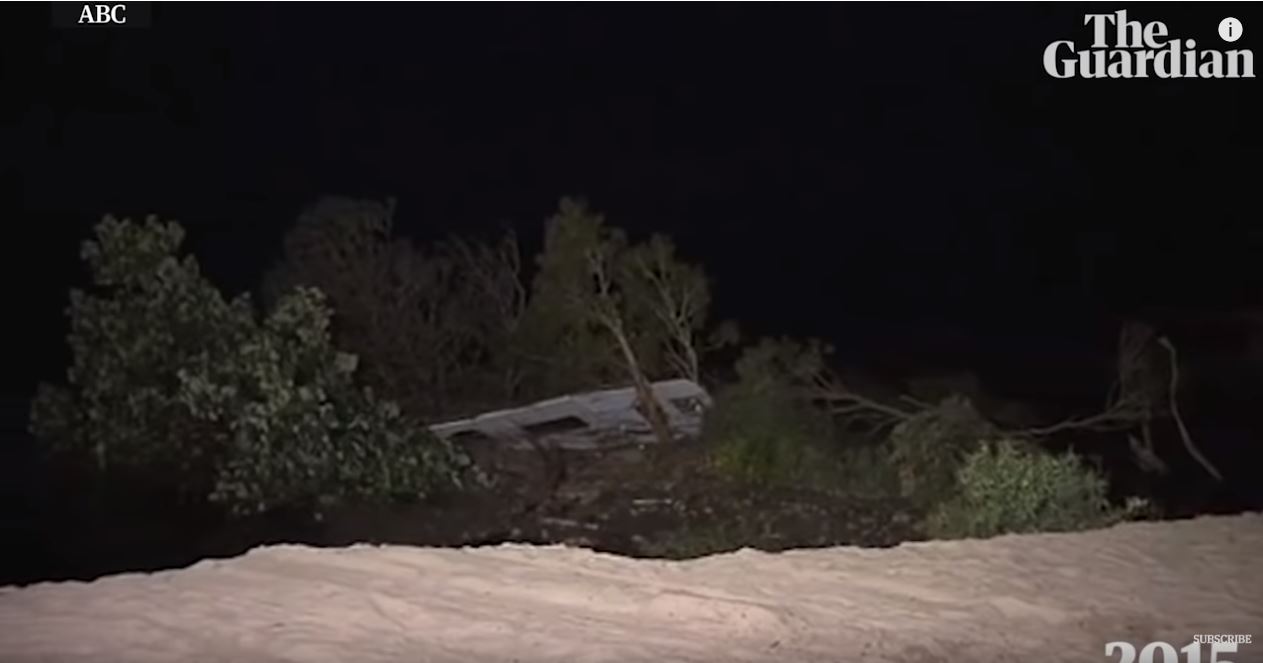 The doozie of a sinkhole eating someone’s caravan in 2016. At least it gets them off the road, right? Credit: ABC

Final thought: Sometimes nature is pretty f**ken rad. I mean, imagine if you were going for a bloody stroll and that shit happened under your feet! Anyway, it’s all a natural process and landscapes do change over time. It’s great that no one was hurt and no real damage was done.