Marine breaks up fight between students with flying spear tackle

By now, we’re pretty much all aware of the ‘one punch can kill’ mantra, and there’s a good reason for that. One punch can kill. As you know, it only takes one dodgy fall for a head to be broken like a bloody egg. Of course, in a place like a school, where young blokes are under the sway of puberty, peer pressure and hormonal imbalances, fights still happen. Naturally, someone’s gotta break them up, but the question is just what is the best way to go about this?

The reason we’re saying this is because we’ve just been made aware of a recent news story from the States that saw a Marine given desk duties after breaking up a fight between two schoolkids.

Now, if you’ve seen the video, you’ll know that old mate’s technique was pretty bloody gung-ho. What we’re wondering is whether or not that makes it wrong? 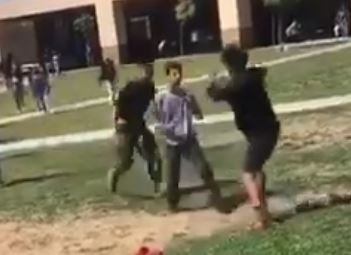 Let’s break it down:

When the video opens, the two kids are swinging punches and generally trying to blood each other’s noses, black each other’s eyes and feed each other old-fashioned knuckle sandwiches. Before you can even blink, an eighteen-year-old Marine named Josue Valdez Sarmiento is on the fuggen scene!

Coming from behind faster than a bloody sneak attack, he just friggen annihilates the kid closest to him. It’s a tackle that’s gonna leave anyone with stars circling their furrowed brow. Making it worse, the head of the kid he smashes whips forward like a cat of bloody nine tails!

Also, fricking CRACK. The kid’s head smashes the other kid’s head and Sarmiento is left to clean up the mess. The onlookers kind of give a collective what the f**k and the fight’s over. 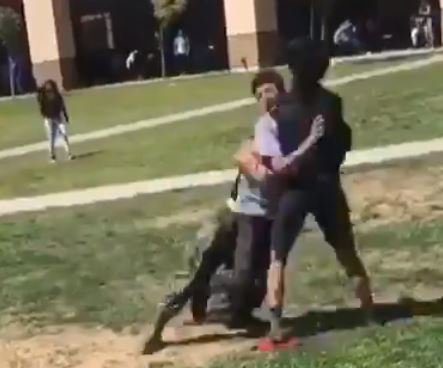 Now, Sarmiento has been given desk duties in response to his actions, but some are saying he did the right thing and shouldn’t be punished.

To give you a little context, he was helping with recruitment of young Marines on the day and, clearly, acted on a whim. His boss, Maj. Thomas Driscoll says, “He saw a dangerous fight break out. Upon observing that situation, he moved over and broke up the fight. Although, the manner in which he did [could] have been improved, we are proud of Pfc. Valdez Sarmiento for his decision to intervene.”

A parent even told Fox News, “It could have been a little less of a tackle, but I believe in discipline. These kids were not behaving. Someone’s got to stop it.” 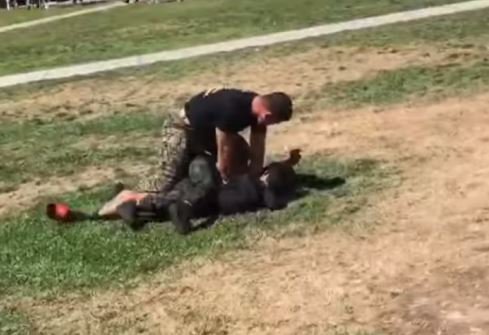 Final thought: Simple question for you legends: was it a bit much or was he doing the right thing? For us, it’s a bit much. It’s well-intentioned, but bloody hell, ease up tiger. What do you reckon?