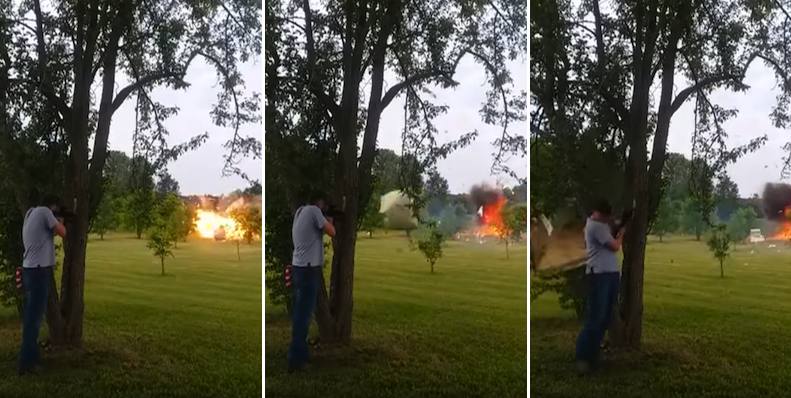 Dudes Nearly Kill Themselves After Shooting Fridge Filled With Explosives

In this clip, some dudes in America are letting their inner children out for playtime with a gun and some explosives. They fill an old refrigerator with the explosives and shoot it with a rifle.

It’s actually a fu*king awesome idea: who the hell doesn’t like explosions? It’s their execution that nearly ends up costing their lives.

If it was me, I’d definitely be standing behind a bigger barrier than the tree that they selected but these guys clearly don’t give a sh*t! The shooter fires his rifle at the fridge, hits it square on, and all hell breaks loose: the fridge explodes and flies straight towards the group, narrowly missing them. If it had hit someone at that speed, it would have meant almost certain death.

Hindsight is always 20/20 vision but, goddamn, these guys could have easily found themselves on this year’s list of the Darwin Awards. The Darwin Awards are a dubious, tongue-in-cheek honour that originated back in 1985 but really took off with the creation of the website in 1993. It’s since become a global phenomenon and has resulted in a series of books being published that document people dying in the stupidest ways known to man.

The website states: “In the spirit of Charles Darwin, the Darwin Awards commemorate individuals who protect our gene pool by making the ultimate sacrifice of their own lives. Darwin Award winners eliminate themselves in an extraordinarily idiotic manner, thereby improving our species’ chances of long-term survival.” This guy is a prime candidate

All this said…we’ve seen a lot of videos on the internet that are fake as fuck. You reckon this is one of ’em?

CHECK IT OUT FOR YOURSELVES ON THE PLAYER BELOW: