If there’s one thing we love here at Ozzy Man Reviews, it’s bloody pizza. Deadset, that s**t is the food of the gods. Of course, humans aren’t the only ones who know that. Apparently, in California, a bear has figured it out too. Just as bloody Yogi bear loved to steal picnic baskets, this big 500lb b**tard has developed a serious hunger for human food, forcing him to break into some 28 homes…

Yeah, obviously, when you take the cartoonish stereotype away this isn’t an ideal situation. Still, by all accounts, Hank the Tank is a pretty benign fella. We’ll get to that in a moment, though. We’ll start at the beginning.

Take a look at Hank… 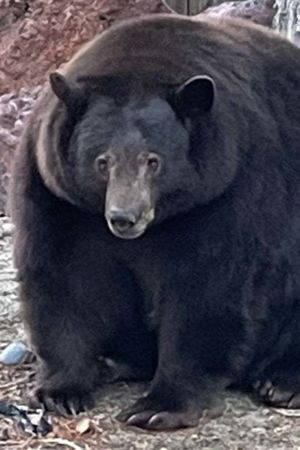 As you can see, he’s a big boy. To put into perspective just how big he is, he weighs 500lb. The Washington Department for Fish and Wildlife says the average Western US black bear weighs between 100 and 300lbs.

Since July, he’s broken into 28 houses, and is known to be ‘extremely food-habituated.’ In layman’s terms, that means he’s always f**ken hungry, and we can relate to that. What’s not good though is best summed up by Peter Tira, a spokesperson for the California department of fish and wildlife.

He reckons, “It’s easier to find leftover pizza than to go in the forest,” but that, “it’s a potentially dangerous situation” because “this is a bear that has lost all fear of people.”

So far, nothing is keeping him away. Authorities have tried loud sirens, dry-firing tasers, and a bunch of other techniques, but it’s not working. Just last week, Hank forced his frame through a window and stole a bunch of food from inside the house.

Authorities are reaching their last straw and have warned that if they can’t stop Hank, they may have to ‘euthanise’ him. Yeah, nah, they reckon they might have to kill the poor b**tard.

Ann Bryant, Executive Director of the Bear League rightfully reckons that’s bulls**t. She says, he obviously didn’t get to twice the average size by ‘eating berries and grubs’ but he doesn’t deserve to die for his hunger.

“He just sits there and eats. He doesn’t attack (people). He doesn’t growl. He doesn’t make rude faces … Why should this big dummy die?”

Doors are no match for Hank the Tank pic.twitter.com/9982bFE9ye

We agree. Surely, there’s gotta be a wildlife park for him if they’re worried about him harming someone. Surely.

Final thought: Honestly, we don’t have to live with a f**ken bear breaking into our home, but we reckon there has to be a better solution here. Hopefully, they sort it out sooner rather than later.

Hank the Tank, a 500-pound bear, is on the loose – breaking into almost 30 homes and eating pizza. Harambe 2.0? @KFCBarstool @KFCradio pic.twitter.com/uaijKICtJQ

F**KEN UPDATE! Holy s**t! After writing this, we just found out that bloody Hank isn’t just one bear – he’s actually three f**ken bears! According to the Wall Street Journal, “New DNA evidence examined by the state wildlife department shows Hank isn’t the only suspect after all. At least three bears—two female and one male, believed to be Hank—were likely responsible for the incidents over the past seven months in or near the city’s Tahoe Keys neighbourhood.”

Turns out, Hank the Tank wasn't on a one-bear crime spree — he had accomplices.

And thanks to DNA evidence clearing his name, Hank won't be killed or moved to a sanctuary. https://t.co/Nff3AVWKDi

In response, Peter Tira, who we mentioned earlier, said, “As a result of this, we can’t pin all this damage on one particular bear. Ultimately this is the best outcome possible for a wild animal to remain a wild animal.”