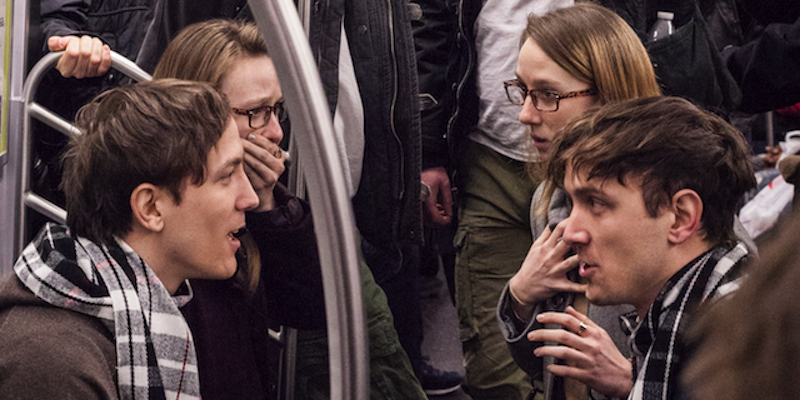 Usually, when I see the word ‘prank’ in the title of a video, I shudder at the thought of yet another fake, scripted piece of bullsh*t that solely relies on actors and invariably leaves their audience disappointed. But this is actually fu*king awesome…

A comedy collective known as Improv Everywhere decided to pull an elaborate time travel prank on the New York subway. It begins with a guy named David asking passengers for money so he can complete his time travel machine. Most people think he’s just found a unique way to beg but one passenger actually gives him some cash.

At the next stop, a scruffy version of David enters the carriage and starts pleading with his younger self not to build the time machine, explaining warning him that “the future is bleak.”

By this stage, people have gone from politely ignoring the potentially crazy dude to laughing at the scene unfolding in front of them. “The future is bleak!”

Then the group step it up a notch as things go from unusual to downright crazy. I’m not going to ruin it for you, here, just watch the video and enjoy.

Improv Everywhere is a New York City-based comedy collective that was created back in 2001 by a fella named Charlie Todd. The group stages unexpected performances (or ‘missions’) in public places and its aim is to surprise and delight strangers through positive pranks.

Over the past 16 years, they have staged over 150 projects involving thousands of undercover performers. Some of their notable performances include making time stop at Grand Central Terminal, letting random strangers conduct a world class orchestra in the middle of Manhattan, and recently, getting thousands of people to take off their pants on subways in over 60 cities around the world.

Improv Everywhere: restoring people’s faith in pranks since 2001. Check out these guys in action! WATCH THE IDENTICAL TWIN TIME MACHINE PRANK ON THE PLAYER BELOW: