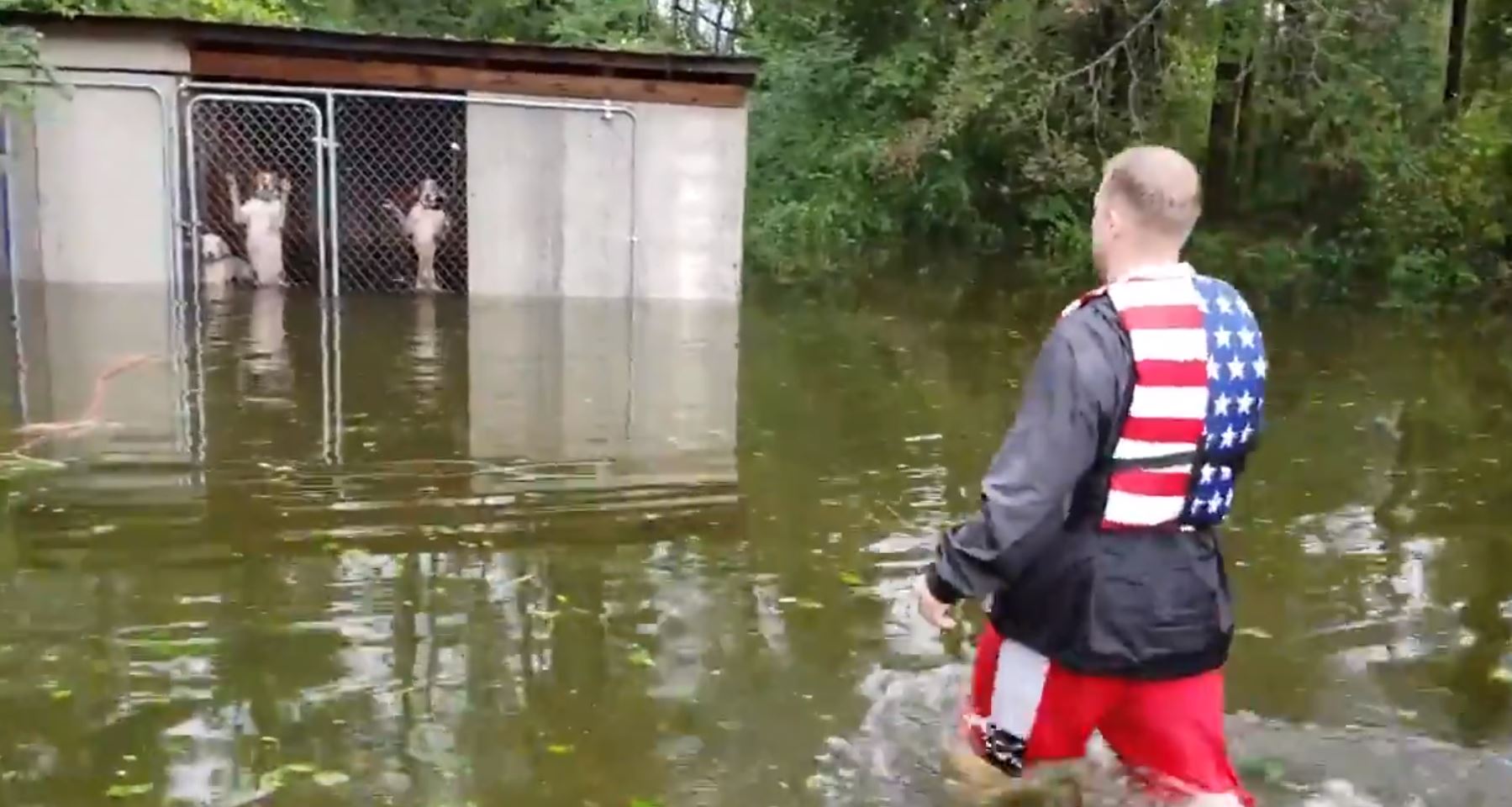 We’ve mentioned before that flooding is a f**ken nasty business. When those waters come rushing in, sweeping all before them and destroying houses and homes; the helicopters fly overhead to rescue the lucky ones, and the news media comes in to report on the tragedy, we all too often think only of the human cost. That’s a real shame, and while sometimes, you just can’t do anything about it, we’ve got a good news story for some lucky dogs in today’s video.

Let’s start by saying, “Thank f**k, you absolute legends!” What we’ve got is an area that’s been hit by flooding as a result of Hurricane Florence. In case you’ve been living under a rock, Florence has been a real bitch of a storm. With over a million people ordered to evacuate and get to higher ground and thirty-one and counting on the death toll, people have had to get the f**k out of town very, very quickly. 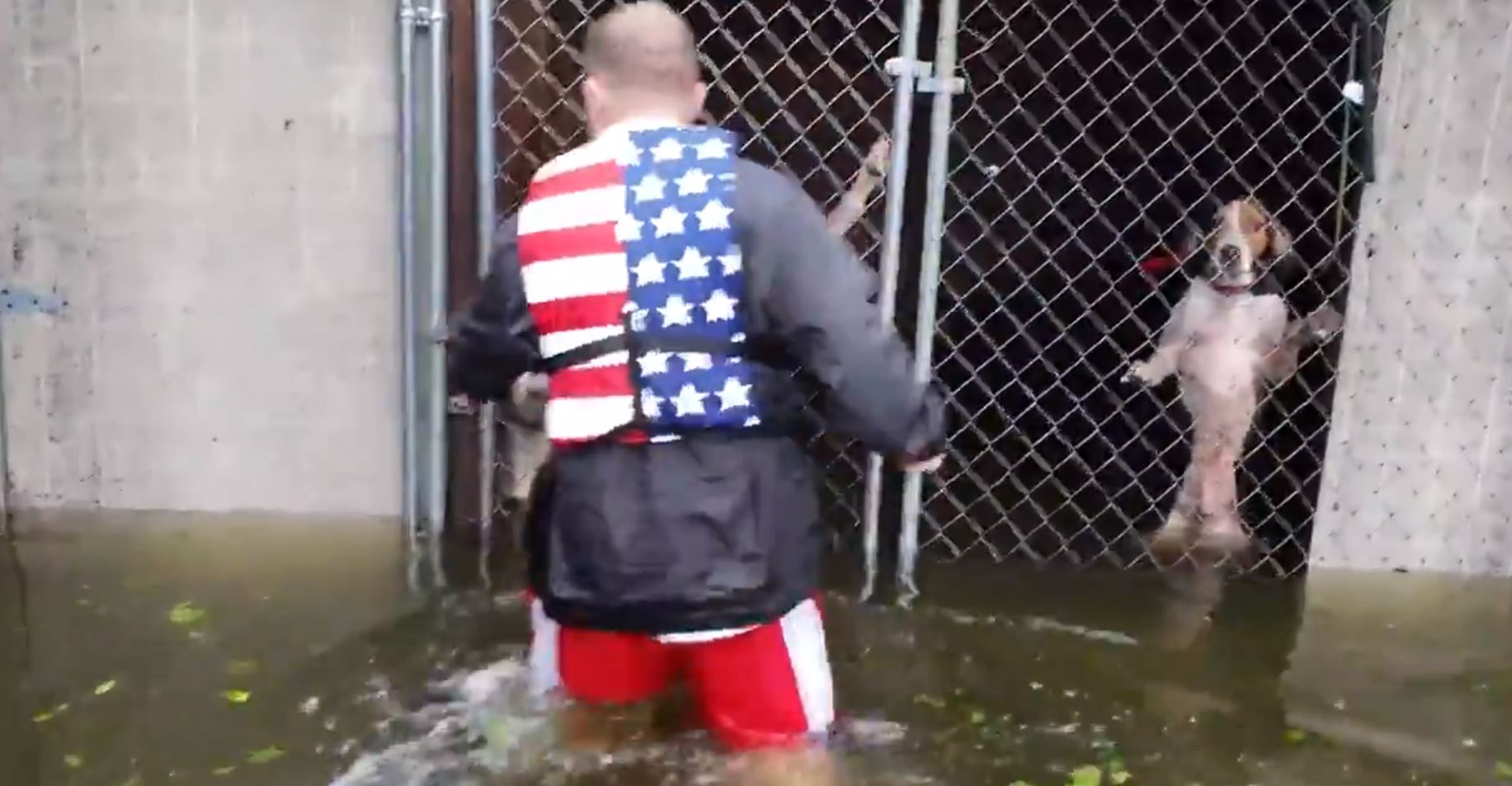 Unfortunately for the good doggos in this video, that meant their owners got the f**k out, leaving them trapped in their kennel. Now, in the interest of fairness, we don’t know what happened here. It’s very easy to jump to the conclusion that they didn’t care, but as unpleasant as it is, this could have been an unfortunate circumstance or an unavoidable moral dilemma. 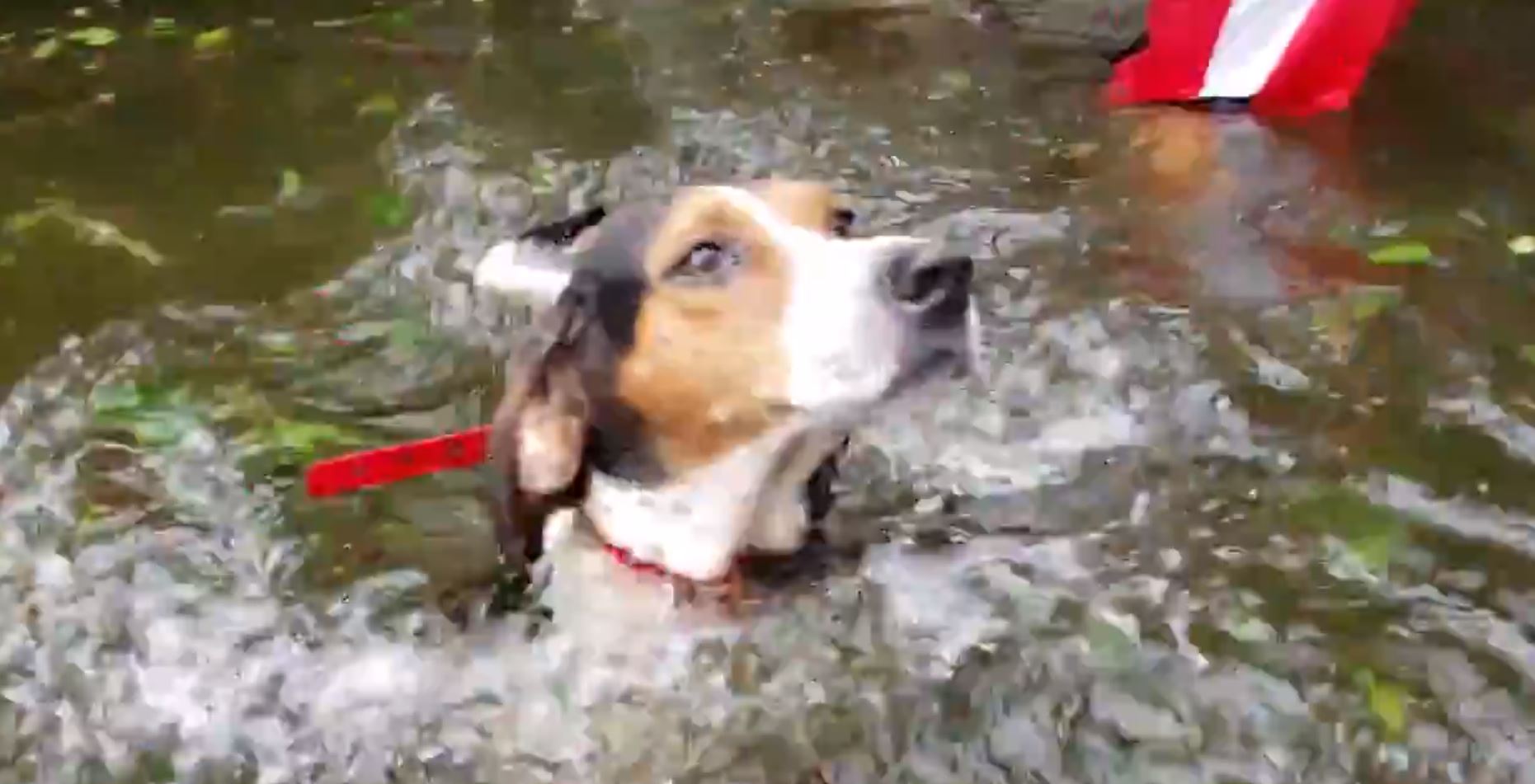 Sh*t, the owners could have been out of town when the dog-walker was evacuated, they could have mistaken just how much the waters would rise, they may have experienced another tragedy we just don’t know about. And, if all of that is bullsh*t and the owners are just c**ts, there’s undoubtedly some badass karma coming their way. 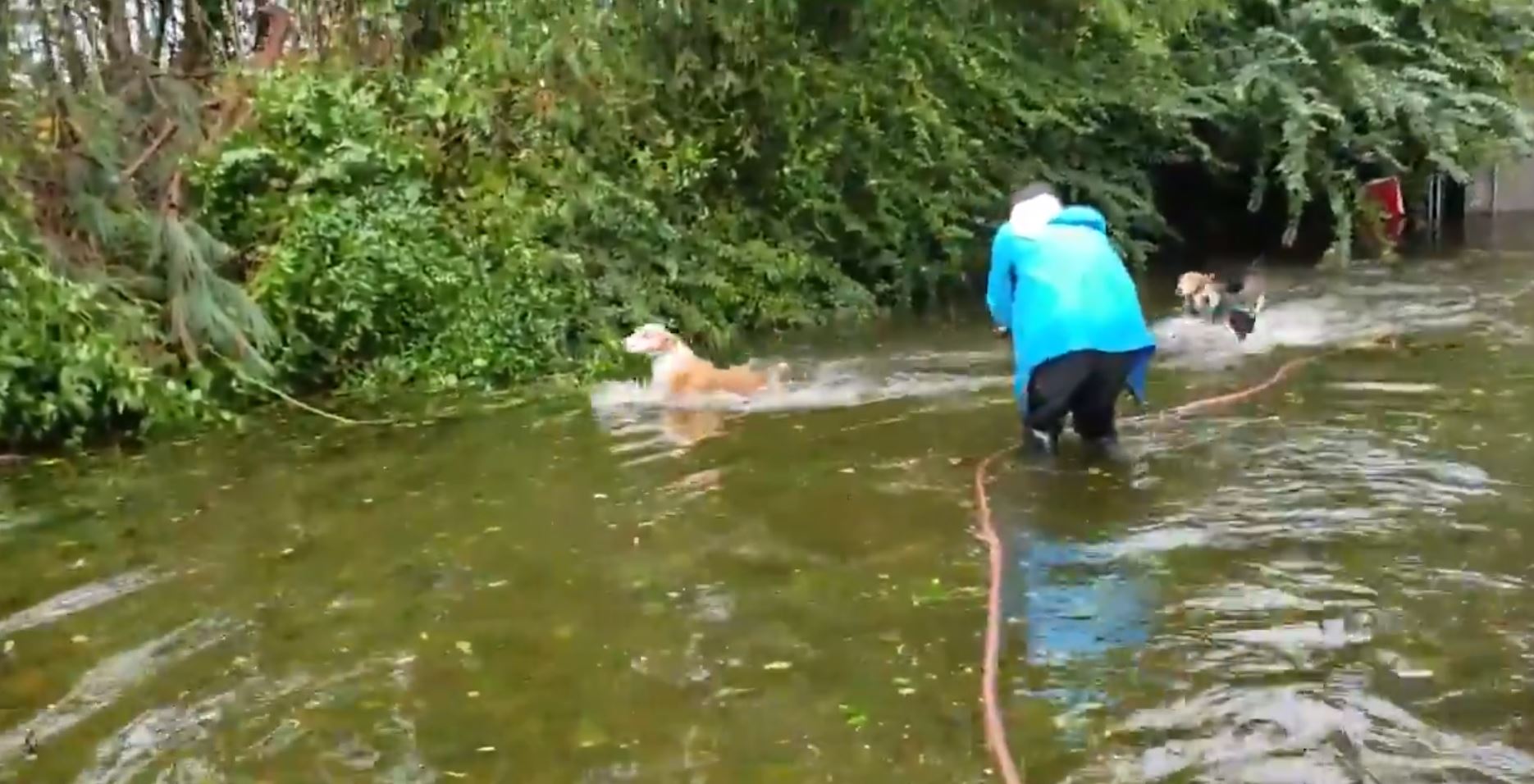 Having said all that, these doggos got lucky. While they were baying for help, panicking like f**k, and trying to force the door open, the dogs were spotted by rescuers. The two volunteers, Ryan Nicholls and David Rebollar, were able to free the dogs – and as the tweet shows, they weren’t a moment too soon! 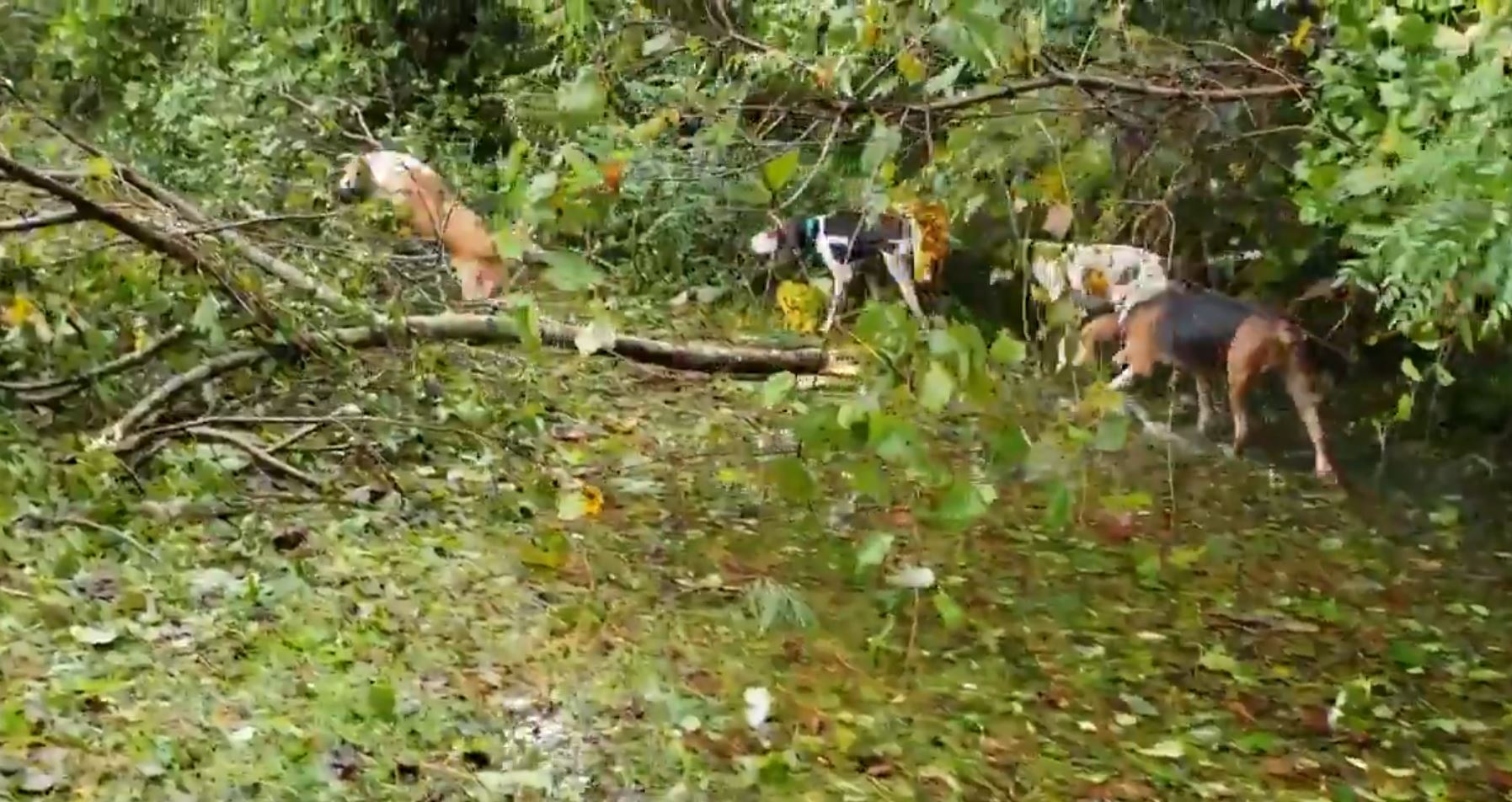 Final thought: While we always want to give the benefit of the doubt and understand this happened in a time of crisis, we can all use this as a learning moment. If you can’t take your pets with you, don’t condemn them to death by leaving them locked up. Give them every chance to get the f**k outta dodge and run for their lives. It’s only fair. As for the blokes who made the rescue, f**ken top stuff, gents, top stuff!

Rescued six dogs in Leland, NC, after the owner LEFT THEM locked in an outdoor cage that filled with flood water that was rapidly rising.

We got them out, but by the time we left, the water was so high that they would have drowned. BRING YOUR PETS WITH YOU! #HurricaneFlorence pic.twitter.com/tRibGxCjXy