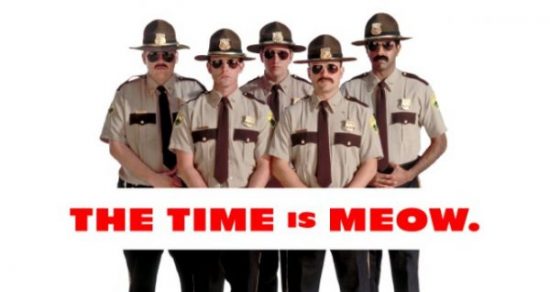 The Filming of Super Troopers 2 Has Finally Finished, You Can Get Excited Right Meow!

When you think that it’s sixteen years since the original came out you’ll realise – once you finish feeling bloody old – that this sequel has been a long time coming.  Still, watch the video below – from the movie’s Indiegogo Campaign – to see the trademark gags and humour are all in place.  And that’s fair dinkum good news.

Broken Lizard, the comedy troupe behind the now cult favourite original raised 4.4 million dollars in order to get the sequel on the road.

They began filming in 2015. The stars even posted photos to their Twitters back then. Here’s where it gets interesting: the film has already screened for some dedicated fans.  I hope those lucky wankers are some of the legends who helped raise the dollary-doos.  A whopping 56,000 people donated.  And they blew that target out of the water, raising more than double the initial target.

So why wasn’t it out sooner if some buggers have already seen it?  Apparently, Broken Lizard said, ‘yeah, nah, the sound, music and picture are all a bit like a dingo’s dinner.’  Of course, that meant we had wait to wait longer than we’d have liked, but a blog post on the Broken Lizard website says the final product is ready to go and looks ‘amazing’.

So what’s it about?

We don’t want to reveal too much but it seems markers on the Canadian/American border were in the wrong spot and the Super Troopers have to impose martial law in the ensuing chaos. Understandably, those canucks aren’t impressed.  Would you be? When can you see it?

Broken Lizard said trailers, posters and promos will launch as soon as Fox Searchlight gives them the go ahead. Someone tell ‘em to bloody hurry. We want this meow!