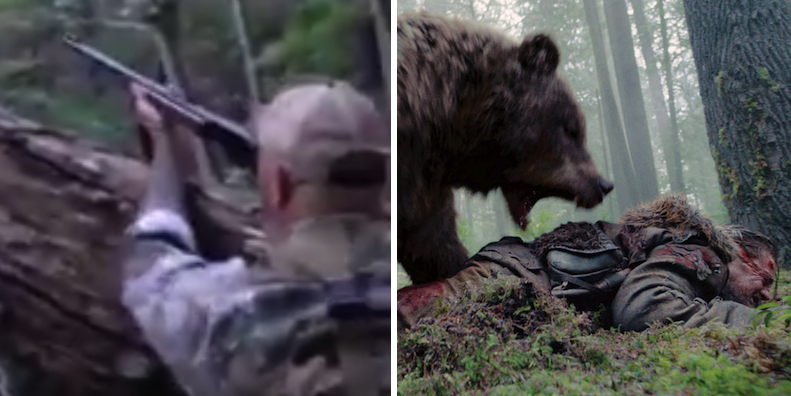 Black Bear Gets Shot Out Of Tree, Attacks Hunter Who Thought He Was Dead

One of the first rules you’re taught when hunting dangerous prey is never to approach it unless you’re 100 percent sure it’s dead. This guy ignored that rule and his mistake very nearly cost him his life.

The below footage is from a forest, somewhere in America and shows a bearded man in your classic khaki gear that gives most hunters a semi when they put it on.

A bear can be seen hanging out on the branch of a tall tree in the distance while a pack of excited dogs bark their arses off below. The cameraman talks to the hunter, explaining the best place to aim for in order to ensure an instant kill while a third hunter stands at the base of the tree, ready to grab the bear when its lifeless body plummets to the forest floor.

The hunter fires a couple of shots at the bear, hitting it. The startled beast can be seen scrabbling around the tree before being shot again. After its hit for the third time, the poor animal falls down onto the hard ground below.

The hunter standing near the base of the tree runs towards what he obviously assumes to be a bear corpse but he has made a huge error in judgment; all of a sudden, the desperate bear leaps up and launches an attack on the man, who can be heard screaming in fear and agony.

The hunter that shot the bear urgently scrambles down the leafy slope to rescue his friend as the footage ends. The video uploader wrote on YouTube that the hunter managed to survive the encounter.

“Luckily he only suffered minor injuries that will definitely leave a scar but it could have been much worse,” he said.

The uploader also added a handy tip to know if a bear is truly deceased; “Always wait for the “DEATH MOAN” from the bear to make sure it’s dead,” he wrote.

It’s unclear if the bear survived being shot and falling from such a height but if it somehow did, I reckon it’ll be looking for revenge the next time it comes across a pack of humans…

WATCH THE BEAR ATTACK ON THE PLAYER BELOW: