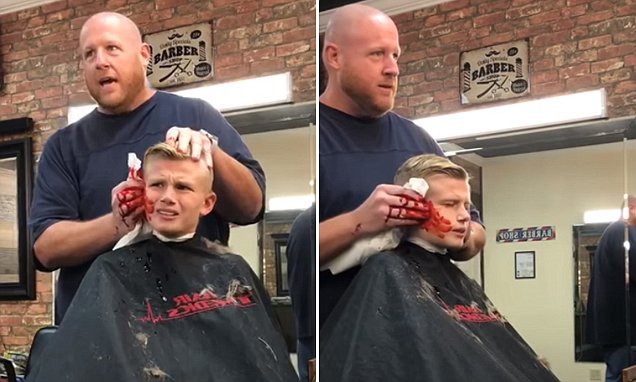 We love a bloody good prank here at Ozzy Man Reviews. It’s one of the reasons we got into this gig in the first place. Watching people pull awesome pranks on each other and reviewing the sh*t out of them is as big a part of what we do as watching animal attacks, car wrecks and epic fails. That’s why we love this barber’s cheeky little revenge prank…

Obviously, you wankers are gonna want some context. Most of it’s self-contained in the video for ya to scrutinize, but to cut a long story short, the little rascal getting his ears lowered, Vito DiPalma, and the barber, Jude Sannicandro, have some history. Apparently, the last time Vito was in he left a fake cockroach on the counter and scared the sh*t out of Jude. Classic move.

“It scared the crap out of me, especially because earlier that day there was a real cockroach in our bathroom,” Sannicandro said.

Of course, now that the little fella has come back for another haircut, Jude has revenge planned – and to make things even better, it looks like mum is in on it. As you can see from the little dude’s reactions, he fell for it hook, line and sinker.

Now, be warned, there’s a fair old touch of the Sweeney Todd about this prank, but it’s devastatingly effective. Little Vito is obviously concerned by Jude’s commentary, and you can see why. He escalates the panic level nicely. By the time he drops a rubber ear in Vito’s lap, the little dude is sh*tting broken glass. That’s real terror on his face there – and considering the circumstances and his age – he’s stoic as f**k. What a little champion he is.

Apparently, some folks have been like, “Hey, Jude, you’ve gone a bit far there!”

But he won’t let it get him down. “I wouldn’t have pulled this on anyone else but Vito. He’s a unique old soul, and I’ve been cutting his hair since he was a baby.”

Final thought: It’d be bloody grouse to see what Vito has up his sleeve next time. With regards to the critics, it certainly seems like there’s a lot of familiarity there, and with Mum in on it, it doesn’t seem like there’s much harm done. As for Vito, what a little legend for taking it so well. Good stuff, lad!