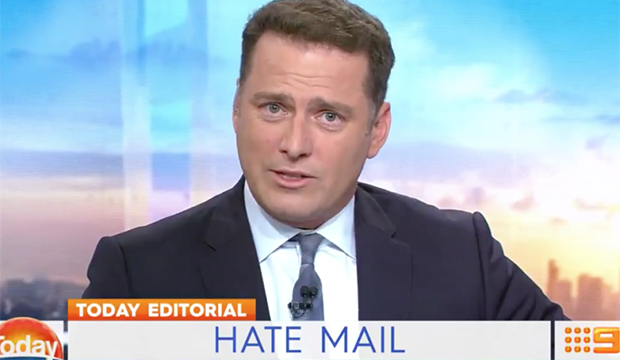 One thing we can say about Today Show host and 60 Minutes Contributor Karl Stefanovic, is that he’s not afraid to speak his mind. From coming to the defence of celebrities who’ve been mercilessly attacked by other media outlets, to openly criticising his own networks coverage of the recently returned Shapelle Corby (literally who?). The Daily Mail in the UK recently ran a story, using a picture of Stefanovic leaving a bottle-shop, and another with a female colleague, under the headline “Karl Stefanovic checks into humble caravan park with Channel Nine colleague and 12 cans of pre-mixed rum, but girlfriend is nowhere to be seen”, strongly suggesting something less than professional was going on.

Stefanovic used his spot on the Today Show to call out the Daily Mail on their bullsh*t, explaining that the colleagues were in Yamba reporting on a crisis in the prawn industry – not that he or anyone else should have to explain themselves. Yamba, and its neighbouring town across the Clarence River, Iluka, are both heavily dependent on the seafood trade and tourism for employment in the region.

Other websites have demonstrated the Daily Mail’s deliberate efforts to cover their tracks after Stefanovic’s speech became national news in Australia, and even reached many news outlets across the world. The original headline has been edited to exclude the words “but girlfriend is nowhere to be seen”, and the entire article has been edited to deflect criticisms.

The Daily Mail has even gone out of their way to capitalise on Stefanovic’s air-time, explicitly denying any wrongdoing whilst directing viewers to the edited article.

Who are the Daily Mail exactly? Well, apparently, they’re the first result that comes up when you Google “shit tabloid newspaper uk”.

Karl implores his viewers not to visit the Daily Mail, but I’m pretty sure most of us weren’t going there anyway.