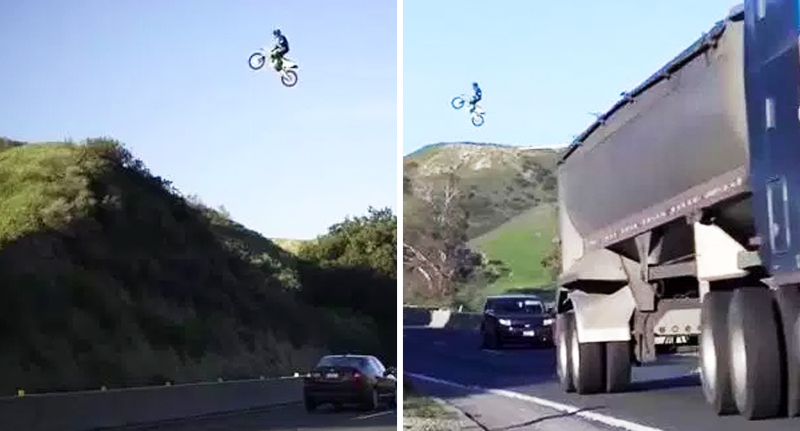 Police in Riverside County, California must be used to seeing some insane stuff nowadays. With the Joshua Tree National Park being in their area, you can bet there are a massive amount of people doing crazy things after a night out on the peyote and magic mushrooms. Sometimes an idea gets formed out in that warm desert air that is just too good to pass up. That’s at least how we’re assuming the idea for what you’re about to see was conceived.

Have you ever wondered what it would be like to soar like Superman? To fly through the air like an eagle, and effortlessly swoop over a few lanes of unsuspecting traffic?

One absolute tripper of a guy doesn’t have to wonder anymore, after performing a mind-bogglingly insane stunt that was captured by five separate cameras. Police are pursuing a man who jumped the LA 60 Freeway on his dirt bike. Presumably hoping to give him a medal and ask him for tips on how to stay steady on a bike when you have such a massive set of balls.

Ever the advocates for fun and excitement, the Riverside County police have blocked off the gigantic mound of dirt used for the stunt to stop other daredevils from having a crack at one of the coolest jumps ever completed in America.

Can you imagine driving down a freeway, minding your own business and looking up to see a man on a dirt bike flying right over you, as if it was just another day at the office for him? The obviously highly experienced rider identified as Kyle Katsandris called out his haters who claimed a pic that he posted of the jump was Photoshopped.

Looks like the industry has fallen behind #likeisaid #nolimits

Kyle responded to those claims in the best possible way on his Instagram page with the caption “The key board warriors were out in full force. Where are you now #nolimits”.

You can bet the keyboard warriors are hiding under a pile of rocks after a performance like that.

Here is the video and the news courage about the police investigation below:

The key board warriors were out in full force. Where are you now #katsandrisleap #nolimits