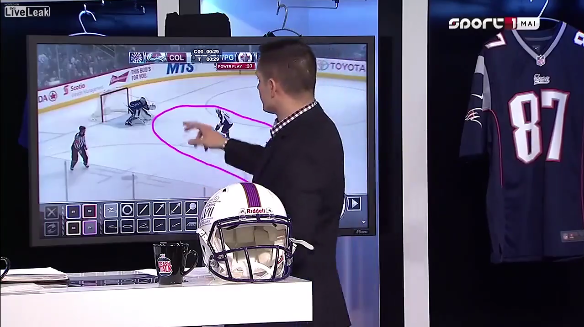 During a recent sports show in Hungary, a man had a little too much fun when he was presenting a segment on hockey.

You know those new TV screens that presenters use where you can pause live games, slow-mo certain plays and highlight certain players? Well one of the presenters decided to have a little too much fun while analysing a hockey game.

It must have been a bet with the other blokes on the panel, because they all looked pretty stunned and shocked that this guy had actually pulled it off.

The presenter started off highlighting 2 key players which seemed innocent enough, but then started to draw an arc between them. After that, the jig was kinda up as the drawing could only be described as a cock and balls. He kept going though, even demonstrating some ejaculate and drawing some hair on the balls. Talk about commitment!

Maybe he is the grown up version of Jonah’s Hill character in Superbad where the kid couldn’t stop drawing dicks? Men just love to draw dicks on things – it’s just human nature. Also remember that kid walking around with a rifle randomly shooting in California? He also had a spray can and was spray painting cars while a helicopter was overhead broadcasting his every movement live on national TV. Well you can guess what it was that he drew on a car, can’t you? Yep – a penis. One thing is for sure though – once you start drawing penises on things it’s seems to be hard to stop at any age. Even working on live TV doesn’t seem to stop this man from drawing a huge boner.

Check out the full video below: