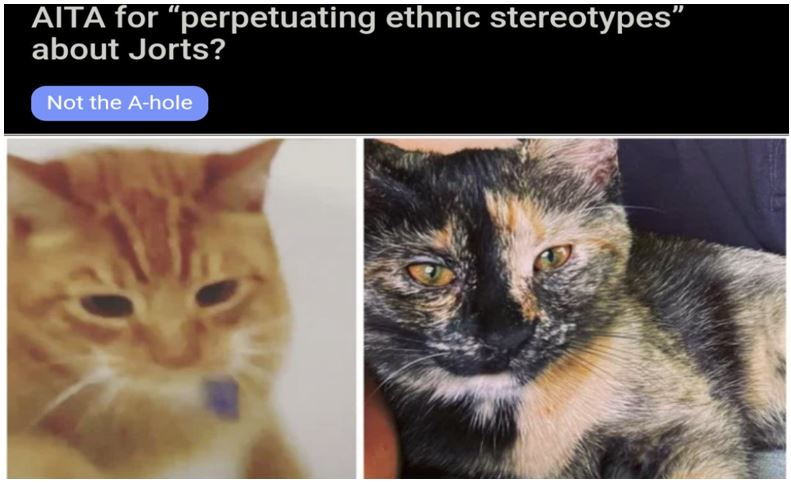 Anyone who’s worked in an office has probably experienced workplace politics at some time or another. Yeah, nah, it’s one of the unfortunate aspects of working with people. Unfortunately, it can be set off by the littlest things. Just ask the office that recently melted down after two people came into conflict over the new office cat was introduced.

Before we go into any detail, we need to give you a little bit of context here. The unnamed office already housed one cat, Jean before Jorts came along. According to the original poster of an AITA thread, “One of the cats (Jean) is a tortoiseshell cat we have had for years. The other cat (Jorts) is a large orange cat and a recent addition.” 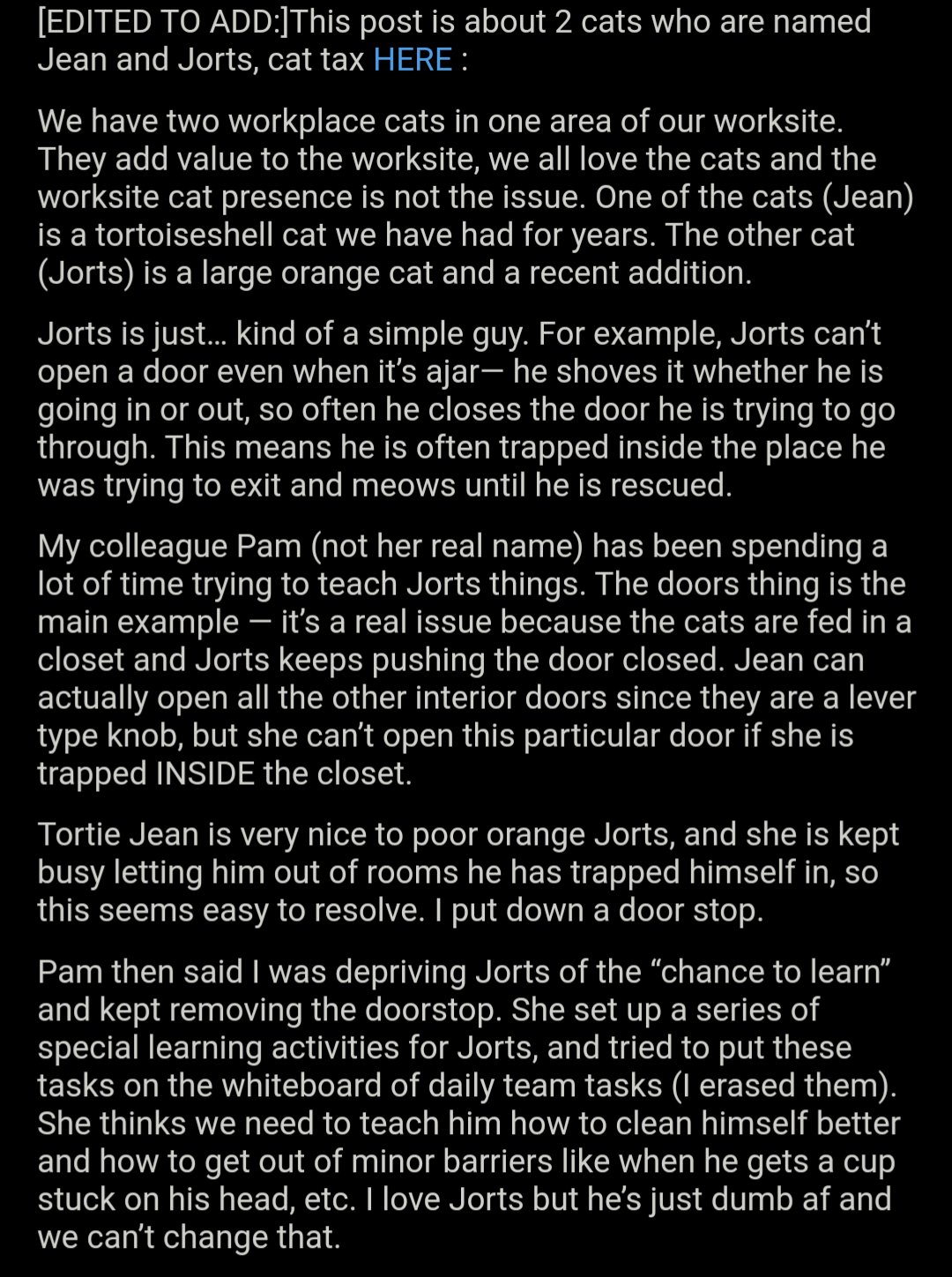 Basically, Jean is a pretty capable cat. Jorts on the other hand, well, “Jorts is just… kind of a simple guy. For example, Jorts can’t open a door even when it’s ajar— he shoves it whether he is going in or out, so often he closes the door he is trying to go through. This means he is often trapped inside the place he was trying to exit and meows until he is rescued.” 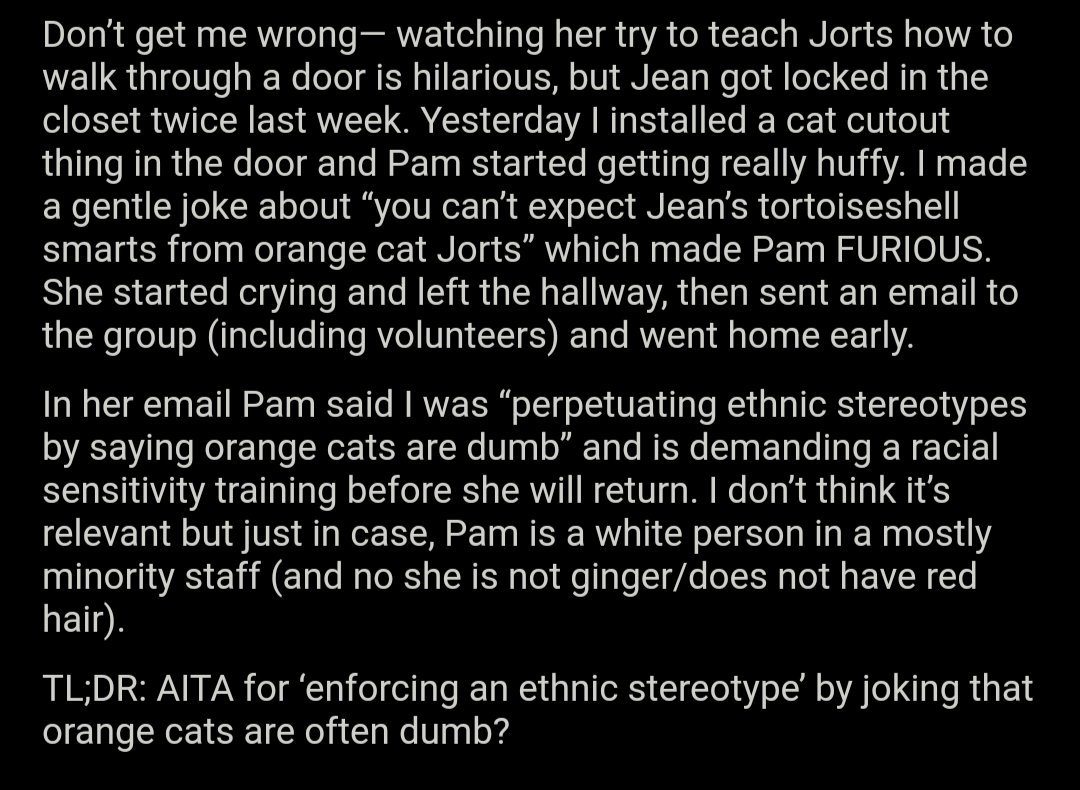 And this is where the conflict comes in. One of the office employees really wanted to help Jorts. The OP really wanted to just get on with her work, as you’ll see here: “My colleague Pam (not her real name) has been spending a lot of time trying to teach Jorts things. The doors thing is the main example…I put down a door stop. Pam then said I was depriving Jorts of the “chance to learn” and kept removing the doorstop. She set up a series of special learning activities for Jorts, and tried to put these tasks on the whiteboard of daily team tasks (I erased them).” 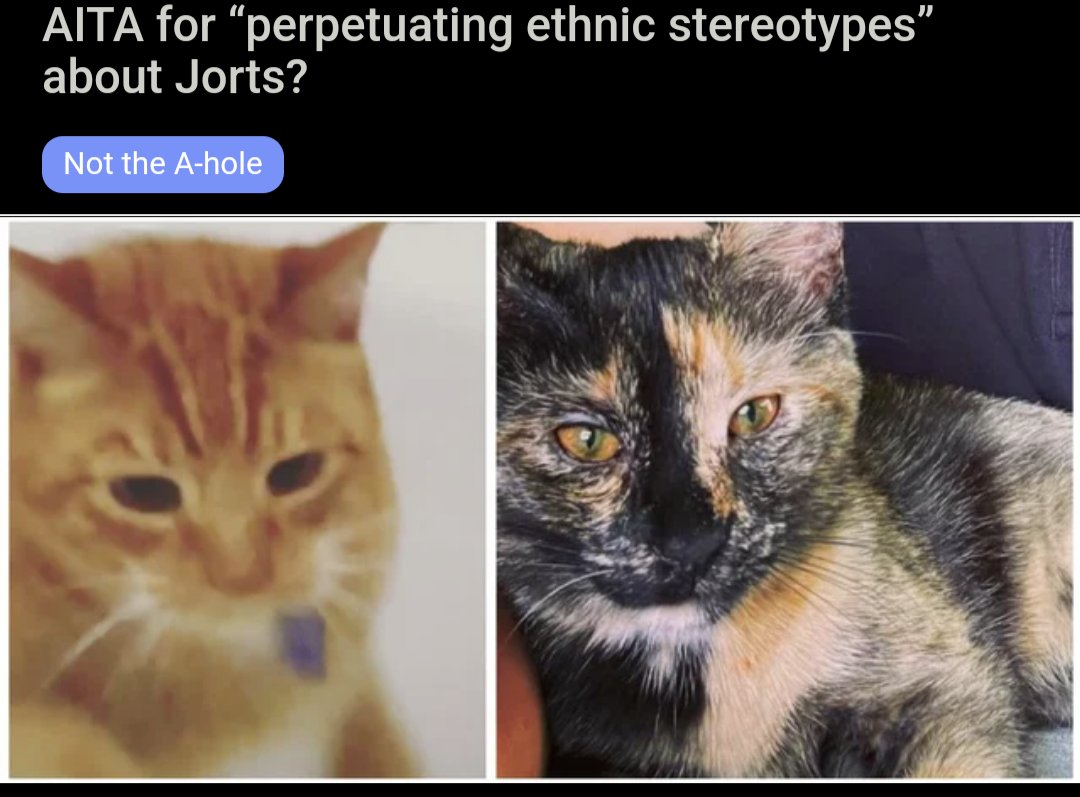 From here, anyone who knows office politics knows that things are gonna escalate. Kinda like this: “Yesterday I installed a cat cutout thing in the door and Pam started getting really huffy. I made a gentle joke about “you can’t expect Jean’s tortoiseshell smarts from orange cat Jorts” which made Pam FURIOUS. She started crying and left the hallway, then sent an email to the group (including volunteers) and went home early.” 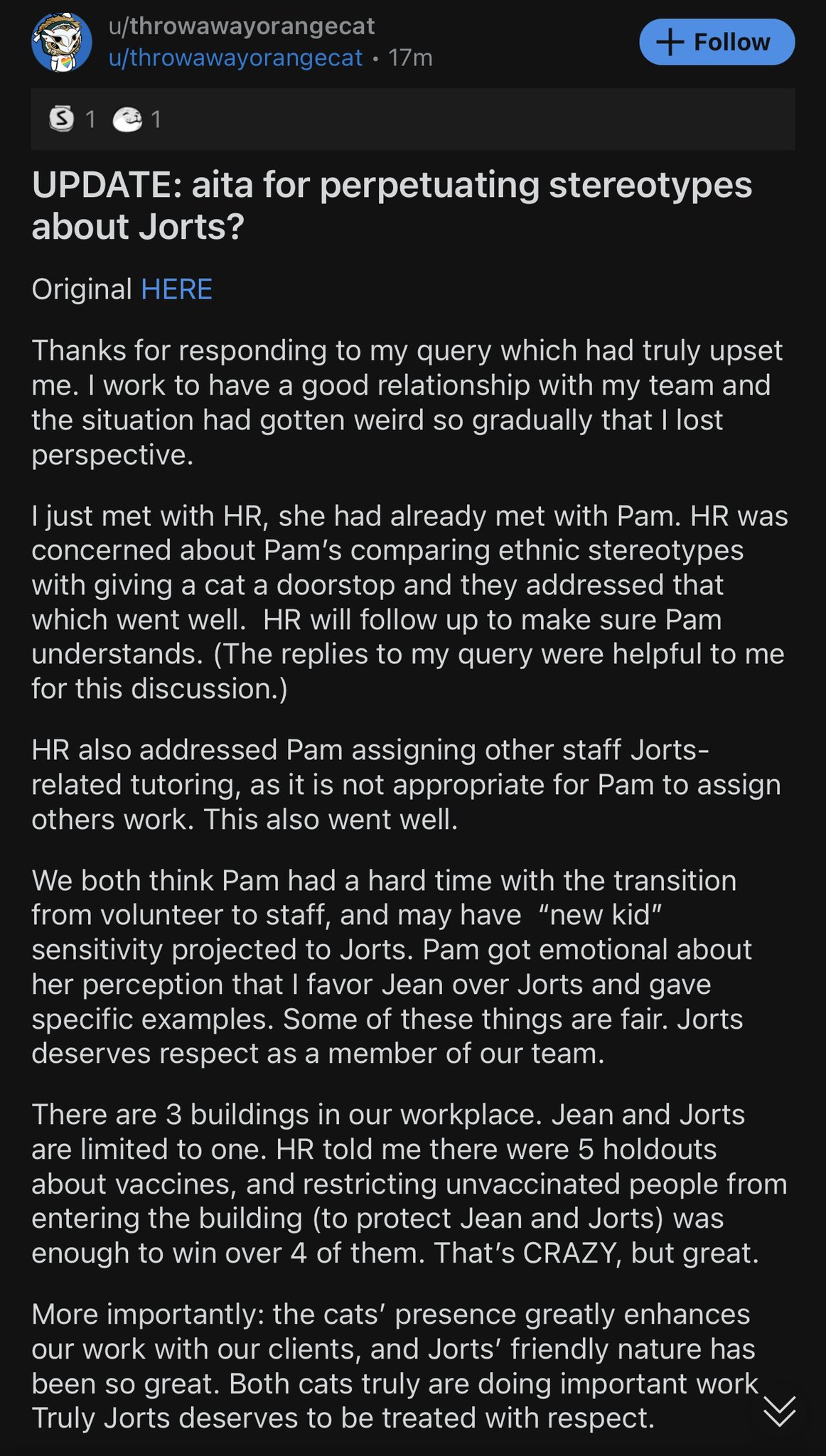 Now, that email is interesting. Check this out: “In her email Pam said I was “perpetuating ethnic stereotypes by saying orange cats are dumb” and is demanding a racial sensitivity training before she will return. I don’t think it’s relevant but just in case, Pam is a white person in a mostly minority staff (and no she is not ginger/does not have red hair).” 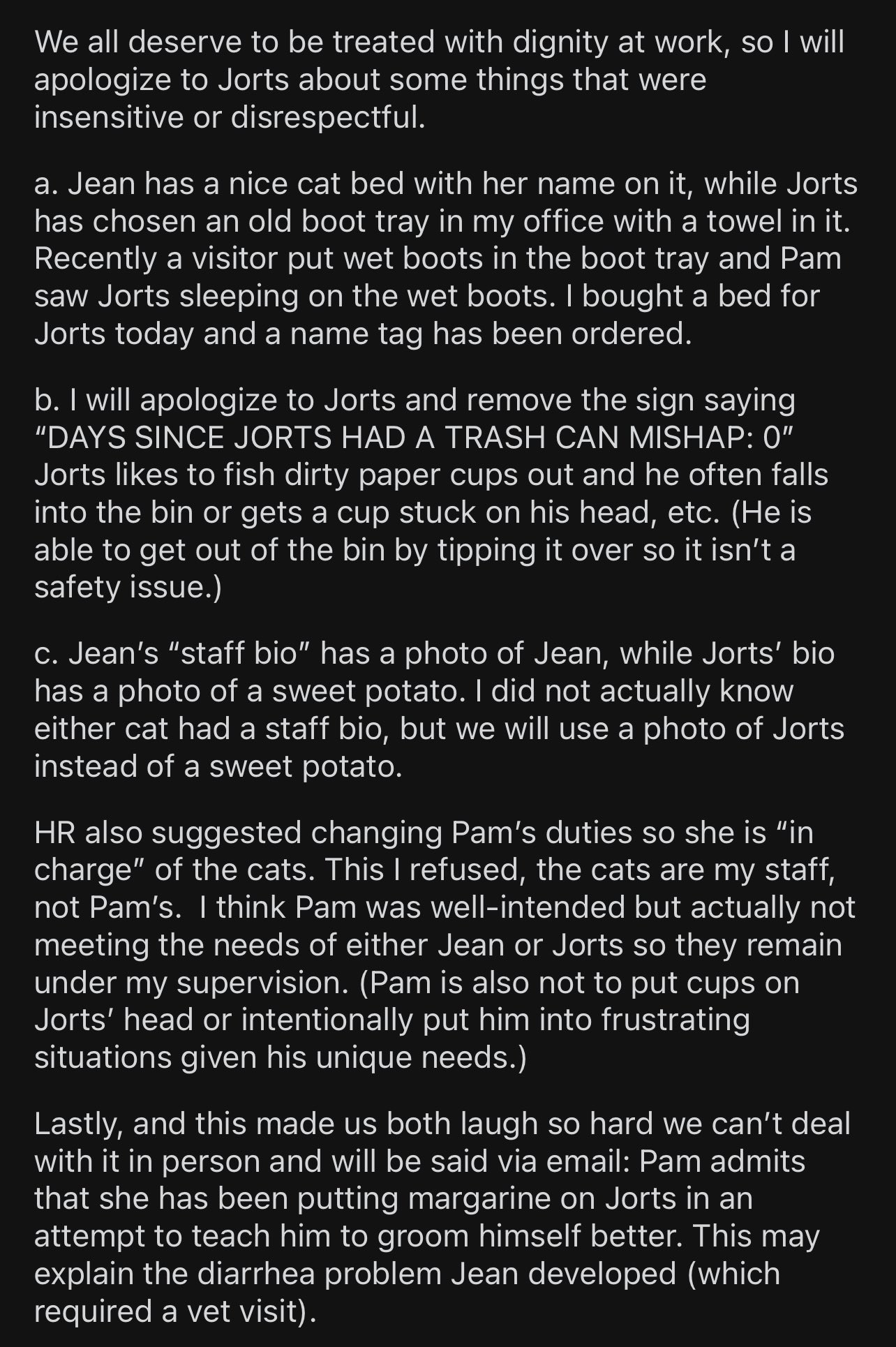 As you can imagine, there’s a lot more to this, and the update is well worth checking out, particularly as it reveals cats were buttered, and mediation was held, but we’re gonna keep it simple. As this was an AITA thread, people voted on whether or not the OP was the ‘Asshole’ and they decided that no, the OP was not an asshole.

Still, the whole thing has gone viral and has even resulted in Jorts-based poetry. So, yeah, this one’s really resonated with people, and we get it – there’s office drama and cats. You’ve gotta love that s**t!

This is just what Jean said

I have cleaned
the cat
which you
marg'rined

and which
you were probably
hoping
would learn to clean himself

Final thought: Anyway, while we’re on about office politics, spill the beans on your experiences with office-based bulls**t. We could all do with a bit of a laugh right now. Cheers, you legends!